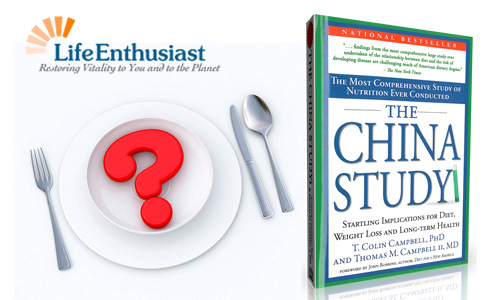 In January 2005, a book titled The China Study was published in the USA, written by T. Colin Campbell; over the years it has become one of the Americas best-selling books about nutrition. Campbell, born in 1934, is a biochemist with a specialization in nutrition and long-term health. His book is the result of a scientific study called the China-Cornell-Oxford Project, in which Campbell served as one of the directors. The project studied mortality rates from cancer and other chronic diseases in 65 different counties in China, comparing them from village to village, taking into consideration dietary habits of people involved in the study. The study was supposed to confirm that consumption of animal products increases cancer rates, favoring a plant based Vegan diet as the optimal choice for humans. The results and the book itself brought a lot of controversy among people. Promoters of Vegan and Vegetarian diets were excited, meat eaters were of course strictly against it, and to this day this book is passionately discussed between the two groups. Some say it was written to push Veganism, because the author himself is an advocate of low fat Vegan diet.

It is often, jokingly, said that The China Study is more talked about than actually read. Individuals who do not agree with the concept are often accused of not reading the book at all and proponents of it are indicted for mistaking correlation and causation. The book has over 400 pages jammed with nutrient information, so it really is not an easy read, the amount of information is overwhelming, and a reader doesn’t really need to see the answers in those pages right away. There are a lot of critics of The China Study, and yet also a huge fan base. It is hard to take an objective stance on the subject; we will always be influenced by our own beliefs, education, and the way we were raised.

The truth is that the book is titled The China Study for a reason: the project was focused on China. A study based on Chinese people could only bring results applicable to Chinese people. If you think about for example an Inuit family, can you imagine them staying away from animal foods, only aiming for a plant based diet? It doesn’t work for their Metabolic Type, or the local food supply. Even though The China Study has a few great points in criticizing health care systems, processed foods, and demonizing carbohydrates, its actually very difficult to agree with the concept that every single person on the planet should have the same diet, because that simply is not true. We have to respect our own metabolic individuality when looking for an optimal diet for each and every one of us. My diet is not the same as yours, South Americans for sure have different nutritional needs than Scandinavians, and so on. They also have a different options: Alaskans cant grow coconuts, and there will be no carrot harvest in the middle of the desert.

The food chain is not a theory, but rather a simple, natural, fact. People are omnivores by nature. Ruminants are designed to eat grass, with their complex digestive systems and body composition that makes them able to lower their heads down to the ground and chew on grasses. There are a few key nutrients in animal foods we cannot get when eating only plant based foods. While Campbell’s book declares that folic acid can be derived exclusively from plant based foods, we know that organ meat is the most folate-dense food on the planet; for example chicken liver contains even more folate per gram than spinach. Dr. Chris Masterjohn in his critical review of the China Study points out that Campbell ignores the role of gluten in autoimmune diseases, while there are 19 pages in the book discussing the same problem, but placing blame on cows milk. There is an excellent book by Denise Minger called Death by Food Pyramid, which is an in depth review and examination of the China Study. Even doctor Weston A. Price, a dentist who studied the relationship between nutrition and health was aware of the fact that every culture thrives the best on their original indigenous diet. His work is further promoted and continued via the Weston A Price Foundation and its president Sally Fallon Morell.

The best thing we can do as individuals is trust our bodies and do everything we possibly can to fulfill their needs. Reading the above mentioned books and studies can give you a lot of very good, but still very general, information. The way to get optimal health for your own individual body is by respecting its needs and metabolic type. No book or diet magazine will ever be able to give you objective advice, except this one point that is often used and usually underrated: Listen to YOUR body. Listen to its signals, give it what it needs to provide you with strong, healthy, and physical capability for the highest quality life possible. Determining your nutritional needs can be easily done via metabolic typing, which our Life Enthusiast health coach can work on with you collaboratively. It may be the very first, but most important step on your journey to reclaim your health. Don’t try to replicate someone else’s diet advice; you are a unique snowflake and you should treat yourself that way.