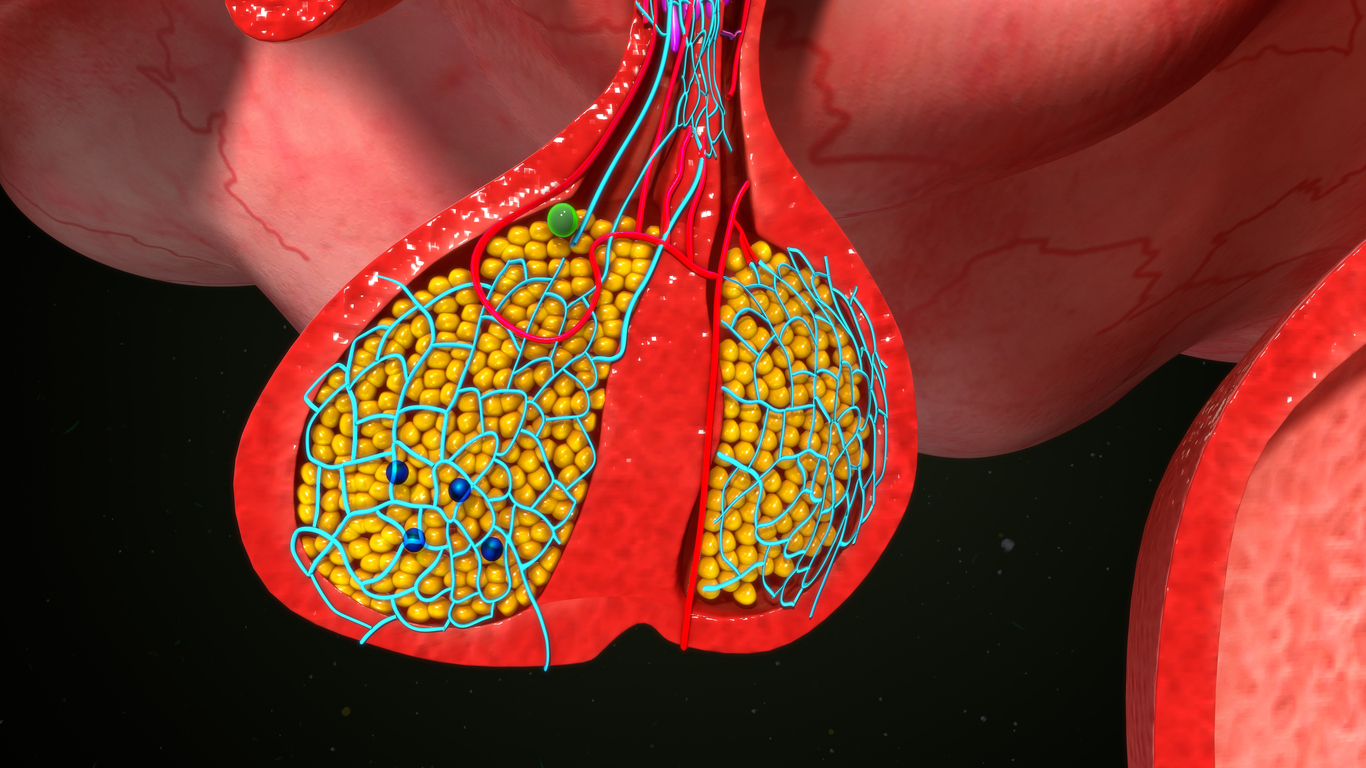 The pituitary (or hypophysis) is a small gland, no larger than a pea, located at the base of the brain in the small depression of the sphenoid bone called the sella turcica. It is controlled by the hypothalamus to which it is attached and is sometimes referred to as the master gland because its function is to coordinate the nervous system and the endocrine system. Some of its hormones stimulate other endocrine glands to produce their own hormones. This small gland is actually two glands: the anterior pituitary gland (or adenohypophysis) and the posterior pituitary gland (or neurohypophysis). This gland produces several hormones. One of the pituitary hormones regulates the retention of water by the kidneys. Another causes the uterus to contract during childbirth, and then stimulates the production of milk in the mammary glands. One of the most important pituitary hormone is a growth hormone (GH). This hormone controls growth by regulating the amount of nutrients taken into cells. The growth hormone also works with insulin to control the level of blood sugar.

The tissues in the anterior lobe consist of extensive vascular areas interspersed among glandular cells that secrete at least six different hormones. It was formerly believed that a master molecule was stimulated by various enzymes to produce these hormones, but present evidence indicates that each is individually synthesized, probably by a specific type of glandular cell. Three such types of cells exist in the anterior pituitary gland: acidophils, basophils, and chromophobes. The growth hormone, thought to be synthesized by certain acidophils, stimulates all the tissues in the body to grow by effecting protein formation.The remaining five important hormones influence body functions by stimulating target organs. Adrenocorticotropic hormone (ACTH) controls the secretion of steroid hormones by the adrenal cortex, which affects glucose, protein, and fat metabolism; thyrotropin controls the rate of thyroxine synthesis by the thyroid gland, which is the principal regulator of body metabolic rate; prolactin, which regulates the formation of milk after the birth of an infant; and three separate gonadotropic hormones (follicle-stimulating hormone, luteinizing hormone, and luteotropic hormone) control the growth and reproductive activity of the gonads.

The release of each of the hormones from the anterior lobe is controlled by a specific substance secreted by nerve cells in the hypothalamus. These substances, called releasing factors, are transmitted by nerve fibers to tiny capillaries in the hypophyseal stalk. They move through blood vessels to the anterior lobe, where each releasing factor is responsible for the release of a specific pituitary hormone. The two hormones that are produced by the posterior lobe are synthesized by nerve cells in the hypothalamus. They are transported by nerve fibers to nerve endings in the posterior lobe, where they are released. The hormones are antidiuretic hormone (ADH or vasopressin), which alters the permeability of the kidney tubules, permitting more water to be retained by the body; and oxytocin, which aids in the release of milk from mammary glands and causes uterine contractions. The only hormone that is synthesized by the intermediate lobe is the melanocyte-stimulating hormone, which appears to control skin pigmentation.

Growth hormone or somatotropin, glycoprotein hormone released by the anterior pituitary gland that is necessary for normal skeletal growth in humans (see protein). Evidence suggests that the secretion of human growth hormone (HGH) is regulated by the release of certain peptides by the hypothalamus of the brain. One such substance, called somatostatin, has been shown to inhibit the secretion of HGH. HGH is known to act upon many aspects of cellular metabolism, but its most obvious effect is the stimulation of the growth of cartilage and bone in children.

Adrenocorticotropic hormone, polypeptide hormone secreted by the anterior pituitary gland. Its chief function is to stimulate the cortex of the adrenal gland to secrete adrenocortical steroids, chief among them cortisone. The release of adrenocorticotropic hormone (ACTH), also known as corticotropin, is stimulated by corticotropin-releasing factor (CRF), a secretion of the hypothalamus. ACTH secretion is an excellent example of the regulation of a biological system by a negative-feedback mechanism; high levels of adrenocortical steroids in the blood tend to decrease ACTH release, whereas low steroid levels have the opposite effect. ACTH has the same pharmacologic and clinical effects as cortisone when given intravenously or intramuscularly; however, it has no value when applied externally and cannot be taken orally since it is deactivated by digestive enzymes. The action of ACTH is contingent upon normally functioning adrenal glands and is therefore useless in disorders caused by adrenal insufficiency, e.g., as replacement therapy where both adrenal glands have been removed.

Thyrotropin or thyroid-stimulating hormone (TSH), hormone released by the anterior pituitary gland that stimulates the thyroid gland to release thyroxine. The release of thyrotropin is triggered by the action of thyrotropin-releasing factor (TRF), a substance found in the hypothalamus of the brain. TRF, once released from the hypothalamus, travels in the bloodstream to the anterior pituitary, where it causes the release of thyrotropin. This latter substance, a glycoprotein (see protein), is carried to the thyroid gland by the blood, where it stimulates the uptake of iodine, the conversion of diiodotyrosine to thyroxine, and the secretion of thyroid hormones into the bloodstream. Thyroxine inhibits the further release of thyrotropin by interfering with the action of TRF; thus the levels of thyroid hormones are regulated. If not enough iodine is available in the diet, then not enough thyroxine will be made to shut off the release of thyrotropin. Prolonged stimulation of the thyroid by thyroid-stimulating hormone results in an abnormal enlargement of the gland, known as goiter, a condition which has been largely eradicated by the widespread usage of iodized salt.

Gonadotropic hormone or gonadotropin,any one of three glycoprotein (see protein) hormones released by either the anterior pituitary gland or the placenta (the organ in which maternal and fetal blood exchange nutrients and waste products) that have various effects upon the ovaries and testes (see testis). Gonadotropin-releasing hormone (Gn-RH) is produced and released from the hypothalamus. Gn-RH release stimulates the secretion of both follicle-stimulating hormone (FSH) and lutenizing hormone (LH) from the pituitary gland. Gn-RH is a peptide composed of ten amino acids which are synthesized in the hypothalamus (that portion of the brain nearest the pituitary).

This hormone travels in the bloodstream to the anterior pituitary, where it causes the release of the gonadotropic hormones. The hormones FSH and LH inhibit the amount of Gn-RH released by a mechanism called “negative feedback.” In the female, FSH causes an increase in the weight of the ovaries and encourages the growth of Graafian follicles (containing maturing eggs); in males, FSH produces spermatogenesis in the testes. In females, secretion of LH is associated with the maturation of the follicles, the manifestation of heat (or estrus), and the release of the egg from the follicle, which is transformed into a corpus luteum. In males, LH stimulates the testes to release testosterone.

Sex hormones released from the ovaries and testes eventually reach the hypothalamus and help to regulate the hormonal cycle. Human chorionic gonadotropin (HCG), produced in the placenta, helps to maintain pregnancy once a fetus begins to develop. It appears in the urine in approximately the first week after the first missed menstrual period, and is the basis for two kinds of pregnancy tests; in the Ascheim-Zondek testm it causes the ovaries of an immature female rat or mouse to gain weight and produce ripened follicles, and in the Friedman test, it stimulates female rabbits to ovulate.

Antidiuretic polypeptide hormone secreted by the posterior pituitary gland. Its principal action is to regulate the amount of water excreted by the kidneys. Antidiuretic hormone (ADH), known also as vasopressin, causes the kidneys to resorb water directly from the renal tubules, thus concentrating the salts and waste products in the liquid, which will eventually become urine. ADH secretion by the pituitary is regulated by neural connections from the hypothalamus, which is believed to monitor either the volume of blood passing through it or the concentration of water in the blood. Dehydration or body stress will raise ADH secretion and water will be retained. Alcohol inhibits ADH secretion. Failure of the pituitary to produce ADH results in diabetes insipidus. In pharmacological doses ADH acts as a vasoconstrictor. The structure and chemical synthesis of ADH was announced (1953) by Nobel laureate Vincent Du Vigneaud and others.

Oxytocin, hormone released from the posterior lobe of the pituitary gland that facilitates uterine contractions and the milk-ejection reflex. The structure of oxytocin, a cyclic peptide consisting of nine amino acids, was determined in 1953 and in the same year it was synthesized in the laboratory. Both oxytocin and antidiuretic hormone are biosynthesized in the hypothalamus of the brain and travel down neuronal axons to the posterior pituitary, where they accumulate prior to release. Stimuli that elicit the release of oxytocin include childbirth, suckling, and coitus; the uterine contractions that result may facilitate either childbirth or the ascent of spermatozoa through the fallopian tubes. Oxytocin may also play a role in the initiation of labor. The milk-ejection response occurs only in females immediately after childbirth. Oxytocin in males is not well researched beyond its role in relationship bonding.