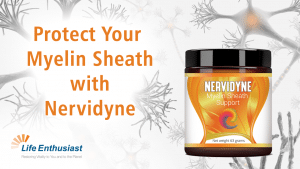 Learn how nervonic acid affects the function of the nerves, signal transmission, and sensory reactions. Especially if you have neuropathy, or overly reactive senses, this talk will make sense to you.

Martin: Hi, everybody! Martin Pytela here, for Life Enthusiast radio and TV network, coming to you with a special guest, Spencer Feldman, the chief product developer and CEO at RemedyLink! Spencer, I would like to talk to you about this wonderful product that you made, called Nervidyne. Would you be so kind and explain what it is about? What does it do?

Spencer: Sure! So, you know, I’m in the detox world, and one of the first things I remember seeing was the video from University of Calgary, you can see that video on the screen right now, that shows the mercury vaporizing off a tooth filling and you can see under a microscope this vapor dissolving the myelin sheath right off a nerve.

Martin: I remember this video very well. That was the one video that showed me what was going on in my body. I had twelve mercury fillings put in my mouth when I was twenty-five. And I tell you, within two years I was a wreck. And within five years I was really badly off. My story is well known here at Life Enthusiast, it is indeed my journey from okay to terrible back to sort-of-okay, that’s a journey of dealing with mercury, so I wish I had met you back in 1981 when it hit me.

Spencer: You mean when I was in high school? (laughing) Yeah, mercury is a huge problem. It mimics sodium, so it blocks of the sodium channels, and it melts the protective myelin sheath right off the nerve tissue. Even if we detoxify it with EDTA and DMSA and alpha lipoic acid, we are still left with this damage to the nerve! So I was thinking: Okay, how do you recover nerves? They’re very slow to heal! Specifically, what can I do for the myelin sheath? And if you look at babies, if you study myelin, and the myelination process, you find that babies are not born with completely myelinated nerves, and it is something that they develop as they get older!

The breast milk of the mother – and this is why it’s really important to breastfeed children – contains nervonic acid. If you are listening and you are a milk formula manufacturer in this world, please have the nervonic acid added into your milk formula, please do that.

Martin: Spencer, can this substance be bought? Is nervonic acid an ingredient in a chemical catalogue company?

Spencer: It’s almost impossible to find this stuff. Nervonic acid is made by breast milk, and it is the raw material to build the myelin sheath. The mileage. I did source some nervonic acid, we put it in the Nervidyne product, along with a few other things, I am taking it personally as a nutritional supplement. I am not making any claims for it, but all our products are here for research purposes, so if you understand what nervonic acid does and you want to try some, get some Nervidyne to see what it will do for you.

Martin: Well, we are always allowed to make structure and functional claims! The structure is: there is a nervonic acid in it, and functional: it helps the body rebuild the sheath around the nerves!

Spencer: Nervonic acid may do some amazing things! A long time ago it was sourced from shark liver oil and some other things high in nervonic acid, but they are hard to get now. There is a maple tree in Asia, the purpleblow maple tree, that for some reason, has nervonic acid in its nuts and seeds, so you can get it from there.

Martin: Great! So other than nervonic acid, what did you put in there?

Spencer: There’s a little bit of lion’s mane, which is a TH1 stimulant. People who have MS (multiple sclerosis) are already probably TH1 dominant, so…

Martin: …they need an antidote.

Spencer:  Right! So once I understood this, I added something to counter that to the next batch of Nervidyne as I was developing the product. But for the current batch that is now being sold, there’s a note on the website that says: Please go and take some Turmeric with Nervidyne, to push back towards TH2, if you happen to work with TH1 dominance.

Martin: Yeah, if you go up on the Internet, there are articles that explain the TH1 and TH2, they are the two different branches of the immune system, one is the humoral and the other is the cellular, or cell-mediated. Whichever you may be dominant in, you need to support the other side, or else you end up with imbalances. There are illnesses that are indeed associated with dominance of either one or the other.

Spencer: Right, and not only do you need Th1 and Th2 to be in balance, I think you want them both pretty low, because the lower your globulins, the higher your albumin. And the higher your albumin, the longer your life span! Albumin is one of the keys to intelligence and health throughout the life cycle. Th1 is what goes after things like intracellular parasites, and cancer, and natural killer cells are part of that. But too much Th1 cause autoimmunity issues, like Hashimoto’s. Th2 is linked to all the sinus stuff, allergies… So a little bit of it protects you from airborne stuff that can get in and cause allergy symptoms, but too much Th2 makes a person hyper-allergenic! So not only do I want a balance of them, but I want them both as low as possible, while still maintaining health, so that my globulins go down, which brings my albumins up.

One of the quick ways that I check Th1 or Th2 with my clients is placing an ultrasound transducer on the thyroid, and I kind of get a rough sense of how vascular it is. When there is no vascularity in the thyroid, some people say: oh, great, no, Hashimoto’s! But I’m thinking: well, yeah, but maybe it’s a Th2 dominance. And if I see a lot of vascularity, well, that’s also a problem. So I want the right amount of vascularity. Also, Th1 and Th2 is modulated by sunshine. The other day I saw these two young girls, they are twins, and they both had lots of vascularity in their thyroid. I’m thinking: alright, you know I am not a doctor, I’m not making a diagnosis, but is that Hashimoto’s? And I remember looking at their skin, they were very pale, so I left a message for their dad, saying:  “You might want to have your kids get little more sun. And here’s why.”

So, you know, it’s great to be able to find the lifestyle changes for someone, that can shift them into a better long term life because if these kids don’t change, you know what’s gonna happen to that thyroid in a five, ten years?

Martin: Okay, So we have lion’s mane for the Th1 and what is the other ingredient for Th2?

Spencer: A little bit of turmeric. Just to balance it out. Mostly what I’m looking for is the nervonic acid. The lion’s mane I’m adding for the nerve growth stimulation, but then turmeric for balance.

Martin: Turmeric on its own is a fantastic antioxidant and has benefits galore!

Spencer: But not for someone with Th2 dominance, right? I was so bummed when I realized I can’t juice turmeric anymore because I’m Th2 dominant, so no turmeric for me.

Spencer: It’s okay, for me, Vitamin E is my friend. That’s the one that boosts Th1.

Martin: Great. Okay! Anything else you want to add about the Nervidyne?

Spencer: I would say this: we really don’t have the clinical experience to know how it’s going to pan out. But if you’re going to get Nervidyne, to be fair, get at least three bottles of it. Because nerves are slow, they take time to recover.

Martin:  And the dosage? Would it vary, or is it pretty much the same for everyone?

Spencer: Well, I would go by body weight. I made the serving size based on 150 lbs person.

Martin: Can you take too much? It is not toxic, right?

Spencer: I took an enormous amount when I first made it, just to find out, and a person ate it just to find out. I took maybe a one or two month dose at one shot, just to see what would happen. I got a little punch drunk, you know, I felt a little altered. It wasn’t uncomfortable, and after ten or fifteen minutes it passed, but let me tell you what happened a couple of days later! I realized that the peripheral neuropathy I had given myself from eating so much fruit when I was younger, that went away!

Martin: Fantastic, so there is a case to be made for shock treatment!

Spencer: You know, there may be! The peripheral neuropathy has come back a little bit, but after that one time, it’s never been as bad as it once was. It doesn’t hurt to walk on carpets, I don’t get pins and needles, I don’t mind getting a foot rub. All these things may not make sense to you, but if someone has peripheral neuropathy, they’ll understand what I’m talking about. What happens with peripheral neuropathy is the nerves interprets normal touch as pain. So, yeah, I was thrilled to be able to get a foot rub again!

Martin: Awesome! Okay, so this is Nervidyne! Thank you, Spencer! This is Martin Pytela, health coach on www.life-enthusiast.com, call me at (866) 543-3388! We are restoring vitality to you and to the planet. Thank you for listening!