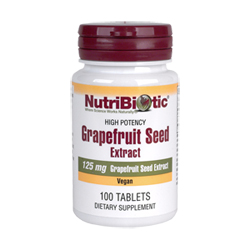 The Citricidal Story
Citricidal was originally developed by a German physicist and immunologist, Jacob Harish, as an antiparasitic. Dr. Harish was finally in the 1960s able to convince researchers at the University of Florida at Gainesville to experiment with the use of grapefruit extract as an alternative to then-current chemicals for the protection of fruit and vegetables. They were quickly won over with GSEs amazing ability to inhibit the growth of not only parasites, but fungi and bacteria as well. Tests conducted by the U.S. Dept. of Agriculture in the early 1980s confirmed that Citricidal, as it was then called, was effective in inhibiting viral strains in cattle and hogs, and was approved for the USDAs Evian Influenza Eradication Program in 1984. Sadly, USDAs promise to investigate further uses for Citricidal in these areas has never materialized.

Since the mid-1980s, the production team at Citricidal worked closely with Dr. Harish, perfected the manufacturing process, opened new facilities, and pioneered the use of Citricidal beyond its original application. Citricidal? is synthesized from the polyphenolic compounds found in grapefruit seed and pulp. Numerous reactions are involved, including distillation, catalytic conversion, and ammoniation. The active component of Citricidal is a quaternary ammonium chloride (a diphenol hydroxybenzene reacted with ammonium chloride) similar to benzethonium chloride when analysed in accordance with USP XXII/NF XVII. (Benz. Chloride is a powerful germical agent, but is highly toxic to all animal life. See info on toxicity, below)

Residues of pesticides, fungicides and preservatives have always been a concern with regards to our product. The use of these compounds is common in the agricultural and botanical industries in the United States as well as abroad. In addition, the extraction processes involved in botanicals would not necessarily remove these compounds. Therefore, every batch of Citricidal is certified for the absence of such residues, as well as the absence of Triclosan, a common germicide and preservative. Independent labs have confirmed these results. (see United States Testing Company Report No. 405993, dated 9/8/95). The results show no trace of triclosan, while displaying very strong antimicrobial activity. Every batch of Citricidal is tested and certified free from chemical and heavy metal contamination. And in an attempt to further improve the product, a source of grapefruit seed and pulp from Certified Organically Grown grapefruits has been secured.

To further show the safety of Citricidal, an Acute Oral Toxicity Study was performed (see Northview Pacific Labs Report No. X5E015G, dated 7/6/95). Results showed that Citricidal is considered non-toxic by oral ingestion with an LD50 of over 5000 mg/kg of live body weight. This is the equivalent of a 200 lb. person drinking close to 1 lb. of pure Citricidal daily for two weeks, before risking a 50% risk of fatal poisoning. (There are close to 20,000 drops in one pound of Citricidal liquid. The recommended adult dose is 5-6 drops at a time.) According to the Association of Poison Control Centers, the AMA Physician Reporting System, and the Journal of Emergency Medicine, there have been no reports that Citricidal has ever harmed anyone. In fact, there are thousands of clinical and anecdotal reports that Citricidal has helped many, and enjoys a safety record going back more than 30 years.

Over the years, numerous and differing analytical tests have been performed to determine the active components of Citricidal. The test results have quite often varied, for the following reasons: a.) varying test procedures, b.) different chemicals used in the test procedures producing false positives, c.) different interpretations of test procedures resulting in false positives, and d.) the different background of the chemists involved, organic chemistry vs. inorganic chemistry being an issue. The similarity in molecular weight between Citricidal and both Benzelkonium Chloride and Benzelthonium Chloride has wrongly influenced some (including drug and chemical manufacturers) to assert that Citricidal has been spiked with these poisons. (They are both powerful industrial disinfectants, and are even found in some consumer goods in the U.S.) But once again, independent lab tests, and a 30-year track record of safe use as a human therapeutic speak loudly against such slander. More on quaternary compounds here. Citricidal is the trademark of our professional-strength product, available in both liquid and powder form. Nutribiotic is the trademark of our growing consumer line of products containing Citricidal in measured quantities, along with other, thoroughly tested ingredients, insuring the highest quality, potency, and safety.

With so many products on the market making so many claims, a measure of skepticism about GSE is understandable. But consider that Citricidal and NutriBiotic extracts have been used in their present form for some 10 years, all over the world. Virtually all of our bulk-order customers have had the product tested in the laboratory before buying. Even without the advantages afforded the pharmaceutical establishment, Citricidal and NutriBiotic have gained wide acceptance. Production for 1998 exceeded 1.5 million pounds. As more uses are discovered, and more testing is done to confirm its safety and efficacy, it is certain that many more questions about agricultural, environmental, and human health will be answered with Citricidal Grapefruit Seed Extract. Lab reports on grapefruit seed extract, technical data, common uses, feedback from doctors and consumers, FAQs, dosages, discussions, newsletter, and lots more. How specific common problems have been treated: candidiasis, parasites, sinusitis, athletes foot, colds & flu, ulcers, pets and livestock, crops and foodstuffs, applications as germicide, preservative, and preventive.