Posted in Digestion and Food Intolerances
by Super Admin2018-10-05

Your digestive system is responsible for processing food. Breaking it down into usable substances. Then introducing them into your bloodstream. Here we’ll talk about:

Digestion begins in your mouth. Teeth and tongue begin to breakdown food. Aided by saliva secreted by the salivary glands.

The chewed food and saliva is swallowed. Then carried with peristaltic (contractile) waves down the esophagus to your stomach.

To further break down food, your stomach combines it with hydrochloric acid. When the food is thoroughly digested, the remaining fluid is called chyme. It’s passed through the pylorus sphincter, to the small and large intestines.

Inside the intestine, nutrients are absorbed from chyme into the bloodstream. This leaves unusable residue in the colon and rectum where it’s stored for excretion. The colon is where most of the water is absorbed into your bloodstream.

At this point, the waste is solid and called feces. It’s compacted and passed through your anus.

Throughout your digestive tract, the pancreas, spleen, liver and gallbladder secrete enzymes that help the whole process.

Responsible for articulation in speech, tasting, chewing and swallowing food. The mouth cavity  is formed by the palatine bones and the palatine processes of the maxilla on top and by the mandible on the bottom.

At the opening of the mouth cavity are the lips. Muscular structures which are covered with thin, membranous skin. 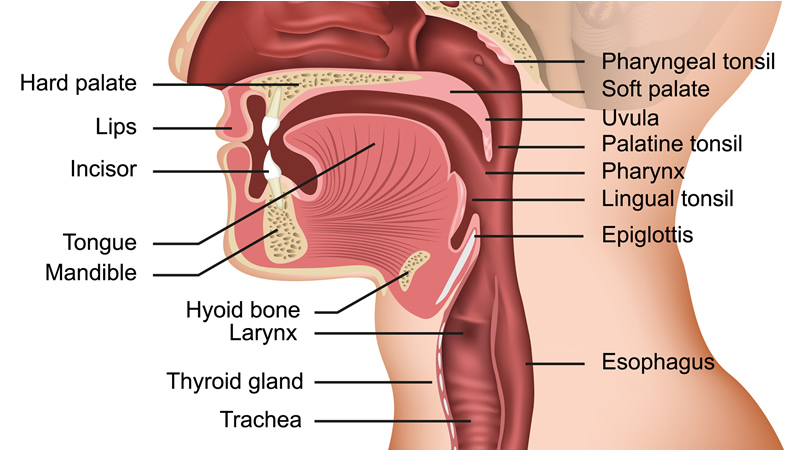 When food is brought into the mouth, the lips should close, and salivary glands produce saliva to lubricate mouth and moisten food. The inner surface of the lips, tongue and cheeks manipulate the food so that it’s brought between the teeth as the teeth clamp down on the food. In a combined action of these motions, with a semicircular, grinding motion of the teeth, the food is chewed into a paste with the saliva.

Enzymes in the saliva begin to break down food. The tongue moves a portion of this food paste to the back of the mouth cavity by pressing it up and back along the hard palate. The soft palate raises to seal off the nasal cavity. The ball of food paste (bolus) is passed into the pharynx. The epiglottis lowers to cover the airway to keep food from entering the larynx. From the pharynx, wave-like contractions (peristalsis) push the bolus down into and through the esophagus and into the stomach, where it is further digested.

The parotid glands are two salivary glands that sit just in front of the ears on each side of the face. They produce saliva to moisten food to assist in swallowing. Aid in chewing and digesting food. There are many salivary glands in the lips, cheeks, mouth and throat. Keeps the mouth lubricated for articulation and speech.

Saliva also performs a cleaning function, serving to keep exfoliated epithelial cells, most bacteria, and food particles away from the teeth.

Saliva is a clear, alkaline, semi-viscous liquid which helps digest food. The salivary glands include the large parotid gland and the smaller submaxillary and sublingual glands. When food is smelled, tasted, or thought of, the salivary glands begin secretion to prepare the mouth for food.

Enzymes in saliva begin the digestive breakdown of the food even before it reaches the stomach. A number of toxins (including lead, mercury, and other heavy metals) are secreted in the saliva and the body’s water balance regulation is also assisted by salivary secretion.

Located in the upper portion of the airway and the digestive tract. It connects with openings into four general areas: the mouth cavity (at the back of the tongue), the nasal cavity, the larynx (which leads to the trachea), and the esophagus.

In swallowing, the nasal part of the pharynx, the larynx, and the mouth cavity cooperate to shut off the airway so that the swallowed food isn’t taken into the trachea.

The tongue is usually flat and moderately extensible. It consists of a network of bundles of striated muscle fibers, fibrous tissue, fat and lymphoid masses, mucus-producing glands, and a covering of mucous membrane.

It is derived mostly from an outgrowth (tuberculum) in the floor of the pharynx. The tuberculum grows forward and is joined by other tissues from the region, forming this complex muscular organ of many uses.

It is an extremely mobile muscle that enables you to taste food, move it around as you chew, push it back into your pharynx (throat) when swallowing. Invaluable aid in speech.

This long, flexible tube leads from the pharynx in the upper throat to the stomach. The average esophagus is about ten inches long, and its walls are made of muscle fibers which contract in waves (peristalsis) to push the bolus of chewed food and saliva down to the stomach.

The common ailment of heartburn occurs when stomach acid washes back up into the esophagus. Since the esophagus has no protective mucosal layer, the acid causes pain which generates just behind the sternum (breastbone) and seems to come from the heart, hence the term “heartburn” is often used.

One primary organ of the digestive system. Located in the middle of the abdominal cavity. Extends from the lower end of the esophagus to the duodenum. A curved sac, the stomach has a lesser curvature along the top and a greater curvature along the bottom. The bolus of chewed food paste enters the stomach from the esophagus, propelled by peristalsis.

Cardiac gastric glands are located near the entrance to the stomach and lubricate the food as it comes in. The stomach secretes hydrochloric acid and the enzymes pepsin, rennin, and lipase which help digest carbohydrates, proteins and fats.

The stomach is lined with a durable mucous lining to protect it from gastric juices so that it doesn’t digest itself. Occasionally, a portion of the lining wears thin, and digestive juices aggravate it. This is an ulcer. A frequent occurrence which can affect the stomach, lower esophagus and/or duodenum. The lower end of the stomach is guarded by the pylorus valve (pylorus means gatekeeper). A sphincter muscle that allows digested food into the duodenum. After adequately processed by digestive juices.

The average stomach can hold about a quart (about a liter), but can stretch to hold much more. When empty (or nearly), the stomach contracts to form folds, or rugae, in its mucous lining. Though it was once thought that the contractions of the stomach in the absence of food was what caused the sensation of hunger, it is now known that the primary impulse of hunger is due to low glucose levels in the bloodstream. However, the contraction of the stomach can often be felt, and this and the “grumbling” heard as food is passed through the lower digestive tract also serve to remind one of the sensations of hunger.

Largest of the body’s glands. Responsible for several important functions including: 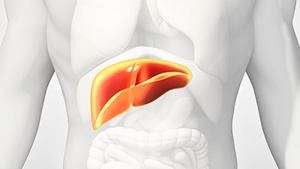 Weighing about three pounds, the red-brown organ features a high degree of vascularity which is responsible for its dark color. Located mostly on the right side of the abdominal cavity, just above the duodenum.

A blue-green organ, about three inches long, located on the underside of the liver. It concentrates and stores bile, produced in dilute form by the liver. Secretes bile through the cystic ducts into the duodenum. Here it can help digestion.

Bile is composed of cholesterol, bile salts and bile pigment. The gallbladder is not critical to survival. It may be removed without severe adverse effects. The crystallization of the bile salts in the gallbladder gives rise to gallstones, which can require surgical correction. 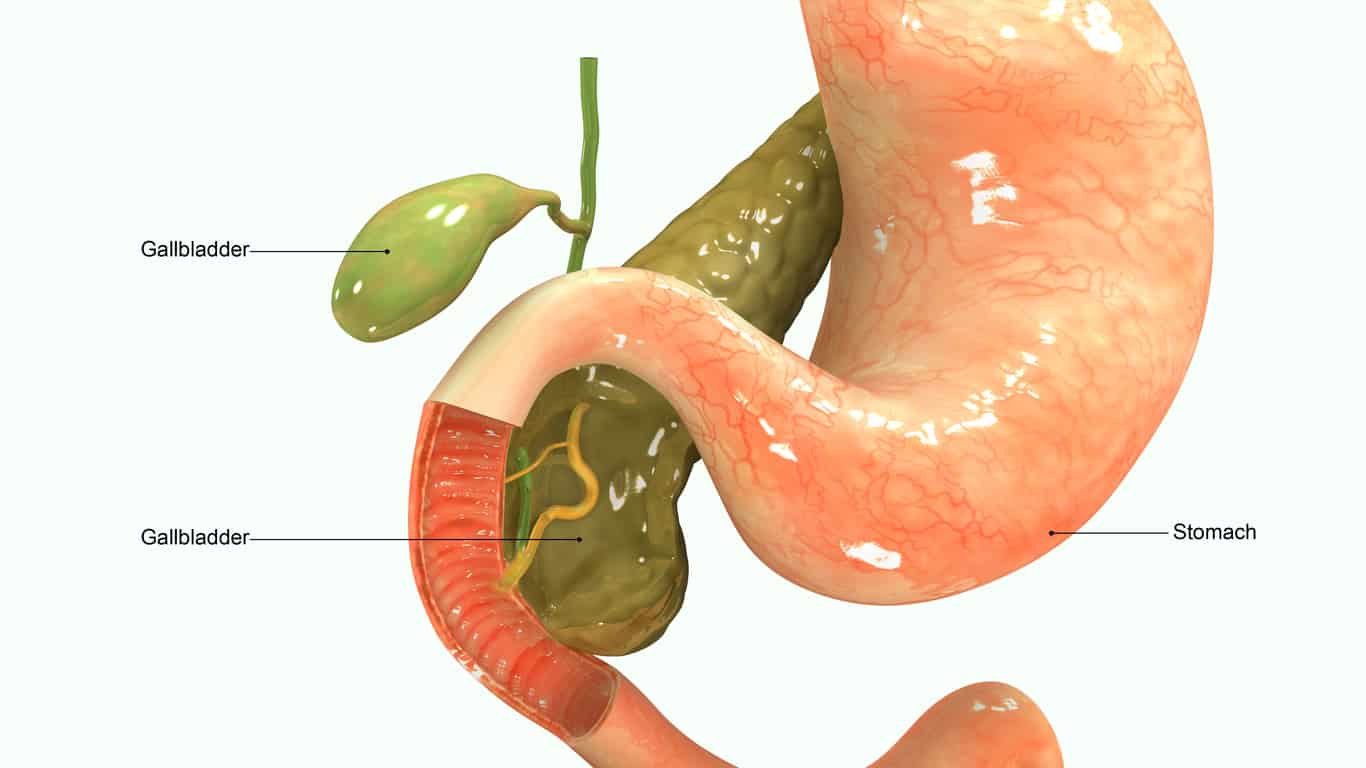 Responsible for completing digestion and absorbing usable food products into the lymphatic system and bloodstream.

The small intestine extends from the duodenum, where it accepts chyme (predigested food), to the ileocecal orifice, where it passes semifluid food byproducts to the large intestine. The food is passed through the intestinal tract by peristalsis in the intestinal wall. The food is further digested by bile and other digestive juices deposited into the duodenum from the gallbladder, pancreas and liver.

The digesting food passes by millions of villi (projections) on the inner intestinal wall. The villi absorb proteins and carbohydrates into their capillaries and lymphatic nodules, which absorb fats. The villi pass the proteins and carbohydrates to the liver for metabolic processing. Lymphatic nodules pass the fats through the lymphatic system into the bloodstream. The small intestine is anchored to the spinal column by a vascular membrane called the mesentery.

A small, worm-like attachment at the cecum, in the lower right portion of the abdomen. Close to where the small intestine attaches to the large intestine.

Evidence has shown that the appendix may have taken part in the digestion of durable matter, such as insect chitin and tree bark.

Mainstream medicine has assumed the appendix is unnecessary. We’ve been told that the appendix was left over from evolution. It should be removed as soon as it’s troublesome. just because they didn’t yet understand it’s function, they assumed there was none.

Considerable research has shown the appendix to be a complex and highly specialized organ. Scientists believe it has important functions in the following areas: embryological, physiological, microbiological (bacteriological), biochemical and immunological.

For instance, consider the following physiological function: The goblet cells which line the appendix and the adjacent cecum and colon secrete a special mucus which can be regarded as an antibacterial paint controlling the organisms which develop in the bowel. Without this, the body cannot truly utilize its food. Now, most doctors say that the appendix should not be removed. Inflammation of the appendix is called appendicitis, and its removal is one of the most commonly performed surgical procedures.

Continues to process the material and passes it along to be excreted. Any unabsorbed food materials are stored in the large intestine until the body can partially reabsorb water from it. Then it will continue to the anus for elimination. Over-absorption of water from waste material may lead to hard, relatively dry feces which can become impacted, making elimination difficult. This condition is known as constipation.