Why drink regular tea when you can experience fitness and wellness of a total body cleanse with the Dr. Miller’s Tea? Healthy colon supports a healthy happy life.

Dr. Miller’s Tea has been documented to positively affect even the most severe cases of chronic disease. Any disease rooted in your digestive tract (can you think of any that are not?) can be reduced and possibly eliminated by using Dr. Miller’s Tea.

It works immediately and effectively to remove chemicals, flukes, parasites, viruses, molds and pathogenic bacteria from your body. It even tackles the toughest hard drugs, takes them out of circulation and eliminates them (cocaine, meth, nicotine, alcohol, prescribed drugs, coffee, sugar, aspartame, and over-the-counter drugs). After some time with the tea, drug testing (including the hair follicle test) will show no drugs.

Continued and consistent drinking of Dr. Miller’s Holy Tea works to steadily support your body’s cells, cleaning out the junk, and rebuilding your health.

Ongoing use of the Tea will keep you protected from infections, chemicals,  metals, or chemical additives in your food.

Give your body a fighting chance to become vital and healthy. Only a clean digestive system promotes the health of the rest of your cells.

The specially selected ingredients in Holy Tea are high-quality, pesticide-free, safe, natural and edible – all grown in the southern United States: 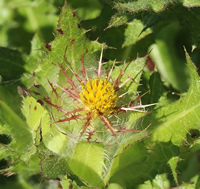 Blessed Thistle is so named because of the ancient belief that it possesses supernatural qualities.

Blessed Thistle has been used for smallpox, malaria and fevers. Though it was used traditionally to stimulate breast milk flow, it should not be confused with a different milk-stimulating plant, Silybum marianum, which is called Milk Thistle, or Holy Thistle.

Blessed Thistle has fuzzy leaves and stems with yellow flowers, grows up to two feet tall and is found in meadows and along roadsides. From May to June the plant bears pale yellow flowers. Among natural-health enthusiasts, the plant is commonly used to support the female reproductive system.

It was cultivated in monastery gardens as a cure for smallpox and named in honor of St. Benedict, the founder of a holy order of monks. It is still used as a flavoring in their Benedictine liqueur. 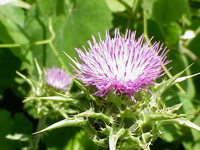 Also known as Milk Thistle, the source of popular silymarin.

Holy Thistle is believed to have great power in purifying and circulating blood, so much that drinking a cup of Holy Thistle tea twice a day has eliminated chronic headaches.

Holy thistle has been used medicinally for over 2000 years. More recently it’s been used by HIV-positive patients to protect the liver from diseases such as hepatitis, and damage from drugs taken for HIV or AIDS.

A flavonoid in the fruit called Silymarin (with its most active beneficial component called Silibinin or Silybin) is a powerful antioxidant, and may also protect liver cells by blocking the entrance of harmful toxins, and removing them. Silymarin has also been shown to regenerate injured liver cells. It stimulates liver and gallbladder activity.

The leaves and stems are eaten as a salad green in Europe. 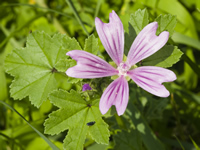 Malva has been cultivated in China for over 2,500 years and is now grown and eaten in salads (mild, pleasant flavor) in Europe.

Caution:
Beware of Chinese Mallow Teas that contains Senna ( known as Cassia angustifolia, or Cassia acutifolia, or Cassia Senna, or Indian Senna, or Egyptian Senna). Cassia is a strong and harsh laxative that works by irritating the intestines. It should only be taken occasionally and for no longer than 7 days because it can create bowel dependency, stomach cramps and headaches.
Dr. Miller’s Holy Tea does NOT contain Senna. 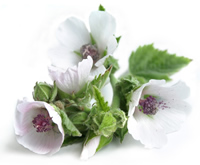 Marsh Mallow is high in mucilage with expectorant and demulcent properties, reduces mucous membrane inflammation for relief of breathing difficulties, congested coughs, irritated throats and the whole digestive system. Mucilage is a natural gummy substance that does not dissolve in water. It swells up and becomes slick when exposed to fluids, and the resulting slippery material coats the linings of the mouth, throat, and stomach to relieve irritation and control coughing associated with respiratory conditions such as smoker’s cough. The polysaccharides form a protective film over inflamed and irritated mucosal tissue.

Topical and External Use

Marsh Mallow has an inhibitory effect in hyaluronidase, which is an enzymatic action in which the hyaluronic acid and other muco-polysaccharides in the connective tissue are degraded. An inhibition and reduction in hyaluronidase leads to better moisture levels in the skin as well as boosting the dermal structure and improving wound healing processes, while at the same time reducing skin aging and diminishing inflammation. 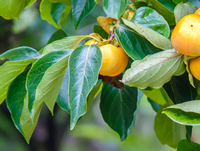 The tannins and flavonoids contained in the persimmon leaves have been shown to have anti-hypertensive (regulate blood pressure), anti-carcinogenic, and anti-mutagenic properties (reduce the occurrence of abnormal cells).

Persimmon originated in China and has been grown for over 1000 years in Japan (leading producer today). The Kaki persimmon fruit is widely eaten in China, Korea, Vietnam and Japan.