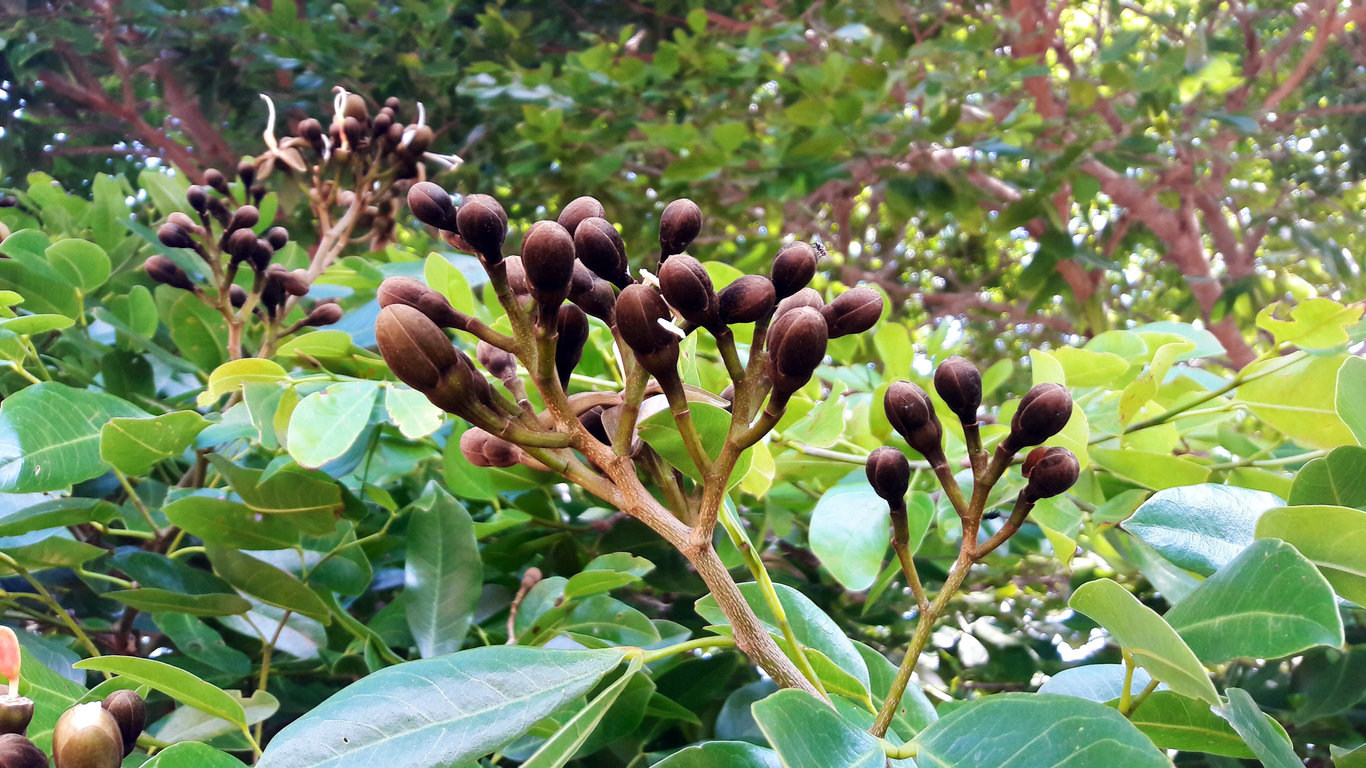 If you were standing in the rainforest, looking straight up, Jatoba is one of those huge canopy trees towering 90 feet overhead. Its small red flowers produce an edible, odd, brown fruit pod. Its sap is gathered for incense, and a tea, made from its bark, is a favorite health and energy tonic among Amazonian lumberjacks. According to Brazilian doctors, whoever drinks Jatoba becomes “strong and vigorous, always ready to work – and staying productive.”

While Jatoba is also used for prostatitis, mouth ulcers and for bladder and yeast infections, it is not officially regarded as a direct aphrodisiac. However, I suppose a case could be made that a lethargic couple suffering from prostatitis and a yeast infection should possibly address these issues before expecting to move on to the more direct Aphrodisias. Perhaps you could say that Jatoba is an ideal preaphrodisia for either achieving or maintaining readiness.

One of the ways Jatoba seems to address energy is through supporting the liver, which is the heart of enzyme production and enzyme reconfiguration in your body Another avenue of energy increase may be a result of Jatoba’s effect of decreasing the yeast and fungus population which eats our food, and our cells, and then poisons us in return.

Like many of the bioflavonoid-rich Amazonia herbs, Jatoba helps with both asthma and arthritis. Abundant bioflavonoids also help keep bruising from injuries, accidents and surgeries to a minimum. In South America, Jatoba is typically mentioned for laryngitis, bursitis, hepatitis, excessive menstrual bleeding, dysentery, and athlete’s foot.

Jatob is a huge canopy tree, growing to 30 m in height, and is indigenous to the Amazon rainforest and parts of tropical Central America. It produces bright green leaves in matched pairs, white, fragrant flowers that are pollinated by bats, and an oblong, brown, pod-like fruit with large seeds inside. The fruit is considered edible although hardly tasty; one of its common names, “stinking toe,” is used to describe the smell and taste of the fruit! In the Peruvian Amazon the tree is called azucar huayo and, in Brazil, jatoba. The Hymenaea genus comprises two dozen species of tall trees distributed in tropical parts of South America, Mexico, and Cuba.

Several species of Hymenaea, including jatoba, produce usable copal resins. At the base of the jatoba tree an orange, sticky, resinous gum collects, usually underground (however, the bark also produces smaller amounts of resin when wounded). The resin of Hymenaea trees converts to amber through a remarkable chemical process requiring millions of years. During this process, volatile plant chemicals leach out of the resin and other non-volatile chemicals bond together. This forms a hard polymer that is resistant to natural decay processes and the ravages of time. As portrayed in the Jurassic Park movies, amber of million-year-old Hymenaea trees have provided scientists with many clues to its prehistoric presence on earth as well as to the insects and other plants encased in it.

In the Amazon, jatoba’s aromatic copal resin is dug up from the base of the tree and burned as incense, used in the manufacture of varnishes, used as a glaze for pottery, and is employed medicinally. Indians in the Amazon have long used the resin in magic rituals, love potions and in wedding ceremonies. Although the name Hymenaea is derived from Hymen, the Greek God of marriage, it refers to the green leaflets that always occur in matching pairs, rather than the Indian’s use of it in marriage ceremonies. Jatob’s bark and leaves also have an ancient history of use with the indigenous tribes of the rainforest. The bark of the tree is macerated by the Karaja Indians in Peru and Creole people in Guyana to treat diarrhea. In Ka’apor ethnobotany, jatoba bark is taken orally to stop excessive menstrual discharge, applied to wounded or sore eyes, and used to expel intestinal worms and parasites. The bark is used in the Peruvian Amazon for cystitis, hepatitis, prostatitis, and coughs. In the Brazilian Amazon, the resin is used for coughs and bronchitis, and a bark tea is used for stomach problems as well as foot and nail fungus.

With its long history of indigenous use, it would follow that jatoba has a long history of use in herbal medicine systems throughout South America. It was first recorded in Brazilian herbal medicine in 1930. The bark was described by Dr. J. Monteiro Silva who recommended it for diarrhea, dysentery, general fatigue, intestinal gas, dyspepsia, hematuria, bladder problems, and hemoptysis (coughing blood from the lungs). The resin was recommended for all types of upper respiratory and cardiopulmonary problems. In the mid-1960s an alcohol bark extract called Vinho de Jatob was widely sold throughout Brazil as a tonic and fortificant, for energy, and for numerous other disorders.

In traditional medicine in Panama, the fruit is used to treat mouth ulcers and the leaves and wood are used for diabetes. In the United States, jatoba is used as a natural energy tonic, for such respiratory ailments as asthma, laryngitis, and bronchitis, as a douche for yeast infections and it is taken internally as a decongestant and for systemic candida in the stomach and intestines. It is also used in the treatment of hemorrhages, bursitis, bladder infections, arthritis, prostatitis, yeast and fungal infections, cystitis, and is applied topically for skin and nail fungus. At present, none of the research has indicated that jatoba has any toxicity. One study highlighted the mild allergic effect that jatoba resin may have when used externally.

In addition to its antifungal properties, jatoba also has been documented to have anti-yeast activity against a wide range of organisms including Candida. Other clinical studies have been performed on jatoba since the early 1970s which have shown that it has antimicrobial, molluscicidal (kills/controls snails & slugs), and antibacterial activities, including in vitro actions against such organisms as E. coli, Psuedomonas, Staphylococcus and Bacillus. In addition, a water extract of jatob leaves has demonstrated significant hypoglycemic activity, producing a significant reduction in blood sugar levels (which validates another traditional use).

Practitioners have long reported that jatoba bark has shown dramatic results with acute and chronic cystitis and prostatitis. Many practitioners today are discovering that these chronic conditions oftentimes can be fungal in nature rather than bacterial. The widespread use of antibiotics to treat these conditions can actually kill off friendly bacteria which live off fungi – and increase the chances of a fungal problem or encourage fungal growth – even to the point of making the condition chronic. When these types of chronic prostatitis and cystitis cases react so quickly and dramatically to jatoba supplements, is it probably from jatoba’s antifungal and anti-yeast properties at work, not its antibacterial properties.

Natural health practitioners in the United States are learning of jatoba’s many uses and employing it as a natural remedy for prostatitis and cystitis, as a healthful tonic for added energy (without any caffeine or harmful stimulants), and for many fungal and yeast problems such as candida, athlete’s foot, yeast infections and stubborn nail fungus. It is a wonderful, helpful natural remedy from an important and ancient rainforest resource.

The above text has been quoted from the book, Herbal Secrets of the Rainforest