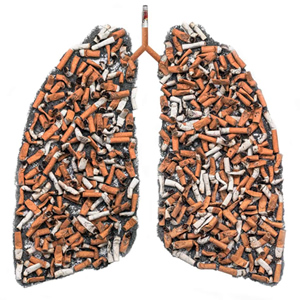 In the year 2005 there were 175,000 new cases of lung cancer in the United States. The months of January and February of 2006 have already yielded 172,000 new cases of lung cancer in our nation. What has lead to this shocking new development? Second hand smoke exposure and cigarette smoking obviously can not explain this dramatic rise in lung cancer. Following exposure to radioactive iodine particulate debris in the air from shells and bombs, between 2 to 5 years of time is needed to lead to the appearance of malignancies. Our bombing of Afghanistan began in October 2001 (four and a half years ago) and the new bombing in Iraq began in March 2003 (exactly three years ago). Aerial bombs are more effective than artillery shells in increasing airborne radioiodine because they release more dust into the atmosphere.

The radioactive iodine increment from these bombings was registered in the UK in the Aldermaston Report[1] released on Feb. 19, 2006. The US government has not released any information about the levels of radioactivity being observed in the US and the controlled media in Europe and the US has said nothing about the 4 genocidal nuclear wars the United States and it’s British ally have foisted off on the populace of the world. (Bosnia, Iraq twice and Afghanistan). The DU wars surely reflect the population lowering program for the world being implemented by the New World Order elitists (Tilateral Commission., Bilderbergers, Club of Rome, 33 rd degree Masons, Illuminati, Council of Foreign Relations.) Breathing radioactive particlulate matter has long been known to cause lung cancer.

Miners working in uranium mines and other types of mining where radioactivity is an occupational hazard have a higher incidence of lung cancer. This danger from airborne radioactive iodine is greater than that found from cigarette smoking. The radioactive iodine particles go directly to DNA which is “trashed”. There are no ways the human body can rid itself of the radioactive particles so the health damage is permanent. This results in severe health problems particularly malignancies which have no effective therapies. Physicians in Bosnia are seeing patients present for care with three simultaneous malignancies something never previously reported in medicine. Children in Iraq are dying in epidemic numbers from malignancies. In most nations cancer in children is uncommon.

This makes depleted uranium shells and bombs an ideal vehicle to diminish the world population. The absence of media exposure critical of this genocidal program makes DU warfare a low risk program for lowering world population. One of the attractive features of using radioactive uranium for biologic warfare and population lowering is that there are no known effective ways to heal an individual who develops a malignancy after radioiodine iodine exposure. A frightening aspect of depleted uranium warfare is that there is no way to protect oneself from this hazard. Clothing and gas masks are easily penetrated. The key persons running the New World Order are brilliant planners. They would not want themselves to die from lung cancer along with the rest of humanity.

My guess is they have discovered methods to protect themselves from developing lung cancer. Certainly one has to be impressed with how effectively David Rockefeller, Zbigniew Brzezinski and Henry Kissinger appear to have managed to avoid the infirmities of aging at least to outward appearances. I do not know if persons living in the Southern hemisphere are also being exposed to radioiodine fallout. Recently Christopher Reeves wife, Dana, died of lung cancer at age 44. She was a healthy non smoker so her death appeared puzzling. The DU fallout may provide a rational explanation. Because prevailing winds have carried radioiodine dust to Europe and probably the US it appears that at least half the persons on planet earth are currently breathing radioiodine.

The topic of depleted uranium bombs and shells will not be discussed in the media because the world’s media is controlled by the New World Order elitists. World wide public outrage could ruin their plans to rapidly lower the world’s population by 90 % if this issue was publicly discussed. When a biologic warfare agent like the borrelia burgdorferi spirochete (Lyme Disease) turns out to spread person to person it becomes a gigantic success. We all must breath to stay alive. With at least half the persons on earth now breathing radioactive iodine the bio-warfare scientists appear to have their second big winner. Expect lung cancer deaths to rapidly increase worldwide.