Are you prepared to line up with the rest of the unthinking crowds and have poisons injected into you or your children, only to find out later that it was just a big mistake?

Runaway healthcare costs became an issue in the US election. Is that a surprise? Seniors surpassed wayward teens as Americas biggest drug lawbreakers, crossing over to Canada to get cheaper supplies. In 2004, Merck withdrew its arthritis drug Vioxx, which spawned lawsuits. Lurking beneath the headlines was Wall Streets worry that Big Pharmas pipeline of new drugs looked dry. The S&P 500 Pharmaceutical index fell 9.5 per cent for the year.

This year, as if they learned nothing in the intervening years, GlaxoSmithKline was assessed a 3 billion dollar fine after they admitted to the biggest health care fraud in history the temptation is too big, and they just cannot help themselves. I suspect that the fine is not going to amount to much more than a minor setback. 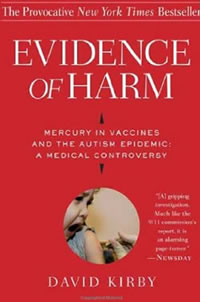 One controversy looks likely to fester. Big Pharma would love to put it to rest, but the April publication of a well-researched book is likely to push it to the fore. The debate centers on whether the use of the toxin mercury as a preservative in vaccines for infants has played a role in the surge in autism cases.

No answer proving or disproving a link has emerged, but in the book Evidence of Harm: Mercury in Vaccines and the Autism Epidemic author David Kirby sympathizes with the drug industry’s opponents: the parents of children with autism who cannot otherwise account for it. There is an effective solution for the heavy metal toxicity: Zeolite.

I keep mentioning it. It is effective and affordable. If you have already been harmed by our industrial pollution or by medical misadventures, please investigate this: Zeolite is safe (declared GRAS or Generally Recognized As Safe by the Federal Food, Drug, and Cosmetic Act) It’s affordable, and it is really effective. I am using it myself to reverse the damage done to me with mercury dental filling poison that I thought was going to cripple me. Click here to read my whole story.