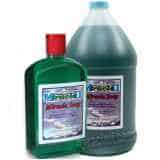 If you really want to recover from candida, the best thing you could do is step back and focus on your total health, not the candida. It is just the tip of the iceberg, and just an indication that you have many lifestyle, diet, and health issues to consider.

This is just one guy’s story, and I don’t mean to imply that what I am going to say, applies to everyone, or maybe even anyone. Also, I think there are many roads that lead to Rome, that is, copying what I have done may or may not be best for any particular person, just things to consider.

I was born with horrible skin allergies and rashes, for which I was given steroids. I continued to have skin problems throughout life. I developed bad allergies early in life as well. I was lethargic, shy, unathletic and withdrawn. I was constantly sick and had occasional headaches. By college and law school I had full fledged sinusitis. I had a huge gut and digestive problems, could not focus, always had bowel problems. After law school I was functioning on steroids, allergy meds, Advil and lots of coffee, but I was getting worse, and fast. I was not even 30 years old. It started to ruin my career, and then I knew I had to do something.

I started going to sinus specialists because that was my worst symptom, and was also causing the headaches. I figured that was my real problem. After 3 or 4 specialists who couldn’t help, I was getting desperate. I read sinus survival, which mentions candida as a cause, but I was in denial as I did not want to consider that I was dealing with a very chronic and hard to deal with problem. So I ignored it for awhile. Since I had lived in china and liked Chinese medicine, I tried a local Chinese doctor for acupuncture. It felt great and brought temporary relief, and made me question why acupuncture could help, but my doctors couldn’t. You know the feeling. She also gave me something called isotonix opc-3, grape seed extract, which totally relieved the symptoms as long as I kept taking it. I was happy with this for awhile, because it was relief, and that was enough.

Since that supplement worked, I started trying others, everything, you name it. Antifungals, vitamins, enzymes probiotics, juicing, cleanses you buy in a store… I was spending a lot of money, and while I felt better, I was not satisfied with being a supplement juggler. I tried the candida diet. When I was told I could expect to live the rest of my life that way, it really depressed me, for a long time. People on the list I followed at the time basically told me I just had to face it, but I refused, and started spending hours a day reading anything I could. I went down a lot of promising roads that brought a little help, but never really cured me or gave me a real understanding of how and why I got sick, and how I could get healthy. I really hated the candida diet. I think that alone drove me on to find an answer.

I had seen liver flushing discussed by people on that other list, and found the CureZone that way. It took months before I allowed myself to consider that my liver might be a problem, that it was more than just a little GI tract/sinus thing. It seemed like such a leap, with no real science backing it. But I wasn’t making real progress, so I was desperate to try anything. I did the Hulda Clark flush, and I got tons of stones, hundreds of large stones. And I felt relief that I had not in years. I knew the worm had begun to turn (though the relief was less than a week, then gone).

I did three more, all the Clark cleanse, no colon cleansing. After the fourth, something wasn’t right. I got a stone stuck in the colon, and it made me sick. And the juicing was tearing me up, even though I didn’t know it. Someone told me to ask Dr. Andreas Moritz about it, and I did. He told me to stop juicing and that I had a stuck stone. Both proved correct, and I then knew that the guy knew his stuff. Though honestly, at first, I thought he was a bit far out. I’m a lawyer, not an artist or some touchy feeling type. It took some time to open up to what he said on his list every day. But I took a chance, spent $7 bucks on his book, “key to health” and it turned out to be the best $7 I ever spent.

On his advice I got two professional colonics, which got out tons of crap. It really helped. I bought a home colema system to use before and after flushes, no more stuck stones for me. I started slowly implementing the advice found in “key to health” and before I knew it, I was well on my way.

Some of these things I learned from Andreas, some from other people. I did the following very general things.

Got all chemicals out of my life: soap, dryer sheets, deodorant, creams, toothpaste, everything I could think of. I exercised, ate a whole foods diet, worked on my happiness, and generally cared about myself. Some of the specifics are as follows:

I think that covers most of the major stuff, although I know I have forgotten things. The eating guidelines are so detailed that I cannot possibly go into them here, just have to check out the book for that. It sounds like a lot, but I don’t do it all every day, and I didn’t start everything all at once. I am a married lawyer, but found a way to make time for this. If I can, we all can make time for ourselves. Besides, now I could not live without these things they have become such a part of me.

Of course not all of this may be necessary. What is more important is how you view your health and how you view disease. At first I too saw candida as some invader that didn’t belong. Now I have changed my opinion entirely. I see it as part of the body’s back up digestive system. I think (and learned this from others) that the candida is protecting you from toxicity resulting from your inability to digest foods. As such killing candida is counterproductive, and could be harmful. I won’t go into much here, because its controversial, but the curious can search in the “Ask Andreas” archives about possible dangers of antifungals, even naturals. If you take them, you should hear every opinion about them.

Cleanse the body’s vital organs and focus its digestive powers, and there will be no need for candida. Its just a symptom, not a disease. The key in my mind is to work with the body to address whatever underlying problem is interfering with your health. American lifestyle obviously does not help. Once a liver is clogged up, it makes it very very hard to get healthy again without unclogging it. This can take time, and many flushes. No its not easy, but the rewards can be great.

I really wish there was an easy way out, but I don’t think there is. But this doesn’t have to be work. I love my life now, and the things I am doing to get healthy. I wouldn’t go back for anything. And yes, I do cheat. I have a few beers here and there, eat sugar and pizza. But all in all, I stay on the healthy path. I apologize that this seems so disorganized. But in the end it probably doesn’t matter. Each person will have to make changes that suit their own life, they just need to think hard on what those changes could be, and keep an open mind. The candida dogma is out there, some of its helpful, but some of it is just dogma. Something may bring temporary relief, but long term harm. We are all guinea pigs in this. So when I consider something new, I consider whether its something that assists the body to heal itself, or is it a crutch or worse.

Each of us is the cure for our own problems if we want it to be. Giving up on anyone curing me was probably the best thing that could have happened to me.