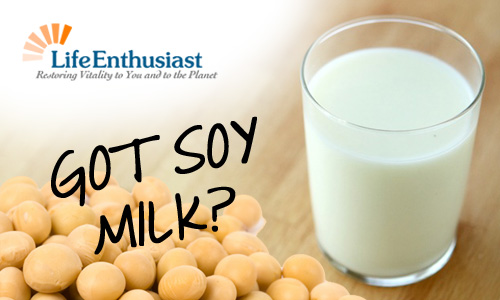 For years and years, food manufacturers led us to believe that soy is a health food. Soy milk, soy cheese, edamame, even meat replacements made of soy tofu, and other meatless substances became an ideal option especially for Vegetarians and Vegans, but in fact there is nothing healthy about non-fermented soy and soy products. Soy can cause serious health problems and its used in almost every processed food because it is cheap to grow and process. Soy is well marketed and marked as healthy food, and it is almost everywhere nowadays, just like corn.

The main reason we should avoid soy is the fact that most of it is genetically modified in a way that makes it damaging to the gut of any creature that eats it. When GMO soy is grown next to a field of non-GMO soy, the cross-pollination (natures way of helping crops to grow, healthy and strong) unfortunately contaminates pure soy crops. To add insult to injury, the farmer is not allowed to keep the contaminated seed for planting. Monsanto, the largest GMO crop producer, has very strong political power and a law made in their favor says that every plant that has been cross-pollinated by their patented seed instantly becomes their possession. Farmers can no longer harvest and sell their own crops, because it belongs to Monsanto since it was pollinated by their plants. Crazy, right? Small farmers are going out of business and big corporations thrive, making money, and making people sick. And all that is protected by law. I guess Mark Twain was right when in 1905 he wrote: We have the best government money can buy!

Soy should be treated the same as grains and legumes. It contains lectins, a kind of protein that is present in animals (including humans) and plants. Plant lectins, however, work as protective and helpful compounds in plants, but not in animals, and definitely not in human bodies. Lectins mess up your leptin sensitivity and leptin is responsible for your hunger signals. When your leptin sensitivity is somehow disrupted, your brain thinks its hungry all the time, making you eat more food without actually getting satiated. This also leads to insulin resistance, which can subsequently lead to diabetes. Soy is also very high in phytates, compounds that bind to minerals and make them biologically unavailable to us, meaning that even though we ingest these minerals, we are not able to use or store them. That’s bad news for people who are zinc, iron, or magnesium deficient. Another thing that soy is rich in is goitrogens. These substances suppress the function of the thyroid gland, leading to hypothyroidism and a weakened immune system. Other foods contain goitrogens too, cruciferous vegetables including cauliflower, broccoli, and brussels sprouts for example, but in these vegetables the compound is eliminated during cooking, which isn’t the case with soy.

Last but not least, lets talk about isoflavones. Isoflavones are plant estrogens. Yes, the female hormones, estrogens. Eating these might raise the estrogen level in the body while lowering testosterone levels. That is bad news, and not just for men who might experience lower libido, female pattern fat gain, and even gynecomastia (known more commonly as man boobs). In women, too much estrogen can create fertility issues, and can raise incidence of breast cancer. Consuming too much soy may be equal to taking multiple birth control pills a day. Sometimes the fertility issues are irreversible. Children, specifically boys, who consume soy might have difficulties with development of testicles and further issues when reaching puberty. An old study showed that soy and soy based meals were in the past served to monks to lower their libido, so they forgot about sexual desires and were much more likely to be celibate. Soy is everything but healthy. It is very convenient to grow, its cheap and heavily subsidized, and there is so much of it in the world. But it doesn’t make it the superfood we are told.

Soy is also a very common allergen for children. Most of them will outgrow the allergy by the age of 10, but those who are allergic must avoid soy at all costs. Always make sure to read your food labels carefully, because the statements like may contain soy or made in a facility that process soy are voluntary for the manufacturer to use. If any of the following items appear on the ingredient label, it is an indication of the soy protein being present: Bean curd, Edamame (soybeans in pods) , Hydrolyzed soy protein, Kinnoko flour, Kyodofu (freeze dried tofu) , Miso, Natto, Okara (soy pulp) , Shoyu sauce, Soy albumin, Soy concentrate, Soy fiber, Soy formula, Soy grits, Soy milk, Soy miso, Soy nuts, Soy nut butter, Soy protein, soy protein concentrate, soy protein isolate, Soy sauce, Soy sprouts, Soya, Soya flour, Soybeans, Soybean granules, Soybean curd, Soybean flour, Soy lecithin, Soybean paste, Supro, Tamari, Tempeh, Teriyaki sauce, Textured soy flour (TSF) , Textured soy protein (TSP) , Textured vegetable protein (TVP) , Tofu, Yakidofu, Yuba (bean curd) . In many cases vitamin E may also be soy derived, as well as a number of other ingredients that may appear in vitamins and supplements.

All FDA approved food items that contain soy must say so on the label, but keep in mind that not all food available in the stores is necessarily FDA approved or manufactured in the US. Different kinds of artificial flavorings, Asian foods (Japanese, Chinese, Thai, etc.), and imported baked goods, can contain soy as well. Other sneaky ingredients are for example Hydrolyzed plant protein, Hydrolyzed vegetable protein (HVP) , Lecithin, Natural flavoring, Vegetable broth, Vegetable gum, Vegetable starch. Soy is a very common ingredient in the United States, and it can be difficult to avoid all the time. Read your labels and opt for rice-based or coconut-based alternatives to soy products. If you also avoid dairy, keep in mind that soy is often used as a substitute for milk in non-dairy yogurts, beverages, or ice-creams. You don’t have to skip your favorite treat, just make sure you choose an alternative that is not sabotaging your health.

All of that said, there is still such a thing as healthy soy. It needs to be organic, non-GMO, and fermented. Fermentation removes some of the anti-nutrients and fermented soy products including Natto, Tempeh and Miso are fine in moderation. Please make sure you are eating the ones that were traditionally fermented. Just be sure that you are OK with seeds in general. Some people just have to avoid all seeds, and those with Mast Cell Activation Disorders or hormone mediated Autoimmune conditions should avoid all soy as it is likely to cause a flare in their symptoms.

There are better options in the store for you to choose than nutritionally empty, genetically modified beans full of anti-nutrients. Even if soy had one potential benefit, the negative properties of this relatively new food are not worth the risk. Soy is not healthy for humans or animals, and it is certainly not healthy for the planet. GMO soy is robbing the soil of nutrients where it is grown, and is fed to animals, who then get sick eating it. So even if you do your best in avoiding soy products, chances are you might be getting its effects within your factory-farmed meat. Mother Nature provides us the best food options we can possibly imagine, but soy is not one of them. Soy is a great commodity, just like corn. But it is not the miracle healthy super food we are made to believe. If you are looking for a healthy plant protein, please consider the barley protein concentrate made by Breakthru Bionomics from selected and sprouted barley. It comes with an unconventional guarantee: use 3 bottles in 90 days and if you are not happy with the results, you will get your money back.