Those who are familiar with the benefits of enzymatic pigments such as carotene, chlorophyll or anthocyanidins (as in bilberry) will need little convincing about the merits of another precious source. Cabbage itself is among the most highly valued health foods. Instinctually, I personally rate it at the very top. Cabbage contains unique phytonutrients especially valuable for the stomach and digestive tract. Excellent source of Vitamin C. Very good source of molybdenum, folate, manganese, Vitamin B6 (pyridoxine), potassium and biotin. 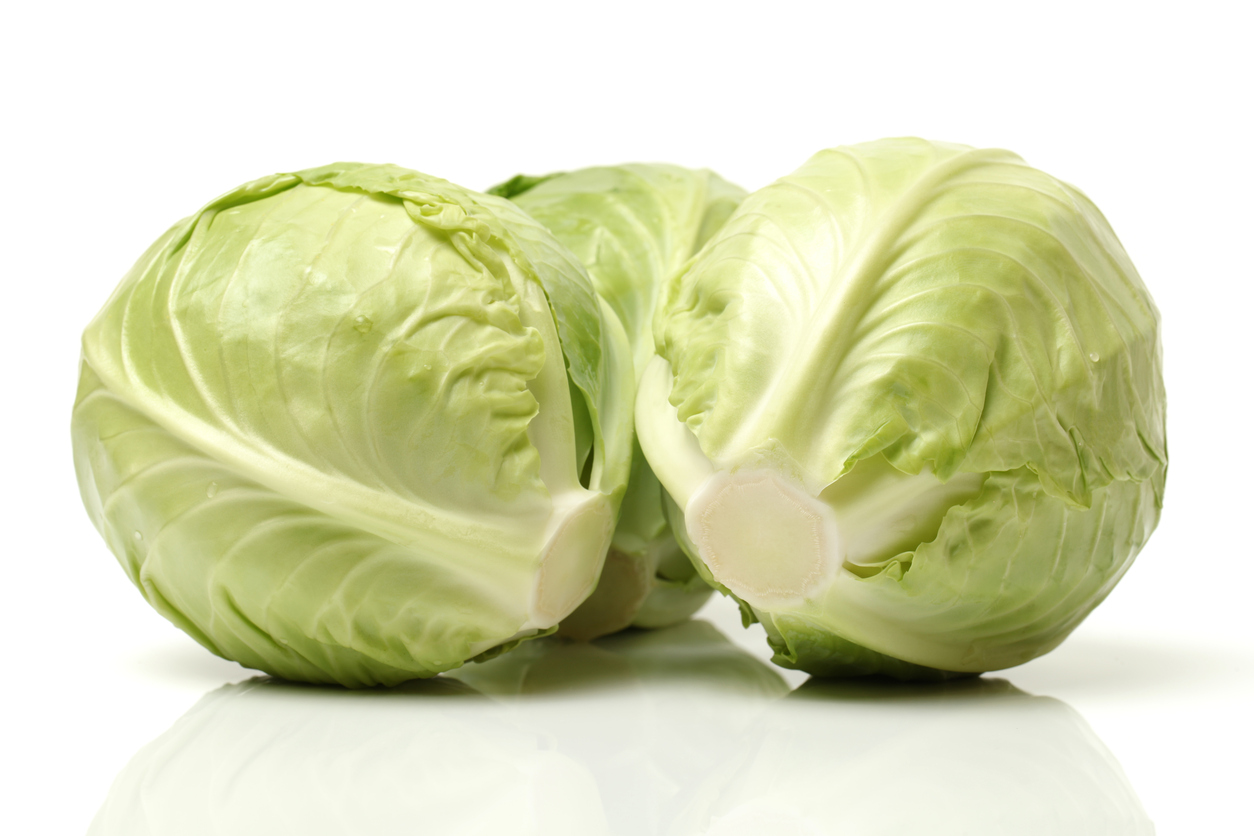 Sulforaphane and indoles, two phytochemicals found in cabbage, help to activate and stabilize the body’s antioxidant and detoxification mechanisms that dismantle and eliminate cancer-producing substances. Indoles have been shown to inhibit the growth of breast, stomach and colon cancer. These indoles tend to burn up the female hormone, estrogen, and also tend to ward off cell changes that may lead to colon cancer.

By increasing the production of antioxidants and detoxification enzymes, it helps to eliminate carcinogenic compounds, thus helping to prevent tumors. Another phytochemical found in cabbage, indole-3-carbinole (I3C), has been shown to improve estrogen detoxification and reduce the risk of breast cancer. The high content of glutamine, an amino acid that is the preferred fuel for cells that line the stomach and small intestine, is likely the reason for cabbage juice’s efficacy in healing ulcers. It is also rich in Vitamin C, an antioxidant that helps protect cells from harmful free radicals.

Vitamin C, present in fruits and vegetables, is a powerful antioxidant and anti-inflammatory. This anti-inflammatory activity may influence the development of asthma symptoms. A large preliminary study has shown that young children with asthma experience significantly less wheezing if they eat a diet high in fruits rich in vitamin C.

Foods high in vitamin K such as vegetables typically are associated with low cancer risk. Despite the fact that the anti-vitamin K drug warfarin might reduce the risk of cancer under certain circumstances, no evidence suggests that avoidance of vitamin K (from food or from supplements) would in any way help protect against cancer.

Calcium D-glucarate is available as a supplement, and is also found in fruits and vegetables in a slightly altered form D-glucaric acid. Preliminary evidence suggests that calcium D-glucarate indirectly helps the body lower its burden of estrogen – an effect that might reduce the risk of breast cancer. Although animal research supports such a possibility, no human trials have been published to evaluate whether calcium D-glucarate has a therapeutic or preventive effect.

Cruciferous vegetables – broccoli, Brussels sprouts, cauliflower, and cabbage – contain a substance called indole-3-carbinol (I3C). In preliminary research, I3C has been reported to affect the metabolism of estrogen in a way that might protect against breast and other female cancers, an idea supported by animal and test tube research. Diindolylmethane (DIM) is another substance found in cruciferous vegetables. Test tube and animal studies suggest that it may help protect against breast cancer. However, no clinical trials with cancer patients given DIM have yet been published.

Eating plenty of flavonoid- and vitamin C-rich fruits and vegetables helps to support the structure of capillaries.

Some foods, such as rapeseed (used to make canola oil) and Brassica family vegetables (cabbage, Brussels sprouts, broccoli, and cauliflower), contain natural substances that can interfere with thyroid hormone synthesis, resulting in goiter. Cooking has been reported to inactivate this effect in Brussels sprouts.

In one survey, researchers gathered information from nearly 400 people (half with MS) over three years. They found that consumption of vegetable protein, fruit juice, and foods rich in vitamin C, thiamine, riboflavin, calcium, and potassium correlated with a decreased MS risk.

Many years ago, researchers reported that cabbage juice accelerated healing of peptic ulcers. Drinking a quart of cabbage juice per day was necessary for symptom relief in some reports. Although only preliminary modern research supports this approach, many doctors claim considerable success using one quart per day for 10 to 14 days, with ulcer symptoms frequently decreasing in only a few days. Carrot juice may be added to improve the flavor.

Diets high in fruit and/or vegetables are associated with a reduced risk of stroke, according to most studies. In a large preliminary study, cruciferous and green leafy vegetables, conferred the highest degree of protection. Because it is not clear which components of fruits and vegetables are most responsible for the protective effect against stroke, people wishing to reduce their risk of stroke should rely primarily on eating more fruits and vegetables themselves rather than taking supplements.

Cabbage has a long history of use both as food and medicinal. Although appearing very different, cabbage, kale, cauliflower, broccoli, kohlrabi and Brussels sprouts all belong to the same species of plant: Brassica oleracea. The only difference between these plants are the differences that were introduced over thousands of years of human cultivation and selective propagating. In the wild, the Brassica oleracea plant is native to the Mediterranean region of Europe. Soon after the domestication of plants began, people in the Mediterranean region began growing this first ancient cabbage plant as a leafy vegetable.

Greek mythology tells us that the cabbage actually sprang from the fallen tears of a Thracian king who was to be killed by Dionysus for uprooting some of his favorite grapevines. Cabbage was grown during Ancient Greek and Roman times. It was held in high regard as a general panacea capable of treating a host of health conditions. During Roman times cabbage was a relatively expensive vegetable which was widely used in a dish that we now know as corned beef and cabbage.

The cultivation of cabbage spread across northern Europe into Germany, Poland and Russia and became very popular in local food cultures. Sauerkraut, a dish made from fermented cabbage was consumed by Dutch sailors during long voyages to prevent scurvy. By the 15th Century, cabbage was widely cultivated in many countries and was brought to North America via the early settlers.