Leptin is a a protein produced by fat cells and is involved in regulating food intake and fat storage in the body. 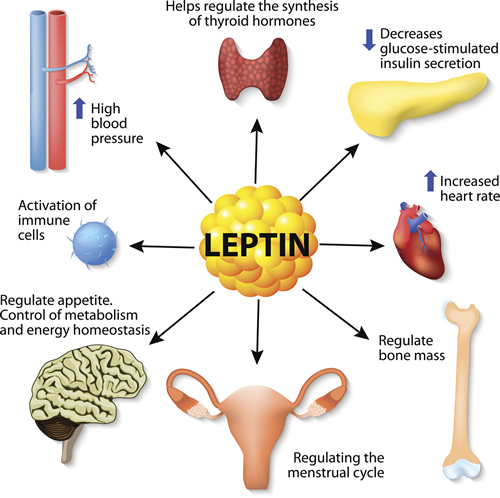 This article explains leptin’s function in relation to insulin resistance. Normally, leptin’s function is to reduce appetite and induce fat burning (among many other functions). That is what high leptin signaling in a brain would do. Low leptin (in the brain) is an indication to eat more and store more fat (to successfully reproduce and to live long enough to do so). However, elevated leptin in a fasting blood sample indicates leptin resistance and likely low leptin signaling to some parts of the brain while other parts of the brain get the full high signal. In other words, some of the brain only hears a whisper while other parts (of the brain and periphery) get screamed at.

Neither is Good Communication

Low leptin signaling getting through to the appetite center of the brain induces the brain to want to make the rest of your body hungry and will alter physiologic functions so as to make you store more fat. Ultimately, and finally, increasing fat stores should manufacture more leptin to overcome the resistance but, in the meantime, one continues to get fat and often ultimately obese. This is similar to insulin resistance, when high fasting insulin indicates low activity in some parts of your body and a disruption in insulin signaling that is being compensated for by your pancreas making more insulin. What is lost, however, is your orchestration of insulin levels among various tissues. If your liver is insulin-resistant, it continues to make sugar out of protein, and if your muscles are insulin-resistant, they cannot burn that sugar either.

However, until your fat tissue becomes insulin-resistant, it continues to “hear” the high levels of insulin that are caused by the elevated sugar, and insulin’s signals to fat tissue is to take that sugar, make fat out of it, and then store it. The positive side of this is that you’re still able to take sugar out of the blood to make fat out of it. This keeps you from becoming diabetic, at least in the short-term. In this regard, one could say that obesity is the price one pays to keep from becoming diabetic. One continues to gain weight until the adipose tissue ultimately becomes resistant. At this time, your “wastebasket” to store the excess sugar becomes full, sugar accumulates in your blood, and conventional medicine will diagnose you as a diabetic, though the root problem of insulin resistance and perhaps more importantly, leptin resistance, began decades prior (perhaps even before you were born if your mother was feeding you lots of sugar/starches when you were a fetus).

Likewise, when one becomes leptin-resistant, as indicated by high fasting leptin, once again you lose the fine orchestration of hormone levels. As the appetite control centers in your hypothalamus become leptin-resistant and cannot hear the message from leptin to curb hunger and stop storing fat, it believes that you do not have enough fat stores to live through a potential famine and you must eat more and make more fat.

Also lost is the knowledge of where to put that fat, and there is a preponderance stored in your abdomen, including your abdominal organs such as your liver, disrupting your liver’s ability to listen to other signals such as those from insulin. This causes your liver to manufacture too much sugar from protein contributing to diabetes, and contributes importantly to the breakdown of your muscle and bone causing weakness and osteoporosis.

The communication and knowledge of where to put calcium is also disrupted. Calcium is deposited in your blood vessels instead of your bone, which contributes to osteoporosis while calcifying and hardening your arteries.

>However, it appears that the master control center of your sympathetic nervous system in your brain does not become leptin resistant, does not put in earplugs from the years of excess noise and it continues to hear the loud messages of elevated leptin causing overstimulation of your sympathetic nervous system. This can create serious problems to your health, including the following:

Hormonal resistance is bad because of the loss of the intricate orchestration of those signals, and less so because of diminished signals that could be compensated for just by “yelling louder.” (I believe that that is a very important concept that needs to be taught to the public and doctors alike.) To summarize, normally leptin, secreted acutely in response to a meal or chronically in response to increasing fat stores, in a leptin-sensitive individual, will reduce hunger, increase fat burning and reduce fat storage.

>However, when one is leptin-resistant – as indicated by an elevation in fasting serum leptin – the part of leptin’s message that would normally reduce hunger and fat stores and increase fat burning does not get through to the brain (here mimicking low leptin), so one stays hungry and stores more fat, rather than burning it. However, the message to increase sympathetic nervous system activity gets through all too loudly and clearly, so one stays hungry, continues to get fat, and gets elevated sugar, insulin resistance, high blood pressure, heart disease and accelerated aging.

>When one becomes more leptin-sensitive after following the program outlined in the book “The Rosedale Diet“, as indicated by a lower fasting leptin, all of a sudden your brain is able to hear leptin’s messages much more clearly, and the now louder and more accurate message to your appetite control center and other parts of your hypothalamus to reduce hunger and get rid of some (lots of) stored fat gets heard. Now, your brain finally realizes that you have stored far too much fat, it is a danger to your well-being and the brain had better do something about it. The lower leptin reduces the volume that your sympathetic nervous system hears. The hormone is making less “noise,” but instead is allowing the orchestra to play the fine music that was originally written.