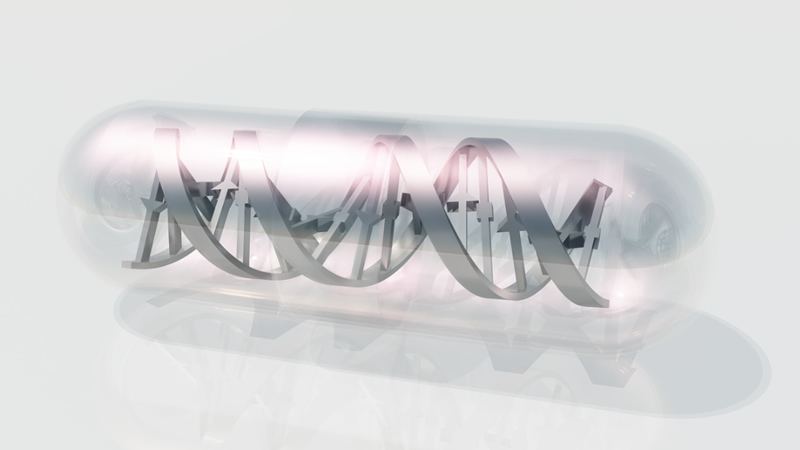 The future of medicine should be very exciting with the great potential that DNA and RNA therapies have to cure the ravages of our current era (Alzheimer’s Disease, Parkinson’s Disease, autism, infectious diseases and many chronic diseases) in a safe manner. The spiral chain of DNA makes up our genetic material. DNA makes a slightly altered copy of itself called RNA. The created RNA leaves the nucleus of the cell and travels to the cytoplasmic fluid which occupies the space between the cell nucleus and the cell wall. The RNA proceeds to act on the proteins and enzymes within the cell. Both the DNA and RNA are large molecules created from smaller particles called nucleotides which are put together in specific coded sequences. DNA and RNA are in the cells of every living organism with millions of new cells being created every minute as older cells die.

Nucleotides are necessary to synthesize new DNA and RNA so new cells divide and function properly. Persons eating a healthy diet obtain many grams of nucleotides from food. Breast milk contains 10 to 60 mg of nucleotides for every 3 to 4 ounces of milk. Sardines are loaded with nucleotides and their short life span keeps them free of mercury contamination. Buy these in tomato sauce to avoid transfats from the packaged oils. Sardines are full of RNA and are thought to enhance memory. DNA and RNA are used therapeutically to improve health. Many RNA products are made from whole RNA. These products are not as valuable as those derived from specific organs. In other words RNA from liver tissue will be more valuable in healing a liver problem than a product made from generalized RNA.

This is due to the fact that RNA from liver is a very different substance from RNA made from heart tissue. The different RNA of heart and liver results in different structure and function. As a consequence of this information an RNA product derived from liver will prove to be more valuable in treating a liver disease than a generalized RNA product. Microbiologist, Dr. Amy Yasko, has pioneered the extraction of RNA from yeast called saccharomyces cerevisiae. By incubating this yeast in different environments she has been able to produce different types of RNA that have greater value in regulating different parts of the body than does the nonspecific RNA. She has written two fine books about autism and brain diseases The Puzzle of Autism and The Power of RNA.

Dr. Robert Rowen recently treated a 3 year old boy named Sam. This boy was healthy until age 18 months when he lost all his speech over a 3 week period. This often follows the administration of a vaccine at this age. Many autistic children have food allergies and it is important that they be maintained on a casein and gluten free diet until they have completely recovered as many of these children are allergic to milk protein and wheat. Dr. Rowen started Sam on three RNA products -Stress, Bowel, and Health Foundation along with some supplements that have helped correct biochemical problems seen in autism. Sam improved steadily so that by 3 months he was talking, telling his parents what he wanted and when he needed his diapers changed. He had even started to read!

Autism is a national epidemic. It is impossible for a genetic disease to become epidemic. Obviously some environmental factors are causing this problem with vaccines high on the list of suspects. Alzheimer’s Disease and Parkinson’s Disease are also showing striking increases in frequency. These RNA products will work in all brain diseases. Medical supervision is necessary as the autistic patients can have healing crises with skin rashes indicative of resumption of function of the immune system and other problems. A knowledgeable health care practitioner will be of great value in managing these patients. Some of the therapies are expensive and the course of the illness often takes up to two years before complete recovery is obtained. At this point dietary restrictions can often be stopped.

Dr. Allan Lieberman began to use minute doses of natural DNA to treat patients with cystic fibrosis about 10 years ago. The DNA drops applied sublingually had an incredible effect. The thick mucus normally seen in cystic fibrosis became so thin the patient’s secretions poured out like water and nearly drowned the patient. Their pulmonary function improved and they began to gain weight for the first time in years. They no longer needed frequent hospitalization for their disease. Dr. Lieberman and his associates then began treating patients with bronchitis, asthma, pulmonary emphysema and acute sinusitis. All these disease categories responded well and patients with the nonproductive cough type of emphysema also improved.

These persons began to cough up sputum, breathing tests improved, oxygen levels in the blood increased and they became able to walk longer distances. Study of patients with chronic sinusitis revealed that these patients improved so much they would refuse to stop taking microdose DNA. Persons with acute and chronic ear infections were greatly improved. The microdoses of DNA worked well in all these diseases and did not produce any side effects. Many persons with ear infections have viral illnesses and are not helped by antibiotic therapy. The use of microdose DNA will significantly decrease the development of resistant bacteria species by decreasing the quantities of antibiotics used. In addition to liquefying sputum microdose DNA appears to decrease allergies.

Dr. Leiberman’s associates have learned that 80 to 90 % of infants with cold or ear infection symptoms given one drop under the tongue every 15 minutes for 4 doses followed by one drop every one to two hours will stop crying so therapy can be decreased to four times daily. Dr. Leiberman suggests that every household have a bottle of natural microdose DNA for use in stopping infectious respiratory illnesses. My guess is this therapy will have a good chance to possibly reverse the downhill course of patients with Alzheimer’s Disease and Parkinson’s Disease. The results in autism are very exciting. DNA and RNA therapies probably work by improving the bioresonance of sick cells.