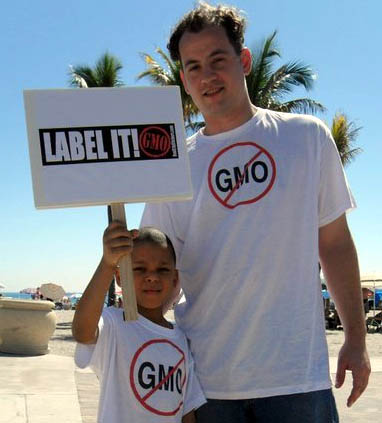 This may be a huge turning point in our existence as a species. If we blow this opportunity to preserve our right to know whats in our food, we may lose the genetic blueprint of our species, or even become extinct. Do you think I am exaggerating?

Californians have the opportunity on November 6 2012 to pass a law that will require the labeling of food products containing GMOs.

They are (again) the weather vane state if Proposition 37 passes, they will preserve our right to know what is in our food. If it fails, our species could be doomed. You may think I am exaggerating, but I am not.

After 45 years of hard work and grassroots struggle, the organic community has built up a $30 billion organic food and farming industry and community. But 10% annual growth isnt enough to avert the public health, environmental and climate crisis ahead a crisis caused in large part by industrial agriculture.

The first step toward an Organic Alternative is to pass truth-in-labeling laws. Its time to support the Nov. 6th California Ballot Initiative (Proposition 37) to require labels on genetically engineered foods, and to ban the routine industry practice of marketing GMO-tainted foods as natural or all natural. The outcome of this ballot initiative will determine whether GMO foods are labeled not only in California, but across the entire United States and Canada as well.

Today I’m asking the organic community in California and nationwide to approach the managers of the retail stores, CSAs, restaurants or farmers markets where you regularly buy your organic food and ask them to endorse Proposition 37, educate their consumers and financially support Proposition 37. We have thousands of volunteers, but we need more. Please be a part of this historic initiative!

In California there are millions of dollars being spent by big food processors and chemical manufacturers on advertising in an attempt to convince ordinary people that they should trust Big Business and accept their word that GMO foods are just fine, and that you simply do not need to know if the product is all natural (Gods design) or some patentable man-made creation that introduces into the gene pool unforeseen chain reactions.

What do you think of how the Republican side has framed this violation of Gods creation as an issue that only hippies and vegans and other liberal leaning folks could support? Monsanto and their allies have filled the California airwaves with $1 million dollars a day in TV and radio ads, spilling misinformation about how mandatory labeling for genetically engineered food will mean higher costs for consumers, lawsuits clogging the courts, confusing labels and poor farmers and grocers facing nightmares of paperwork. Such non-sense: all products are already labeled. Just tell me whats in them!

The current administration has very close ties to Monsanto, especially through Tom Vilsack. One particularly nasty issue is the unrestricted growing of GMO alfalfa, the primary cattle food. You might think it would be required that GMO crops had to be kept separate from conventional crops to reduce contamination. Not in this case. The result will be contamination of our entire food supply, because it will end up in dairy and meat products.

It is still possible to turn the tide. I don’t think that choosing between Obama and Romney will make much difference, but this direct democratic action will. I hate to be an alarmist, but if we miss this chance, we may be doomed as a species.

Please take a look at this article Excess Cancers and Deaths with GM Feed: the Stats Stand Up and then please vote.

How many more thousands or millions of dollars will the GMA spend in its desperate attempt to keep Californians from knowing whats in their food? And the bigger question: Why?