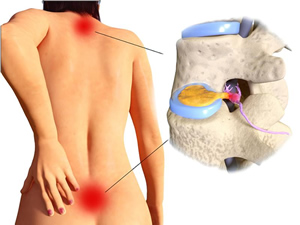 Spinal discs are small gel-filled cushions that separate the vertebrae (bones) of your spine. The disks have a fibrous outer capsule and an soft inner, the nucleus pulposus. Disks can deteriorate gradually over time (see causes below) and herniate with the smallest of movements. Or they can herniate suddenly from extreme pressure, such as from a traumatic accident. A disc herniates either when the outer shell weakens or the pressure inside builds beyond its strength. The capsule or shell either ruptures, tears or bulges. The soft inner part protrudes out, and starts pressing against a nerve. When the soft part herniates (bulges out), the pain can be excruciating. For all the pain herniated discs might create, usually you are not in danger of long-term damage.

You may be without obvious symptoms until one day, you bend over and suddenly the small amount of pressure on your spine is “the straw that broke the camel’s back”. Just enough to make the disc herniate, causing immense pain, often shooting into your legs. More often then not, disc herniation is the result of gradual degeneration.Rarely, a herniated disc might press on a nerve that controls your bladder or bowels, causing you to lose control of them. This constitutes a medical emergency requiring an immediate intervention. Disc degeneration can start early. MRIs indicate that about 30% of 30 year old people already have signs of degeneration. Herniated discs are most common in people between the ages of 30 and 50. In older people, most spinal discs have flattened out too much to herniate, although the older spine is vulnerable to other problems.

The medical establishment research suggests that people have a genetic predisposition to the problem. But the truth is that the problem is cultural. It’s your lifestyle, especially your diet, that causes these problems.

A major element causing herniated disks is a lack of enzymes. By eating cooked food, we deplete our enzyme reserves so that by middle-age we start falling apart.

The resulting heavy metal toxicity is a leading cause of weakening disks.

The “last straw” that will contribute to this weakened disk phenomenon is a viral infection (herpes, coxsackie, small pox, Epstein Barre or others). Most people will have had one or more by the time they reach their twenties. If you go to a conventional medical doctor, you will get an MRI, find out that the disc is herniated, receive epidural corticosteroid shots around the spinal nerves, and have relief for some time. Until the next episode. The next step will be more radical intervention, such as disc replacement or spinal fusion. You will continue to decline with intermittent episodes of extreme trouble that will be treated with pain killers and inflammation suppressants.

If you read this information before surgery, please consider correcting your digestive malfunction that is causing your disc damage. You should learn about supplementation with zeolite, amino acids, essential fatty acids, superfoods, vitamins, minerals, especially magnesium and natural crystal salt. Our Platinum Plus Amino Acids are not just any ordinary formula. They contain a patented combination of sulfur and molybdenum that makes the correct synthesis of proteins required for rebuilding your back possible. Contrary to what many doctors suggest, that herniated discs eventually require surgery, most people who change their lifestyle recover without it. If you do experience this type of injury, ice the area immediately (a bag of frozen peas in a towel works great). Find a competent chiropractor or a physical therapist to set things back in line. And correct your dietary habits to not only prevent future damage, but to completely restore full function to your spinal cord and your joints – this method works equally well on carpal tunnel and tennis elbow syndromes.