Himalayan Crystal Salt is THE Best 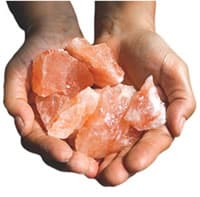 An actual Mineral Supplement with 84 minerals and trace elements…

That’s why it’s GOOD for you.

Mainstream medicine has us all convinced that salt is bad for you. And they’re right about refined table salt.  It’s little more than industrial waste and it’s VERY BAD for you.

Table salt is sodium chloride. A mere 2 elements that are leftover to season your food. After they strip away every other synergistic element to sell for profit. The remaining product is called salt. But it is nothing compared to its original, whole self. Refined salt is similar to other “white death” products like refined sugar and refined flour.

Regular consumption of Himalayan Crystal Salt will nourish your cells and can:

Himalayan Crystal Salt manages your bodily fluids. This is essential for health.

Human body fluid (70% by weight) contains a balance of minerals and trace elements. In the same proportions that are found Crystal Salt.

When dissolved, the minerals and trace elements are available to your cells in ionic form. That’s small enough to absorb into your cells. Without digestion. Unlike nutrients from food that need to be digested, to be useful.

Himalayan Crystal Salt is a storage medium for vibrational life-force energy (see more below).  That is released when Crystal Salt combines with water.

There are no additives. Simply pure Salt with a balance of nutrients that nature intended. Provides your body with the same elements from which original life evolved. All life started in a sea of salt water.

Used in almost every processed, preserved food. If you eat that kind of food, your body gets more salt than it can eliminate.

To neutralize the overdose, water molecules surround the sodium chloride. Your body takes water from your cells. Sacrificing hydration to neutralize your refined salt intake.

If your sodium chloride is still too high:

Your body recrystallizes it with proteins.

Continuous loss of cellular water brings on dehydration. We slowly dry out. Chronic dehydration is a major problem for people today.

Iodine
Iodine in refined table salt has caused diseases to increase by leaps and bounds. They claim it benefits the thyroid.

Aluminium
Added to refined table salt so it pours easily. It’s light metal, known to accumulate in the brain. Has been linked to high rate of dementia in the US. We get even more Aluminium from processed food packaging and canned drinks.

Sea salt contains minerals and trace elements. But today the sea is loaded with toxins. Not a good source for supplementation. White sea salt is highly refined and not recommended.

Whole Crystal Salt is the Foundation of All Life

It’s a commonly accepted theory that life on earth began in seawater.  The mineral balance of seawater allows organic life processes to begin.

We’re all drawn to the ocean. To recharge our batteries and regenerate. Because subconsciously, our instincts feel connected to the vibrational state of the ocean. From where we once emerged.

Dr. Henry Schroeder is a 1960s pioneer of mineral research. He treated people with concentrated seawater. The results were incredible.

Mineral deficiencies are common because modern agricultural practices have depleted our soil. This makes supplementation necessary. And easy with Himalayan Crystal Salt.

Natural life-force energy is stored in the crystals. Its structure is so profound, that its vibration pattern lasts for more than 24 hours in your body.

This provides energy for your body to regain and maintain good health.

Cellular life is largely an electrical phenomenon. All nerve impulses and cellular exchanges are initiated with electrical energy.

Himalayan Crystal Salt will build your electrolytes and your conductivity will increase. This affects your circulation. Your energy currents can flow freely once again.

Plinius, a Roman writer (23-79 AD) declared:
“Crystal Salt is the most important remedy for mankind.“

This special Himalayan Crystal Salt is waiting to have its inherent stored energy set free, by adding water.

There are a multitude of ways to use this amazing salt. Take a look at “Himalayan Crystal Salt Brine Therapy“.

For thousands of years salt has been known as a panacea. Alchemists called it “the fifth element” (besides water, earth, air and fire). Its qualities were comparable only to ether, the actual fifth element.

Crystal Salt appears in transparent, whitish, pinkish or reddish shiny veins in mountains. The white and purest, nearly transparent Salt Crystals come from a thin layer of the mine. They look like uncut diamonds. These are the edible crystal salts. The darker salt stones are processed into Bath Crystals.

Crystal Salt is the purest, highest grade. Taking millions of years under great tectonic pressure to mature into crystals. Rare because it happens only where sufficient pressure was available.

In these places, the Crystal Salt contains eons of highly concentrated  energy. A high concentration of life-force energy. Untouched by any pollutants.

Compare its structure to a diamond.
The more transparent and colorless the crystals are, the higher their purity. The more geometrically perfect the shape is, the higher energetic content.

Ancient cultures all over the world valued natural salt tremendously.

Our Crystal Salt is carefully harvested by hand. WithOUT explosives and heavy machinery. 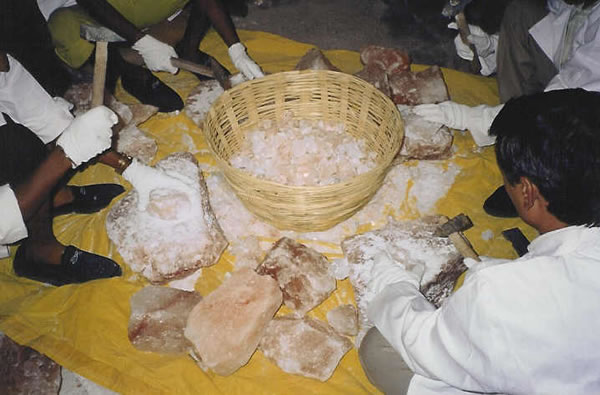 The Salt Rocks (30-50 kg) are manually cut from the mine. Then they’re washed in brine, sun dried and sorted by color. 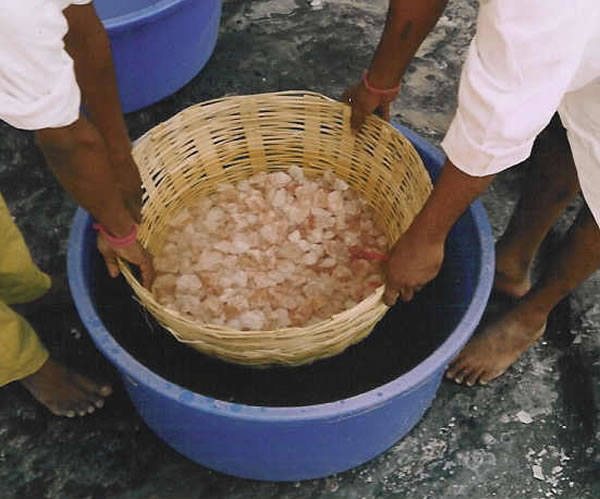 The purest Crystal Salt is shipped to Germany. There it’s inspected and certified to German standards by SGS (Society Generale de Surveillance).

Our Crystal Salt comes from Jeveda or Jevatee, by Asia Import GmbH.

Crystal Salt from the Himalayan Mountains was used for conducting the medical research revealed in the book “Water & Salt, the Essence of Life” by Peter Ferreira.

Several hundred doctors and therapists use this ancient holistic knowledge. For thousands of years, doctors have successfully treated their patients with nothing more then water and salt!