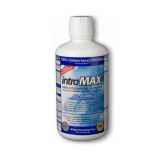 Analysis below was taken on an individual before taking intraMAX. It shows several measures but concludes with a qualitative analysis of overall fitness level with a scale of 1.1 = The best physical fitness to 13.7 = the worst physical fitness.

Significant change is observed in heart rate variability simply with the addition of intraMAX. The type of response demonstrated in this example has been repeated on many other patients with similar results.

The pictures below show a subject’s blood analysis using a dark stain technique perfected by Dr. Harold Klassen, who has over 16 years of blood research.

The thermal imaging technology used measures differentials in temperatures and displays them as spectral colors. Cooler temperatures are shown as blacks, blues, and greens (see scale on side of picture below). Warmer temperatures display more in the reds and purples.

The individual shows an increase in blood flow circulation which increases internal body heat. These pictures were taken by an independent party. The thermal imaging equipment used to take these pictures is FDA approved.

Several different analyses have been performed on intraMAX and intraMIN to certify the presence of all ingredients listed on the label. These tests included:

Discussion:
The purpose of this study was to evaluate the changes and differences among test subjects consuming a 100% organic microcomplexed liquid nutritional dietary supplement, and a control group.

The participants, ages 19 to 51, were placed into Group A (Control Group) or Group B. The Control Group consisted of 21 men and 19 women who consumed various brands and forms of daily multiple vitamins (generic and non-generic). Group B (23 men and 17 women) consumed one (1) ounce per day of intraMAX. Both groups were engaged in exercising at a fitness center, a minimum of three (3) times per week utilizing cardiovascular training, weight resistance and stretching.

The results demonstrated a very clear difference in muscle mass, body fat, and metabolism between the two groups:

Important findings:
87% of the intraMAX group (Group B) reported more energy compared to 22% of Group A.

The intraMAX group (Group B) gained about three quarters (3/4) of a pound more muscle than Group A.

The women who took intraMAX (Group B) lost more body fat than the women in Group A.

Both men and women taking intraMAX lost an average of almost one pound more than those in Group A; they also decreased their body fat by 41% while their metabolic rate increased by 25%.

Both groups reported the following on survey:

intraCELL V Technology is a unique and proprietary “carbon-bond” technology scientifically designed to maximize intra-cellular and extra-cellular (interstitial fluid and fatty tissue) detoxification as well as rapidly infuse over 265, 100% organic microcomplexed nutrients into the cell.

intraMAX is an exceptional ultra hypoallergenic (for environmentally/chemically sensitive persons), great tasting liquid formulation for anyone desiring to increase energy, strength, stamina and vitality. One (1) ounce per day appears successful in: maintaining healthy nerve function(s), assisting the body in preventing allergies, colds and the flu, building and repairing blood, bones, muscles, tissues, joints, ligaments and tendons, as well as reducing “free radical” (oxidation) damage to the body’s cells, slowing the aging process. For peace of mind intraMAX has a prestigious Certificate of Analysis insuring that all its ingredients work together with each other at optimal levels to bring the person seeking health and wellness perhaps the most scientifically advanced product available.

It is the author’s contention that intraMAX 100% organic microcomplexed liquid dietary hypoallergenic supplement:

In February 2008, Drucker Labs launched a research study that was performed by Fenestra Research Labs to study the affects of intraMAX® on a variety of subjects with various cellular imbalances. It was a 30-day study that included 125 subjects, 50 of which were a placebo group. Although the final report is not complete, the preliminary results are both excellent and exciting! Here was Fenestra Research Labs’ preliminary conclusion:

Statistical analysis of these data shows a consistent picture between treatment groups over time. Results were race, sex and age independent. No adverse events whatsoever were reported during the study.
intraMAX® Study Result Overview

Based on these clinical comparisons and the complete lack of known adverse side effects, interactions, or contraindications from the ingredients in the product, intraMAX® was shown to be a safe and highly effective means of improving ones nutrition while helping to maintain or improve cellular systems functions.
intraMAX® is Safe and Effective
The study was performed by Fenestra Research Labs to evaluate the safety and efficacy of intraMAX® during the trial period. The purpose of the research was to measure the effect of intraMAX® on normalizing and improving overall healthy cellular function. This trial indicated that intraMAX® is quite effective in detoxifying the body, helping various organs and systems to work better-and thus promoting your overall good health!* And this very positive result was also confirmed by an independent peer review.
Description of the Trial:
Fenestra Research Labs conducted this clinical trial to examine the effects of intraMAX® on subjects using the Optimal Wellness Test (OWT). The OWT measures 39 standard biochemical parameters or “markers” in urine and saliva, and from these measurements, health at the cellular level can be ascertained. The OWT can also be used to determine how a product alters cellular metabolism, which can then be extrapolated to assess organ system function. The study was a double-blind, placebo-controlled test performed on 125 test subjects. This was a thirty day test period, with the two groups randomly assigned between the test group which was given the product (exactly according to label directions), and the placebo group subjects.
intraMAX® Is Safe:
During this trial on intraMAX® there were the following results indicating safety:

intraMAX® Is Effective:
Details of the efficacy results supported by the clinical study’s findings on intraMAX® can be grouped into 4 areas:
ENERGY:

[Note: In all measurements of positive effects, the conclusion of improvement is based on a comparison of the baseline data taken before the product use began with the data after 1 month.]
CELLULAR FUNCTION:

NOTE: Specific Gravity is a laboratory test that measures the concentration of particles in the urine. Specific Gravity is a function of the types and amounts of solids found in solution. The more there is of a substance in solution, which is heavier than the water, the higher the specific gravity will be. With dehydration, whether it is intra or extracellular, the specific gravity of fluids is higher because the water content goes down as the solids go up; the converse is true for increased hydration. The higher the fluid content the better the hydration levels in the body. The study group on intraMAX showed a significant positive change in their overall Specific Gravity test, thus showing increased hydration.
DETOXIFICATION:

Based on these clinical comparisons and the complete lack of any known or reported adverse events, side effects, interactions, or contraindications from the ingredients in the Product: intraMAX® was shown to be a safe and highly effective means of Improving one’s overall wellness, and helping bodily systems to function at their best.*
An Independent Trial:
Neither the owner of Fenestra Research nor any of its employees have financial ties to Drucker Labs, the formulator and manufacturer of intraMax®, and therefore Fenestra Research provided a non-biased study on Drucker Labs’ supplement intraMax® in terms of not having a financial interest in producing a desired outcome. In addition, the peer reviewer of the study was completely independent of Drucker Labs.