Flu Prevention Instead of Flu Shots

I thought it would be good for you to see something about the not so long ago government mass attempt to deal with the flu. If you have not heard from the official news media (the ones controlled by the pharmaceutical advertisers) that you will either die or be terribly inconvenienced by getting the swine flu in the next few months, you must be living a very sheltered life. As I am hearing it, they definitely want us to think that the end of the world as we know it is near. The H1N1 strain has been hyped up to highest level.

The danger rating only means that it spreads fast. It does NOT mean that it is fatal. The known fatalities were all people with underlying medical conditions, and I would assume that they could have died of any infectious disease. Still, who would like to get the flu, anyway? Do you know that 36,000 Americans die of the ordinary flu every year? So why would a few hundred more cases be a cause for alarm? Are they just looking for an excuse to sell a lot of vaccines? Or to create a compulsory vaccination program? There is a chance that the virus could mutate and become something quite dangerous to some people. Who do you think would be vulnerable? Not everybody.

The acid-alkali balance in your lymphatic system has a direct relationship with its oxygen carrying capacity. With lower oxygen level the infection frequency rises. The more you eat acidifying foods, the lower your ability to resist germ-based infections. Have you never wondered why only a few kids in the class, or a few people in the office get sick with it when it arrives? Why not everybody? Because only people with a ready to go cellular terrain will be the ones chosen. Not randomly, but by their own actions.

pH Perfect is an alkalizing, balancing formula to restore balance in your intestinal tract and interstitial fluids. If you have not maintained a good cellular terrain, you or your loved ones might need it. Get prepared. This time it could be worse, because they are not even testing the vaccine, they are just going to unload it onto the population, starting with children. 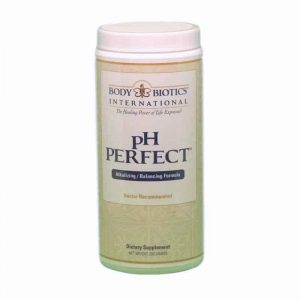