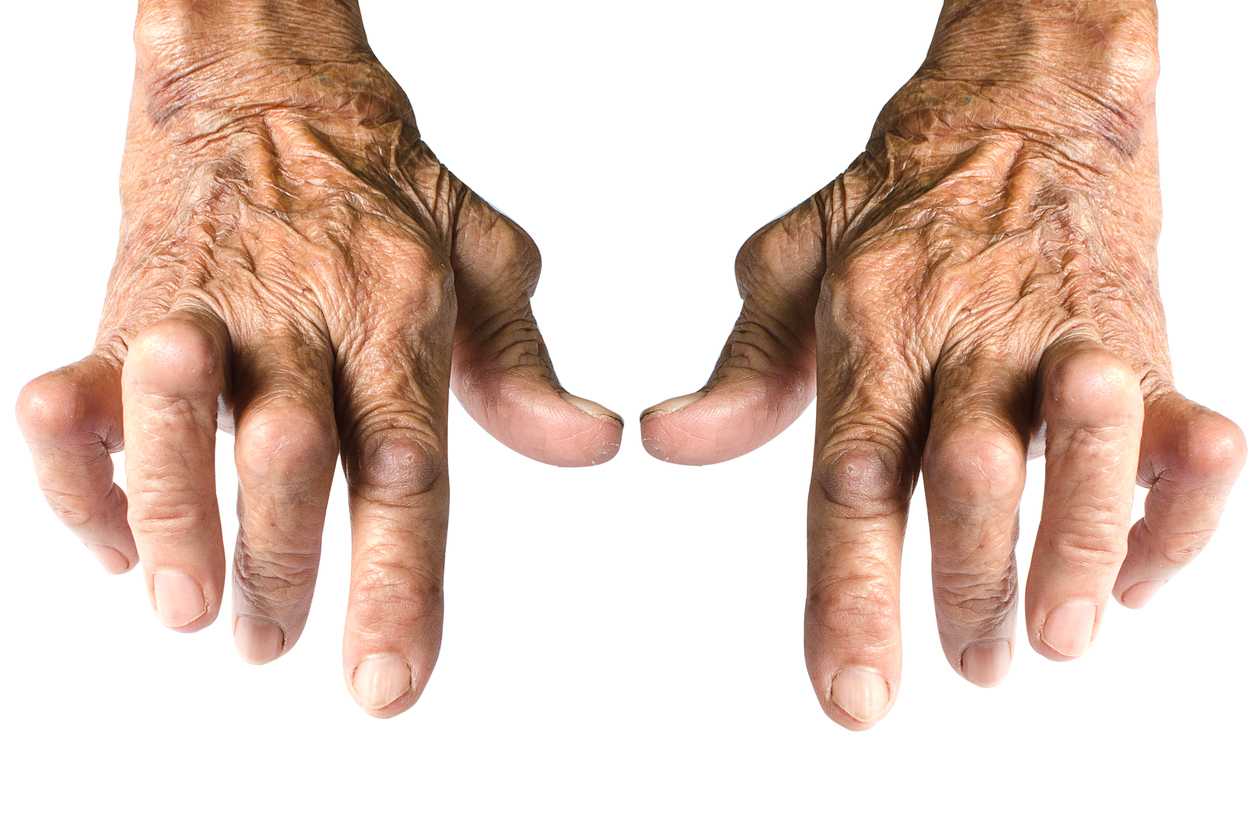 Rheumatoid arthritis is a special type of arthritis. It is a systemic disease which predominantly affects the joints causing inflammation and sometimes progressive joint destruction and deformity. It affects about 2 percent of the population, being three times more common in women than men. It most frequently begins between the ages of 30 to 40 but can be found in quite young people.

The cause of rheumatoid arthritis is unclear, but it is thought to be an autoimmune disease where the immune system makes antibodies that attack the connective tissues in the joints and tendons (see Autoimmune Disease). This affects mostly the joints of the hands, feet, wrists and ankles. However, even in people that, from a genetic point of view, have a high susceptibility to the disease, not all go on to develop it, leading researchers to believe that an environmental trigger may play a role in its initiation. Possible triggers are poor diet high in saturated fats and processed foods, viral infections, food allergies and intolerances, obesity and smoking.

How is it diagnosed?

In addition to showing the signs and symptoms mentioned below, blood work will show presence of immune complexes which are combinations of antibodies and antigens also known as the ‘rheumatoid factor’.

What are the symptoms?

The inflamed joints are generally painful, stiff and swollen. Most sufferers of rheumatoid arthritis eventually have many joints involved including hands, wrists, elbows, shoulders, cervical spine, knees, ankles and feet. Over time, there may be partial remissions and relapses of the joint disease. In some people the arthritis is mild with little progression. In others, the joints may gradually weaken, with muscle wasting and joint instability to produce characteristic deformities. Around 10 percent of sufferers will be severely disabled and around 40 percent moderately disabled. Other possible manifestations of the disease include scleritis (painful red eye), dry eyes and mouth (see Sjogren’s Syndrome), nodules especially on the elbows, carpal tunnel syndrome (pressure on the nerves in the wrist causing pain and tingling), inflammation of the tendons, anemia, enlarged lymph glands, pleural effusion (fluid accumulation around the lungs), and amyloidosis (abnormal protein deposition) causing kidney disease.

The activity of rheumatoid arthritis is affected by hormonal variations that occur at times of hormonal change such as puberty, pregnancy, and menopause. Hence, estrogens seem to play a central role. It is well known that during situations where there is an estrogen deficiency, such as menopause, that women have an increased risk of developing Rheumatoid Arthritis and show an increased progression of the disease.

Sufferers of rheumatoid arthritis are encouraged to continue a full and active life. Physical activity will not increase the progression of the joint disease. On the contrary, simple exercises to maintain joint mobility and strengthen the muscles are recommended.

Learn about Metabolic Typing, find your optimal diet, and follow it. More likely than not you will need to increase your intake of proteins and essential fatty acids, which will mean a lot of salads, lightly cooked vegetables, and fish. You will need to avoid refined foods: sugar, flour, salt, oil, fried foods and over-heated fats, alcohol and other high-glycemic index foods, and stimulants, especially coffee.There have been an increasing number of reports of an association between food sensitivities and rheumatoid arthritis. It may well be worth trying an elimination and challenge diet to identify possible problem foods. Foods to which patients seem to be most sensitive include dairy products, wheat, beef, peanuts and foods from the nightshade family like eggplants, potatoes, tomatoes and peppers.

Fresh raw fruit and vegetable juices are also highly beneficial. Consider trying a two or three day juice fast every month. Pineapple juice is excellent; pineapple is the only source of bromelain, which has anti-inflammatory effects. Drink it on its own or juice some pineapple together with some fresh ginger and apple. Other beneficial and tasty juice combinations include broccoli, celery and garlic; or parsley, spinach, carrot and celery. Dr Cabot has known about the incredible healing power of raw juices from a very young age. Her grandmother’s life was saved by raw juicing back in the 1930s. Raw juices are an incredible powerful healing tool and can improve the function of the liver, bowels and kidneys. This increases the elimination of toxins and waste products from the skin. Appropriate juice recipes found in Dr Cabot’s “Raw Juices Can Save Your Life” book. Recommended juices for arthritis are:

Celery Balancer on page 49: This juice will reduce acidity and inflammation in the joints. It is helpful for all types of arthritis and especially gouty arthritis.

Joint-Eze: In this formula we have included all these ingredients plus Sea Cucumber, which is an added source of glucosamine and chondroitin sulfate. To further enhance pain relief we have also included the natural anti-inflammatory substances Curcumin C Complex, Bromelain and Quercetin. Glucosamine sulfate, which is the building block of the ground substance of articular cartilage, alleviates joint pain and tenderness and may improve swelling and joint mobility when taken in a dose of 500 mg two to three times daily. Chondroitin sulfate is also an important component of cartilage and helps joint lubrication. Many sufferers of arthritis and fibromyalgia take Glucosamine, which helps to maintain and repair joint cartilage. If we add some herbs to reduce inflammation in the joints this will provide a much greater degree of pain relief than glucosamine by itself. Traditionally it has been found that the most effective herbs to reduce joint and muscle pain are: Boswellin, Yucca root, Alfalfa and Devil’s claw.

Livatone Plus: 2 capsules twice daily before food. Supports the phase one and two detox pathways in the liver which is of vital importance when combating any type of autoimmune condition. Phase 2 liver conjugation has been shown to be reduced in patients with rheumatoid arthritis. This formula also contains B vitamins. Pantothenic acid (vitamin B5) is helpful in reducing stiffness, degree of disability and severity of pain. A deficiency of pantothenic acid is common in rheumatoid arthritis and correlates with the severity of symptoms.

Organic Flaxseed Oil Capsules and Cod Liver Oil, three times daily: These are anti-inflammatory and have been shown to be highly effective in reducing symptoms of rheumatoid arthritis and/or decreasing the need for more toxic medications. As mentioned above these fats may improve the balance of prostaglandins in favor of the anti-inflammatory PG1 and PG3 families.

MSM Plus Vitamin C, tsp 2 x day. MSM Stands for methyl-sulfonyl-methane which provides the chemical links needed for collagen synthesis and is an essential component of chondroitin and glucosamine sulfate, which are needed to form joint cartilage and integrity. MSM is highly bioavailable, entering all the tissues within 24 hours of oral ingestion.

It may take up to three weeks to see results.

Medical treatment of rheumatoid arthritis revolves around the use of a variety of drugs which, unfortunately, all have the potential to cause serious side effects. Nonsteroidal anti-inflammatory drugs (NSAIDs) are commonly used, particularly for early mild disease. These agents are often very effective in reducing pain and stiffness, but may cause peptic ulceration and kidney toxicity. Headache, rashes and mouth ulcers may also occasionally develop. A newer NSAID called celecoxib is much safer in this regard.

The second line of therapy consists of the so-called disease modifying and slow-acting anti-rheumatic drugs. These medications are able to alleviate symptoms, impede the progression of inflammation in the joints and, very importantly, to inhibit the development of joint erosions and destruction. For this reason, current medical opinion is that these drugs should be introduced early in the course of the disease. Drugs in this class include gold injections, gold tablets (auranofin), hydroxychloroquine, sulphasalazine and D-penicillamine.

Gold injections are given every one or two weeks for the first four to six months, and thereafter every four weeks. Regular urine tests to check for protein and blood counts to look for an abnormal drop in white blood cells are mandatory during treatment with gold injections. Patients also need to be monitored for rashes and flushing of the skin. Gold tablets, which are given twice daily, are not quite as effective but have fewer adverse affects. However, diarrhea is common, and stomatitis (inflammation at the corners of the mouth), taste disturbance and rashes may occur. Monitoring of blood and urine is also still recommended. Hydroxychloroquine is comparable in terms of efficacy to that of gold tablets. Although not commonly encountered, the retinas (at the backs of the eyes) can be damaged by this drug and so it is advisable to be assessed by an eye specialist at the start of treatment end then every six months. Other side effects include an increased sensitivity of the skin to ultraviolet light and indigestion. There is a low risk of a drop in the level of white blood cells, so regular blood counts are also necessary. Sulphasalazine is another effective medication. Its most common adverse effects include gastric upset, headache, skin rashes and taste disturbances. Regular blood tests to check liver function and white cell counts are recommended, as liver toxicity and low white cell counts may occasionally occur. D-penicillinamine is on par with gold injections in its therapeutic benefit. Minor side effects like gastric upset, rashes and taste disturbance are common. Thinning of the skin and nails may occasionally occur. The most serious adverse effects are kidney toxicity and reduced numbers of white cells. Again, regular blood and urine tests are a necessity.

Another class of drugs used in the treatment of rheumatoid arthritis is the immunosuppressive agents such as methotrexate, azathioprine, cyclophosphamide, chlorambucil and leflunomide. These are generally reserved for those patients who have not responded to the disease modifying drugs, although methotrexate is being administered more frequently now as second line therapy. Methotrexate is administered as a single weekly dose and should be accompanied by folic acid 0.5 mg given twice daily to minimize side effects. Improvement of symptoms may be seen after four weeks of treatment. The commonest adverse effects are mouth ulcers, nausea and abnormal liver function tests. More rarely, the lungs and blood cells may be affected. Patients should avoid alcohol during treatment. Azathioprine is given daily and is more likely to cause side effects such as gastrointestinal upset, rashes, fevers, malaise and liver function abnormalities. Bone marrow suppression and pancreatitis are rare complications. Cyclophosphamide is administered daily; potential side effects include loss of hair, inflammation of the bladder, inflammation around the corners of the mouth and bone marrow toxicity. There is also an increased risk of developing cancers. Chlorambucil is only used occasionally because it also suppresses the bone marrow and potentially induces cancers. Leflunomide is a newer immunomodulator drug indicated for those patients in whom the other agents are inappropriate. It can also cause similar side effects to those listed above. With all of these medications, regular blood and urine tests are mandatory.

As you can imagine, embarking on any of these treatments is a bit like entering a minefield! If any of these drugs are prescribed for you, ensure that you are fully informed of all the possible adverse effects and monitoring required. The balance between risks and benefits must be carefully weighed up for each individual patient.

Finally, surgery may also have a role in the management of certain cases of rheumatoid arthritis. Removal of the inflamed lining of the joint (synovectomy), fusion of joints and joint replacements are some of the possible surgical treatments.