Steve Jobs and the Truth About Cancer 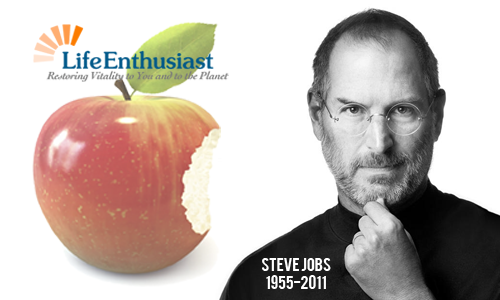 Today’s episode of the Life Enthusiast podcast with Martin Pytela and Scott Paton is dedicated to the memory of Steve Jobs, the brilliant mind behind the Apple brand, who died in October 2011 at the age of 56 from pancreatic cancer. Jobs was the founder and CEO of Apple Inc. What started as a small garage business with two friends in Steves fathers workroom in Cupertino in 1976, ended up being one of the most significant and valuable brands in the world with total revenue of over 180 billion dollars in 2014.

From the wooden typewriter-looking Apple 1 to iPhone 4, the last model introduced by Jobs himself, Steve with this signature turtleneck went through all kind of ups and downs in his personal and professional life. He was adopted as a baby and originally came from Syrian and German heritage, but he was raised by his adoptive parents in San Francisco where he started Apple Computers at the early age of just 16 years old. He was fired from Apple in 1985 and started a company called NeXT Computer, only to return to Apple at 1997 with NeXT OS later being the foundation for the new Mac OS X. Jobs also was the primary owner of Pixar studio, and the very famous Pixar movie Toy Story has him credited as executive producer.

He was a perfectionist and he expected that from others, too. It was very difficult to work under his lead because of his mood swings, tantrums, and egotism. He dismissed employees for no apparent reason, he wanted to control everything, and he hated even a slight indication that something was not working the way he wanted it to. On the other hand, he was an excellent speaker, true visionary, and very successful in inspiring others with his vision. He knew what the market needed and what people were willing to pay for; he made special products for special people. He wanted his customers to feel unique, so he delivered unique machines.

If you read his biography, written by Walter Isaacson, you might remember that his father, while making some furniture, taught him that all the parts of the product must be perfect. Even the back side of the cabinet, the one side that is always facing the wall and therefore is hidden from our eyes, must be perfectly crafted. Just because we don’t see it doesn’t mean it should be sloppy. That influenced why every Apple product that Jobs was involved in was perfect in every detail. We share this passion for excellence. Most people don’t know, but on the inner side of the old Mac Plus, you can find signatures of every worker that had something to do with that particular product engraved into the metal casing. Even though Apple products are impossible to open by users, because the company uses their own special type of screws, Jobs wanted to be sure that his products looked perfect on the inside too. Placing those signatures inside of the computer, even though nobody will ever be able to see them, sounds like a perfect tribute to his father, who taught him all about perfection in every detail.

Jobs was a big proponent of Zen Buddhism and also had very unusual dietary approach. Sometimes he only ate apples and carrots for weeks; he ate a mostly raw, Vegan-like diet with almost no fat and very little protein. He even spent a short time being a fruitarian and practiced long fasting periods, during which ketones (chemicals released as a substitute for glucose in times of fasting) served him as a source of energy. He believed he was detoxing and refused to take showers, even though his friends and employees complained about the unpleasant odor his body was releasing. He walked and worked barefoot a lot, not washing his feet either.

Despite his dedication to these supposedly health promoting practices, Steve Jobs was diagnosed with pancreatic cancer in 2004 and his prognosis was not very optimistic. Pancreatic cancer is a rare form of the disease that is believed to be curable with surgery. Jobs decided not to undergo the operation and instead tried to treat himself with alternative methods. He continued to work and create until 2009 when he announced the he was leaving his role as CEO of Apple Inc., went through a liver transplant, and later in 2011 he lost his battle with cancer. Some people believe his weird diet helped him to live longer than doctors predicted, while others say that he could still be alive today if he had been willing to abandon his eating habits and undergo surgery earlier. Either way, Steve’s legacy still is alive in the Apple brand itself and for loyal fans and customers, Jobs will always be the spirit of Apple Inc.

Steve Jobs was not the only person defeated by cancer. This disease is taking lives every day; rich and poor, male and female, old and young. There is not just lung cancer caused by smoking, or breast cancer, even though these two are the most common types in the world. There is liver cancer, thyroid or gallbladder cancer too, skin melanoma, or leukemia, among many others. The Truth About Cancer is a brilliant documentary, that has been billed as the documentary series the mainstream media refused to air. This series uncovers the truth most doctors are not telling their patients about cancer treatment and prevention, including the fact that it is possible to prevent and cure cancer by lifestyle changes, by focusing on immune system health, by all natural remedies and detoxification.

You don’t want to start fighting the disease once your body is already at war, you want to prevent it and do your best to avoid the behavior and lifestyle that can lead to cancer. There is a way to do it and it is all under your own control. Martin and Scott talk all about cancer prevention, treatment, and taking an individual approach to help you understand that health is not something we should take for granted.We have to treat our bodies with great care in order to keep them working in our favor, living a quality life. Steve Jobs was a significant individual and his brilliant mind will be missed in the world, but YOU are just as important, and you deserve to know how to stay in this world, fit and healthy for the longest time possible.