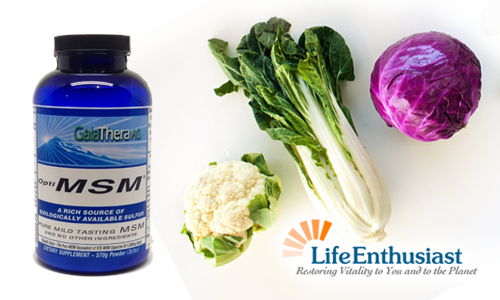 We are often told to eat our vegetables to get vitamins, drink enough milk because of calcium, use sea salt for iodine, eat egg yolks for their healthy fat profile, or eat brazil nuts to get our daily dose of selenium. But sulfur is something we don’t hear or read about very often, or at least I have never heard anyone telling me: eat your onions because they have plenty of the sulfur your body needs. When you think of sulfur, you probably think of match heads, glass, or even the paper industry. I spent four years in high school living in a city with the biggest paper factory in my country, and the smell of sulfur used to bleach wet paper matter was horrible and when it rained, yellow sediments appeared around the puddles of water on the ground.

But sulfur is not just a popular chemical component, it is actually the third most abundant element found in the human body! There are around 140 grams of sulfur in an average adult body, and it is not by accident. Sulfur is so important for our overall health it sometimes makes me wonder why is it not talked about more often. We hear about minerals in general being important and how dangerous a deficiency in certain micronutrients can be, but I believe sulfur deserves special attention because it is involved in so many vital processes in the human body.

Because of its antibacterial and antifungal properties, you can see Sulfur as one of the ingredients on the label of lotions, bar soaps, anti-dandruff shampoos, and acne treatment products. Sulfur is commonly used as a chemical component in dyes, explosives, and fertilizers, but also in cosmetics. In ancient Greece, sulfur was used to cure wounds and speed up the healing process. Today, sulfur is commonly used to treat different health conditions including hypothyroidism, arthritis, chronic pain, and various skin disorders. Why is it so potent, and what does it actually do in our bodies? Why should we eat plenty of sulfur-rich vegetables and how should we prepare them in the kitchen? Maybe after reading today’s post, bright red match heads will not be the first thing to pop into your head when you think of sulfur.

SULFUR IN THE BODY

So what is the deal with sulfur? The truth is that sulfur is vitally important to human health because it is involved in many biological processes that happen inside of our bodies. It plays a major role in the health of our skin, hair, and nails, as well as cartilage and connective tissue, joints, and muscles. With age, our bodies lose their overall elasticity and flexibility, skin gets wrinkly, hair become thinner, muscles and joints become stiff, and our mobility decreases. Sulfur is critical for creating a strong, but flexible bond between proteins in our body. Without sulfur, our tissues, ligaments, and bones lack flexibility and elasticity, our body becomes overall less flexible and more fragile. Hair and nails (but also feathers in animals) are created with keratin, a protein that requires sulfur to keep its structure and flexibility.

Sulfur is also important for the synthesis of glutathione (an important antioxidant present in every cell in our body that helps to control inflammation, blood pressure, liver function, and DNA synthesis), taurine (essential for cardiovascular and nervous system health) and also for the conversion of thiamine (vitamin B1) and biotin (vitamin B7), both of which are important for the proper metabolization of carbohydrates and converting them into energy. Insulin, one of our most important hormones in the body, is created by two chains of amino acids connected together by a strong sulfur bond. With enough sulfur in our body, we can experience less pain and stiffness, more energy and vitality, beautiful hair and nails, improved elasticity of joints and muscles, and even improved digestion and faster detoxification.

Sulfur also helps to remove lactic acid from your muscles after a workout or other intense physical activity, helping your body to recover faster and prevent muscle soreness and pain. Sulfur works directly with vitamin C to repair tissues and strengthen our immunity, it makes cells more permeable to allow nutrients and hydration to get inside of the cells, and to remove toxins and waste more effectively so less energy is needed for the detoxification process. Instead, our body can use all that extra energy to speed up healing and increase nutrient absorption and digestion. As you can see, sulfur is not just some accidental bystander in the background, it is responsible for many vital functions that are absolutely necessary for life. We need more dietary sulfur, no doubt about it. The question is, where do we get it?

SULFUR IN THE FOOD

Just as in the human body, sulfur is abundant in nature. It is naturally present in unprocessed whole foods, including beef, chicken, eggs, pork and full-fat pastured dairy. But the reason why we should focus more on plant-based sources of sulfur, according to Mark Sisson, is that: “sulfur-rich vegetation tends to come with extremely potent organosulfur compounds that offer a lot of benefit to those who eat them. Animal sources may contain plenty of sulfur-rich amino acids, which we undoubtedly require, but they don’t contain the organosulfur compounds.” Onions, garlic, broccoli, chives, celery, brussels sprouts, cabbage, cauliflower, leeks, fennel, and bok choy all fall into the sulfur-rich category. Onions, shallots, garlic, and leeks fall into the allium group, and the organosulfur compound present in these vegetables has shown some potential anti-cancer properties. Onion is considered a very powerful home remedy for a reason! Organosulfur compounds in broccoli, cauliflower, and cabbage have also been studied for their effects on oxidative stress in type 2 diabetics, and reducing the absorption of carcinogenic compounds.

Organosulfur compounds like allyl sulfur or sulforaphane are not very stable in high heat, so cooking with high temperatures usually breaks down most of these compounds. Eating raw broccoli or cabbage is not the most disgusting thing in the world, but I doubt that anybody is a huge fan of chewing on raw garlic cloves or eating a raw onion like an apple. Studies say that slicing these vegetables and letting them sit for a few minutes before cooking releases the enzyme myrosinase that helps organosulfurs to be more heat resistant. But steaming or maybe a very brief stir-frying is the best way to keep the most of these beneficial compounds available. Steaming broccoli or cauliflower florets for just three to four minutes to be fork-tender and tossing them with some ghee or coconut oil, salt, and pepper makes a wonderful side-dish for your grass-fed steak or wild caught salmon. Don’t overcook your sulfur-rich vegetables if you want to get the best out of them!

SULFUR IN A BOTTLE

Mineral rich soils grow mineral rich food, but unfortunately, soils nowadays are not as rich as they used to be decades ago. So even though our great-grandparents were okay with just consuming what nature gave them, we are now often unable to get enough of the important nutrients like sulfur from real food sources alone. With toxic load all around us that makes our bodies even more nutrient deficient, supplementation is often necessary. Methyl-Sulfonyl-Methane (MSM) is an organic compound that is 34% sulfur, and it is the best formula for supplementation, if you for some reason can’t get enough sulfur in your whole food based diet. This is not unusual, many plant-based sulfur-rich vegetables fall into the FODMAP category, while others are members of the goitrogen family, and both of these food groups might be problematic for certain people with particular health conditions. Raw milk and raw cheese are the richest sources of natural MSM, but conventional dairy is not the best option for optimal health, and lactose intolerance is a very common issue. Also, raw milk is still not legally accessible in all states of the US.

This is where an MSM supplement comes in. Capsules, pills, or fine powder are all good options depending on your preference. MSM contains bioavailable sulfur, which means your body is able to utilize it without any problems, and the best brands of MSM don’t contain any additional ingredients, gluten, sugar, soy, or GMOs. What matters the most is the manufacturing process; many companies use silica and other additives, especially those brands who sell MSM in the form of pills and capsules. Pure, fine powder is always the best choice. OptiMSM is a product manufactured in North America using only the highest quality raw materials, no additives, flow agents, colorings, or flavor enhancers. Purity is confirmed for every batch through independent laboratory testing. Half a teaspoon of this powder dissolved in water twice a day is a perfect maintenance dose. To address inflammation that already exists in the body, you can increase the dose to three teaspoons at a time, twice a day.

MSM supplementation adds enough dietary sulfur into your body to address issues like pain, brain fog, fatigue, skin issues, and toxic load. It works on a cellular level, supporting the cell membrane to allow cells to let more oxygen in and helping to remove toxins from the cells, tissues, and organs, so our body can get rid of these compounds faster. Cellular oxygenation is important for physical and mental performance, repair and recovery, healing, digesting, and even the speed of aging. Having a clearer mind, as well as clearer skin, are both results of optimal levels of sulfur in the body – it affects our body as a whole. So far no studies have shown that high sulfur (or MSM) intake could be toxic to humans, so even if you eat plenty of sulfur-rich vegetables, you can add an MSM supplement into your daily regime without any fear of overdosing; the excess MSM is flushed away from the body via urine.

There is a word of caution though for those who might experience some level of intolerance for sulfur-rich foods. Sulfur mobilizes heavy metals in the body, which means that when consuming sulfur-rich foods and supplements, your body starts releasing these toxins into your bloodstream and you might experience symptoms of acute toxicity. The problem here is not necessarily sulfur itself, but pre-existing toxic load in the body. This might be problematic especially for people with mercury dental fillings or who work in industrial settings that expose them to heavy metals, who already suffer from mercury toxicity. If you already carry a heavy metal burden in your body, you should start with an effective detox regime first (for example using Zeolite), before increasing your sulfur intake. It may be ideal to take Zeolite and MSM both regularly for best results, especially if you have on-going heavy metal exposure at work, or due to amalgam fillings still present in your mouth.

Epsom salt, which is magnesium sulfate, combines the undeniable benefits of both magnesium and sulfur, making an Epsom salt bath a great way to relax your body, reduce stress, improve your sleep, and at the same time detoxify your body and energize your cells. Not everybody is a fan of steamed broccoli or raw onion, but a warm, relaxing bath (or just a foot bath) is something you probably won’t say no to. Even if you already knew that garlic, onion, and cabbage are very healthy for you, now you also know why. Some people, including me, need to know why we should do things, why things work the way they do, and how to make them work even better. If you also have a curious mind and want to have a healthy body, be sure to add sulfur rich foods into your diet, so both your body and mind stay healthy, strong, and resilient. Also check out Martin and Scott’s video discussing more details about MSM supplementation, before you order your supply!