Posted in Brain and Memory, Functional Medicine, Nerves
by martinpytela2019-03-14

Vagus Nerve In Your Body

We now know that the ENS is not just capable of autonomy but also influences the brain. In fact, about 90 per cent of the signals passing along the vagus nerve come not from above, but from the ENS and that is why many consider it as a backup brain centered in our solar plexus. Our gut instincts are not fantasies but real nervous signals that guide much of our lives.

It is our vagus nerve that provides the gateway between the two parts of the autonomic systems. The vagus acts as a bio-informational data bus that routes impulses going in two directions. Since the vagus nerve acts as the central switchboard it should come as no surprise that impaired functioning of this one nerve can lead to so many different conditions and problems. Some neurological diseases actually come up from the gut spreading to the brain via the vagus nerve.

The vagus nerve is known as the “wandering nerve” because it has multiple branches that diverge from two thick stems rooted in the cerebellum and brainstem that wander to the lowest viscera of our abdomen touching our hearts and most major organs along the way. Vagus means “wandering” in Latin. It meanders all the way down, into the belly, spreading fibers to the tongue, pharynx, vocal chords, lungs, heart, stomach, intestines and glands that produce anti-stress enzymes and hormones (like Acetylcholine, Prolactin, Vasopressin, Oxytocin), influencing digestion, metabolism and the relaxation response.

Dr. Peter Levine talks about how the vagus reaches down to the genitals and about healing sexual stress and trauma through opening up the vagus. 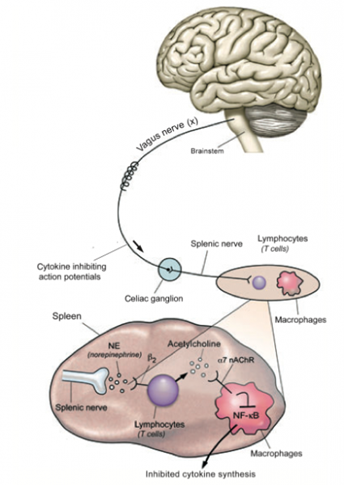 The vagus nerve uses the neurotransmitter, acetylcholine. If our brain cannot communicate with our diaphragm via the release of acetylcholine from the vagus nerve then you will stop breathing. Botox is a toxic substance that has the power to damage the nervous system and shut down the vagus causing death.

The frequently observed rocking and swinging behaviors in autistic individuals may reflect a naturally occurring bio-behavioral strategy to stimulate and regulate a vagal system that is not efficiently functioning.
Dr. Stephen Porges

In this video, Dr. Stephen Porges talks about how vagus disturbances are found in Autistic children. Many practitioners have related the advent of autism to vaccines containing the highly toxic mercury containing substance called Thimerosal. In addition, the public have been highly contaminated with mercury used in dental amalgam, which dentists routinely place only inches from the brain. Moreover, more than 3,000 tons of mercury are put into the atmosphere each year contaminating the entire biosphere of our planet but the government nonsensically worries more about CO2 emissions from coal-fired smokestacks instead of the huge amount of neurotoxic mercury.

The vagus nerve is one of the largest nerve systems in the body. Only the spinal column is bigger. Sometimes this nerve is referred to as cranial nerve X, the 10th cranial nerve. The vagus is used to send a variety of signals throughout the body, but will also transfer signals back to the brain. The vagus nerve is constantly sending updated sensory information about the state of the body’s organs “upstream” to your brain via afferent nerves. In fact, 80-90% of the nerve fibers in the vagus nerve are dedicated to communicating the state of your viscera up to your brain. 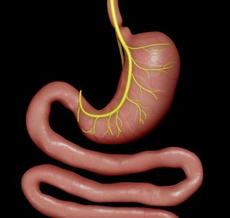 The vagus nerve is used to regulate the heartbeat and the muscle movement necessary to keep you breathing. This nerve also regulates the chemical levels in the digestive system so that the intestines can process food and keep track of what types of nutrients are being gained from the food that is taken in.

Personal Experience: I just recently developed my vagus nerve condition a few months ago even though I now believe it started over a year ago with IBS symptoms. This disorder is absolutely crazy with so many symptoms that do not show up in testing by physicians except when certain symptoms get really bad that it is hard to get the diagnosis.

My journey with vagus nerve disorder started one night when I was at my computer and bent over to move a shoe out of the middle of the floor. I passed out and woke up in a sweat thinking I was having a heart attack. I woke up in kind of a dream state wondering why I was laying down on the ground.

As the weeks passed, more symptoms started to appear. Weird sensations in certain parts of my body, more passing out episodes, shortness of breath and fast heart rates. I went to the doctor and he said all my vitals and internal numbers were healthy but I felt like my body was not working right. I took some nerve calming drugs and that helped for a couple of weeks then they did not work and arrhythmia bouts set in. I would get arrhythmia for 8 to 12 hours and was up all night wondering why my heart was kicking my behind like this when it was running smoothly several weeks ago.

Acupuncturist Jill Blakeway asks, “So how does the vagus nerve get irritated in the first place? Any kind of GI distress can put pressure on the nerve and irritate it, with a hiatal hernia being a frequent culprit. Poor posture along with muscular imbalances can also cause the vagus nerve to misfire, as can excess alcohol or spicy foods. Stress can inflame the nerve, along with fatigue and anxiety.”

Many of the patients who present with symptoms of an irritated vagus nerve have what could be described as a Gall Bladder and Heart Complex in Chinese medicine. This traditionally has been a diagnosis used to describe a collection of symptoms such as esophagitis, hiatal hernia, gastritis, insomnia, palpitations, fearfulness, being easily startled, chest fullness, and a bitter taste in the mouth. In these patients, I have found that accessing the Gall Bladder Divergent Channel can bring almost immediate relief. I usually use the separating and convergent points of the channel GB 30 and GB 1, along with GB 34, LIV 3, PC6, SP 4, LIV 14, and UB 19.

How can patients suffering from an irritated vagus nerve help themselves? Here is the advice I give my patients, with one caveat: Because these symptoms can be caused by so many disorders, I always refer my patients to their MD to rule out more serious pathologies before giving self-help suggestions.

Researchers confirm that daily habits of mindset and behavior along with conscious breathing and yoga can create a positive snowball effect through a feedback loop linked to stimulating your vagus nerve. In order to maintain homeostasis, the central nervous system responds constantly, via neural feedback, to environmental cues. Stressful events disrupt the rhythmic structure of autonomic states, and subsequently, behaviors. Since the vagus plays such an integral role in the regulation of heart rate and heart rate variability it follows that how we breathe when under stress makes all the difference in the world.

Dr. Stephen Porges gives us a great clue to the connection between the sensory nervous system and the very center of our emotional makeup. Darwin (1872) noted in The Expression of Emotions in Man and Animals the importance of the bi-directional neural communication between the heart and the brain via the “pneumogastric” nerve, now known as the vagus nerve. According to Dr. Porges, “Darwin’s statement is important, because it emphasized two points: 1) afferent feedback from the heart to the brain through the vagus was independent of the spinal cord and the sympathetic nervous system, and 2) the vagus played a regulatory role in the expression of emotions. The Darwinian description of the vagus, emphasizing the bi-directional communication between the periphery and central nervous system, assumes that the vagus is part of a feedback system. Implicit in this “vagal system” are motor pathways to change visceral state, sensory pathways to monitor visceral state, and brain structures involved in the evaluation of the input and the regulation of the output.”

We all have an internal assessment mechanism thought to be housed in the amygdala, the hypothalamus or mid-brain which acts as a central intelligence agency challenging every situation, scanning every perception; reacting instantly to the one key question, will it hurt “me?” Will it make “me” feel more or less secure? Will it fulfill or deny me my basic needs? Will it enrich my life or lead to separation and life alienating feelings? The heart is the center that houses our sense of self, the “me” or the ultimate “I.”