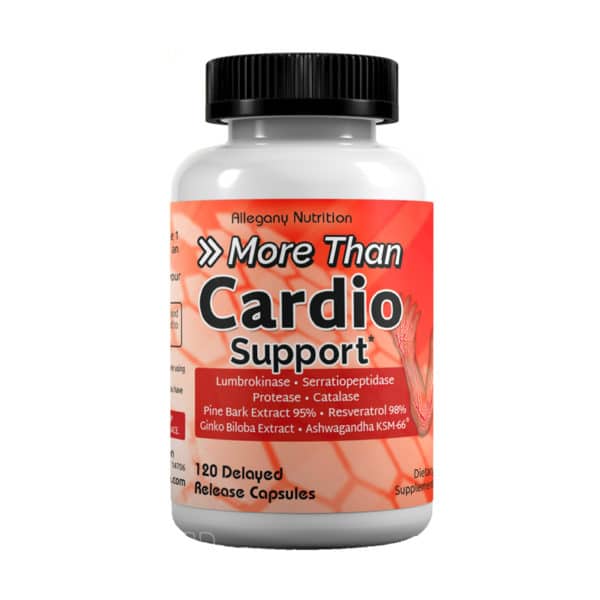 Cardio Support is an all-natural formula. Supports your cardiovascular health. And overall health and vitality too. Anti-inflammatory, Antioxidant  and Blood Viscosity Modulating If your cardiovascular system has imbalances, you can have other issues throughout your body. Seemingly unrelated. Yet a healthy cardiovascular system is crucial for overall health. It supports every tissue, organ, muscle and function. Delayed release capsules ensure nutrients survive your stomach acid and bile. Plant-Derived. 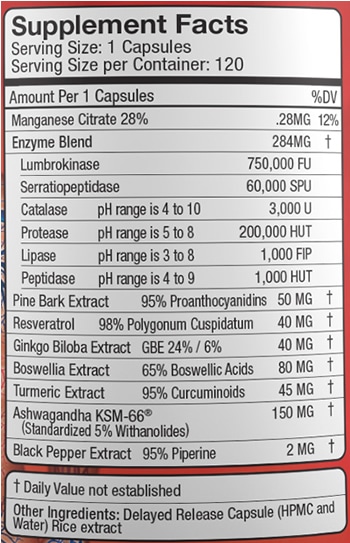 Not a Proprietary Blend

GMP Certified. Manufactured in an Organically Certified Facility, in USA.

Lumbrokinase is a fibrinolytic enzyme, used to support the cardiovascular system. Fibrinolytic enzymes such as lumbrokinase break down fibrin. This is important because excess fibrin has been linked to hardening of the arteries, which is caused by a buildup of plaque on the inner lining of an artery. Plaque is made up of deposits of cholesterol, fatty substances, cellular waste products, calcium, and fibrin. As it builds up in the arteries, the artery walls become thickened and stiff. Research has also shown that lumbrokinase has shown to decrease blood viscosity by reducing fibrinolysis and breaking down blood clots.

Serrapeptase is a proteolytic enzyme (breaks down protein) that has been used for years in Japan and Europe for reducing inflammation and pain due to surgery, trauma, and other inflammatory conditions. It is also believed to be beneficial in treating hardening of the arteries and blood viscosity.

Many researchers believe it helps dissolve hard particles made of protein that cause unwanted side effects from toxins, scar tissue, blood clots and cyst. They feel this is achieved by facilitating immune cell movement and regulating levels of lymphocytes at the site of inflammation.

Pine Bark Extract 95% contains polyphenols. These compounds are believed to be what makes pine bark useful as an antioxidant, antimicrobial and anti-inflammatory. It is thought that these properties have the potential to improve conditions such as blood flow, blood sugar, inflammation, immunity, brain function, skin support and more.

Resveratrol 98% is also a member of a group of plant compounds called polyphenols. Pine Bark Extract and Resveratrol are similar in composition and effects. University studies show that resveratrol is an antioxidant, cardio-protectant, and antimutagenic agent. The resveratrol used in Cardio Support is 98% polyphenols from a plant called Polygonum Cuspidatum.

Ginkgo Biloba Extract Gbe-24/6 out weighs all other Ginkgo Bilobas. It has a minimum of 24% Ginkgo Flavone Glycosides, at least 6% terpene lactones. Ginkgo Biloba is being used in Asia as an herb with powerful antioxidant effects in the brain, retina, and cardiovascular system. Ginkgo Biloba Extract is also believed to enhance mental acuity and memory, increase circulation in the brain and to the extremities, potentially inhibiting the oxidative events leading to the progression of dementia. Many believe it can facilitate the removal and suspension of plaque off of the arterial walls, and inhibit platelet aggregation.

Boswellia Extract is from the boswellia tree, that has been used medicinally in Asia and Africa for centuries. It is being used to help turn off reactions of the immune system that drive up inflammation and swelling. Many people use it for inflammatory conditions, such as auto-immune inflammation, painful joints, inflamed bowels, breathing/lung issues and more.

Turmeric Extract has been used in India to treat painful, inflamed and swollen joints for centuries in Ayurvedic medicine because of its anti-inflammatory properties. Turmeric is also known for it’s antioxidant properties and possible the ability to stimulate the action of other antioxidants in the body. Studies have suggested the use
of turmeric reduces instances of platelet aggregation and potentially reduces the risk of blood clots forming.

Ashwagandha Extract is a medicinal herb that has been used in Asia and Africa to treat a wide variety of health imbalances. Ashwagandha contains chemicals that have been used to help calm the brain, reduce inflammation, lower blood pressure, and alter the immune system.

Extracts from the Ashwagandha plant, especially withanolides, may work in a variety of ways in the body. The herb seems to reduce inflammation in the body, which may protect you from a host of illnesses, including heart disease and cancer. The chemicals in Ashwagandha also seem to reduce blood pressure and create positive changes to the immune system, according to the National Institutes of Health.

Protease and Peptidase are proteolytic enzymes that break down proteins, and cellular waste in the blood stream and throughout the body. These enzymes help the body’s immune system break down toxins, foreign proteins, pathogens, and dead cells. This helps reduce stress off of other body systems.

Lipase is a lipolytic enzyme that breaks down fat. Poor fat and lipid metabolism can lead to cardiovascular imbalances because fats are a major source of fuel for the heart and brain. Lipase may help control triglyceride and LDL cholesterol levels.

Catalase enzymes have been used to protect our cells, counteracting and balancing the continual production of hydrogen peroxide.

In addition to acting as a super antioxidant, catalase also has the ability to use hydrogen peroxide to oxidize toxins including methanol, ethanol, formic acid, formaldehyde, and nitrite. This type of dual activity makes it a crucial cellular enzyme and antioxidant.

Take 1 capsule 2 times daily, preferably on empty stomach. Or as directed by your healthcare provider.

Caution:
If you are under a physician’s care, or taking other medication, consult with your healthcare professional before using this product. Consult with your doctor if you are pregnant, lactating, or have an existing ulcer. Do not use if you have a blood coagulation disorder

Cardio Support is antioxidant, anti-inflammatory and blood viscosity modulating. For your cardiovascular and overall health and vitality. 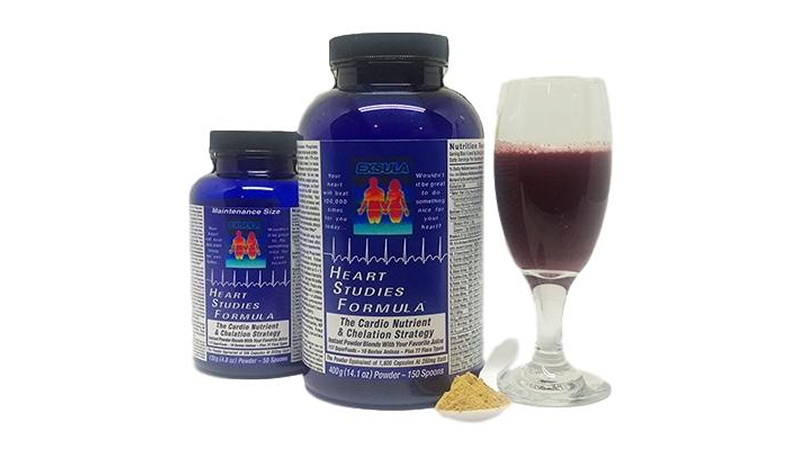 Heart and circulatory disease are silent killers stalking every person you know and love. 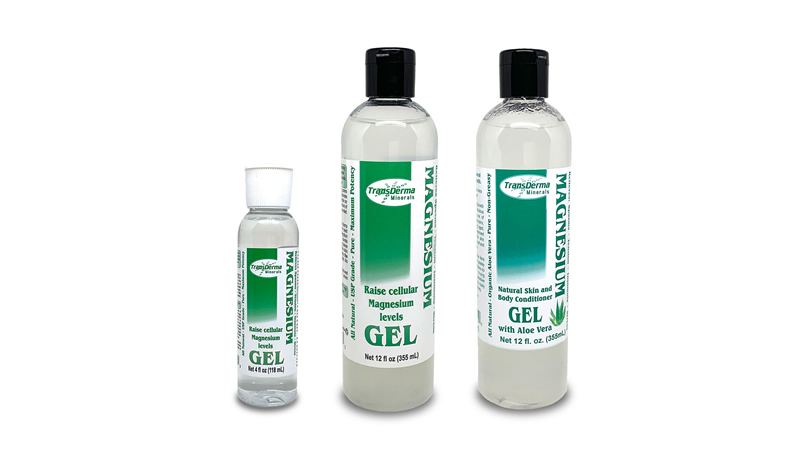 Magnesium and Your Heart Health

In a recent study of more than 230 people with frequent arrhythmias, the likelihood of these abnormal rhythms dropped significantly within three weeks after the participants increased the amount of magnesium and potassium in their diets. 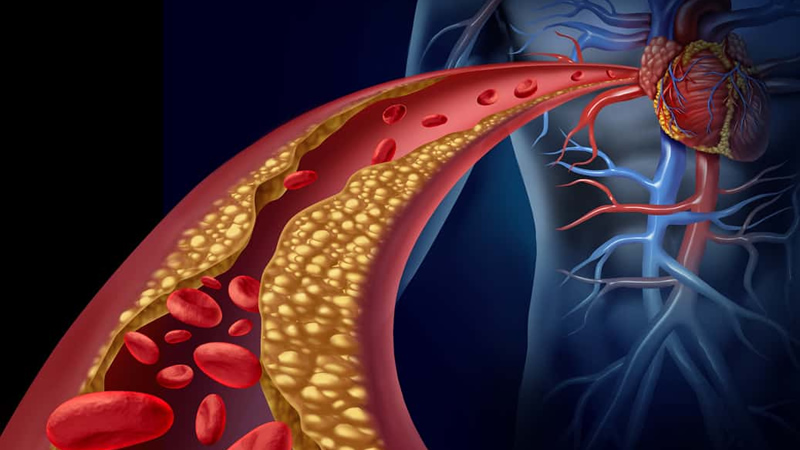 The first symptoms of vitamin K deficiency can be heart attack or a fractured osteoporotic bone. 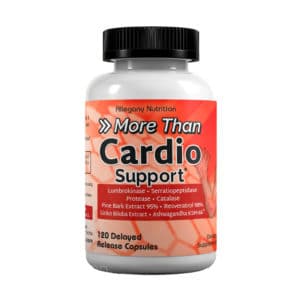