Flu Shot: The Pro and The Con of It 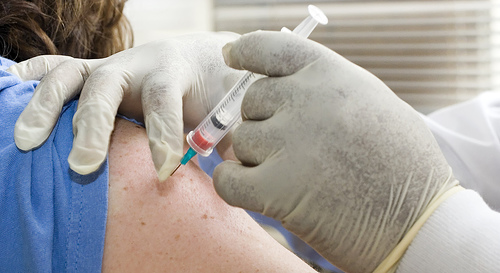 Apparently we are in the midst of a flu epidemic. Hospital emergency rooms are overflowing. Entire wings of institutional wards are being closed off to public access to minimize contagion. More than 19,000 cases of influenza have been reported in New York for this season, almost four times the past years total. They have resulted in 2,884 hospitalizations and the deaths of two children. And how are they trying to solve this problem? Gov. Andrew Cuomo issued an executive order that allows pharmacists to give flu shots to people between six months and 18 years of age, suspending rules that limit them to immunizing only adults. Heres the full article Gov. Andrew Cuomo on Saturday declared a public health emergency in New York due to increasing severity of the flu season.

How long does it take for your immune system to develop the protective mechanism? The NHS website says it takes two weeks. By the time protection develops, the current epidemic will have already run its course. And the shot will be effective only if the manufacturer has included the specific strain. So before you take the shot, ask if the H3N1 is one of the strains covered in the vaccine you are about to use.

So far the statistics are not all that great: there is a 60% chance that they correctly predict this years virus mix. For the first few days after the shot you will be actually more vulnerable, because your immune system will be busy dealing with the effects of the shot. When the bird flu epidemic was under way a couple of years ago, people who took the flu shot had a greater chance of falling ill. Additionally, older people who took the flu shot 5 years in a row had a greater chance of being diagnosed with Alzheimers. What a price to pay for a bit of inconvenience!

Dr. Russell Blaylock is saying: Here’s the bottom line: The vast number of people who get the flu vaccine aren’t going to get any benefit, but they get all of the risks and complications. Have you asked yourself the obvious question: Why is the flu epidemic starting just 3 weeks after a major holiday? What did we do? Ate too much, drank lots, stayed up late all of which lowers immune defenses, and also raises the overall acidity of the bodily fluids. Let me tell you why that matters: with lower pH (rising acidity) your body fluids lose their capacity to carry oxygen, which then creates the terrain for viral infections to thrive. Simple, direct connection.

There are additional things you can do: your defenses are strengthened by iodine that supports your thyroid (the Shield gland, as it is called in other languages), viruses are stripped off their protective coating by lecithin, and your overall function is supported by medicinal mushrooms. I would love to hear from you how are you dealing with the flu? Are you in bed sick, or are you healthy and wondering about all the fuss?