Feeling Like Killing Someone Could Be Caused By Food 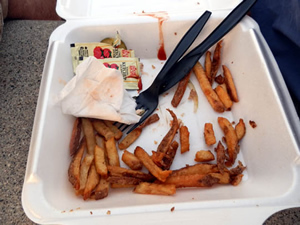 One of the fastest ways to damage your lipid balance is to eat fried food. When you heat oils, you cause them to oxidize and your body has to deal with their cancer- and anger- generating effects.

You might be due for a dietary change if you have an overpowering desire to murder someone. According to ongoing research from the National Institutes of Health (NIH) and Oxford University, omega-3 fatty acids may help the brain suppress murderous impulses. As detailed in a New York Times article, a 2001 NIH study found an association between high omega-3 intake and lower murder rates.

More recently, Oxford scientists enrolled about 230 British prisoners who were given an omega-3 supplement or placebo. Results showed a significant drop in assaults and other antisocial behaviors in the omega-3 group, but little change in the placebo group. Further Oxford research is now underway, and similar trials are being conducted in Norway and Holland.

According to the Times, a study in Finland revealed that prisoners with a record of violent crimes tended to have low levels of omega-3 fatty acids. In a follow up study, symptoms of anger were cut in half when omega-3 supplements were given to subjects with a history of substance abuse.The Finland team theorizes that omega-3s prompt neuron growth in the frontal cortex, the area of the brain that manages impulsive behavior.

I believe that omega-3 fatty acids are important in several ways. Some examples include weight management, immune system functioning, and overall levels of inflammation in the body. There are several great articles on our website that explain fats in depth. The most effective solutions are not the fish oils, but coconut oil, olive oil and butter. Yes, butter.Can you believe its butter? And not its substitute margarine!