Did You Know There Was a Supplement for Joy?

How many times have you read about St. Johns Wort for the treatment of depression? I disagree with that classification. I believe that this herb actually raises your level of Joy! German medical practitioners use it regularly as an effective alternative to addictive, risky antidepressant drugs. In light of the recent antidepressant/suicide scandals, we all need to promote substitutes for prescription blues-fighters. Reuters Health reported that a high-grade extract of St. Johns Wort is more effective at treating moderate to severe depression than Paxil, one of the most commonly prescribed antidepressant drugs.

According to the article, researchers compared the treatment of more than 250 patients between 18 and 70 years of age for six weeks. At the end of the study, over 50% of the patients in the St. Johns Wort extract group reported improvement in their depression, while only 32% of those in the Paxil group reported any benefits at all.

And would you also believe that the side effects experienced by the St. Johns Wort group were much fewer and farther between than in the drug group? This finding only confirms what other studies have shown before: St. Johns Wort is a safe and effective mood elevator. Its also one of the few herbal treatments that you can find in every grocery store medicine shelf.

But there is a problem: Not all St. Johns Wort supplements work. There is a wide range in effectiveness of all herb supplements because of differences in the soil, nutrients, weather, and very importantly in the absorbability of the active ingredients. Unfortunately, there are no uniform standards of freshness, quality, bioavailability, or even recommended effective dosages in the supplement industry. You can get anything from utterly useless to extremely effective medicine, still at a fraction of the cost of the addictive pharmaceutical drugs.How do you find the good ones? Try ours and I promise you will not have to go looking any farther. 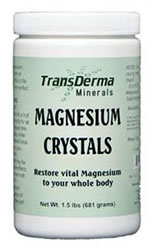 You might remember that soaking your feet in Transdermal Magnesium was documented to elevate the tissue levels of DHEA. It could not hurt to add some St. Johns Wort Drops, would it?

Look at this news about another drugless depression therapy
According to a new study conducted by a branch of the National Institute of Mental Health, the hormone precursor DHEA (dihydroepiandrosterone) proved effective at combating so-called mid-life onset depression in roughly 50% of cases, which apparently is better than the Paxil example above.

Your body is supposed to produce more of DHEA than all other hormones combined. Production typically peaks between 20 and 30 years of age, however beyond that, typical DHEA levels decline dramatically. This could be the first time DHEA is shown to be effective against depression. Previous research has linked the hormone to prevention and reversal of heart disease, arthritis, Chronic Fatigue Syndrome, diabetes, cancer, obesity, and other afflictions associated with aging. You can buy DHEA as an oral supplement, but you get more sustained natural effects from Magnesium supplementation.