The common, synthetic form of Vitamin K as found in some supplements and as injected into newborns must be taken with care to avoid overdose reactions. The natural forms of Vitamins K-1 and K-2 (as in Exsula Superfoods) are regarded as safe forms, resources available just as the body needs them, and with any extra being easily eliminated rather than accumulating at too high of a level. 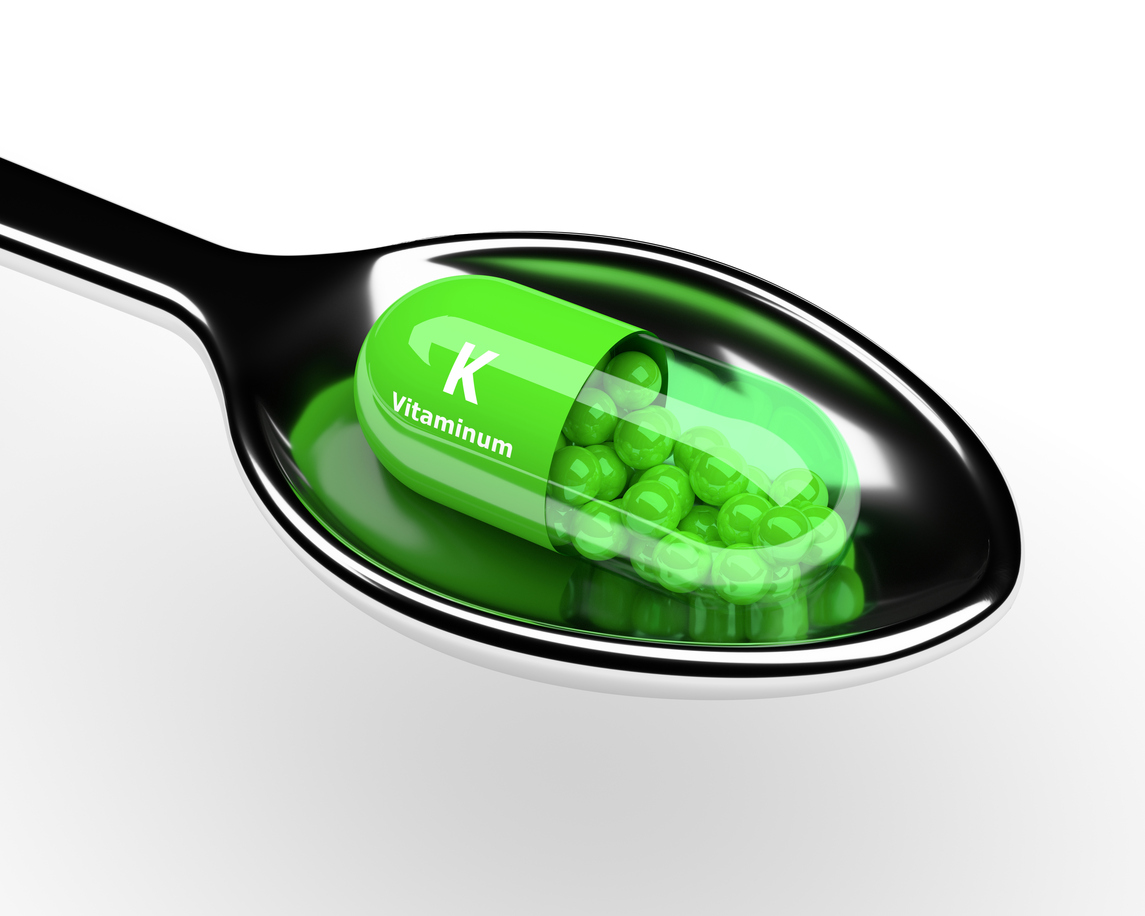 The Pinnacle of Bone and Heart Health!

Vitamin K is absolutely essential to build strong bones – and it is proven to prevent heart disease. For several years, compelling evidence has shown that most people don’t get enough vitamin K to protect their health through the foods they eat. Green leafy vegetables supply almost half of the vitamin K for the majority of Americans. Most foods considered rich in vitamin K have shown to have less vitamin K than previously thought. Despite this vital information, the majority of multivitamins don’t contain any vitamin K at all – and those that do don’t contain enough.

Recent research supporting vitamin K’s usefulness against osteoporosis and heart disease is now becoming too abundant to overlook. Still, few health conscious consumers understand the importance of supplementing vitamin K. For this reason, I now offer the most potent disease fighting form of this vitamin available – Vitamin K2 – in supplemental form. Vitamin K2 is a newly available extract of natto that provides the highly bioavailable form of vitamin K2 as menaquinone MK-7. This exclusive patented formula of Vitamin K2 is only available on-line at Mercola.com. You won’t find it commercially anywhere else on the Internet in the US.

Vastly superior to other forms of vitamin K, nontoxic vitamin K2 offers many critical health-promoting advantages, including: a.. Better absorption rate – unlike vitamin K1, vitamin K2 does not concentrate in the liver. The body stores only limited amounts of vitamin K in the liver, so vitamin rich foods must be consumed regularly, and with only 10% absorption of vitamin K1 from vegetables – you are receiving only pennies on the dollars. Vitamin K2 works primarily outside of the liver in the bone and blood vessels. This uniquely branded powerful form of vitamin K2 is poised to revolutionize the market for bone health and heart health supplements.

Vitamin K is unique because it acts like a hormone, but shows no toxicity. With research now focusing on its potential effects on the brain, liver and pancreas, vitamin K is one of the most promising vitamins of our time. In 1929, Danish scientist, Dr. Henrik Dam discovered vitamin K. The “K” is for Koagulation – essential for proper blood clotting. Sometimes referred to as “the forgotten vitamin,” the many other benefits of vitamin K are often overlooked. Vitamin K plays a crucial role in many bodily functions. It may be a key anti-aging vitamin – it’s a stronger antioxidant than vitamin E or coenzyme Q10. Japanese researchers found that vitamin K deficiency can have effects similar to diabetes. And now, scientists are even looking at vitamin K to be the future of treating certain kinds of cancer and Alzheimer’s disease.

Considering the importance of this vitamin, it’s reasonable to question if you’re getting enough. Vitamin K exists in three forms, K1, K2, and K3. All are fat-soluble. This is important because dietary fat is necessary for the absorption of the vitamin -meaning that in order for your body to absorb it effectively, you need to eat some fat along with it. Vitamin K1, or phylloquinone, is found naturally in plants. Vitamin K2, also called menaquinone, is made by the bacteria that line the gastrointestinal tract. Vitamin K3, or menadione (that I do not recommend) is manmade and is generally regarded as toxic because it generates free radicals. It’s important to note that toxicity has occurred in infants given synthetic vitamin K3 by injection.

The richest natural source of vitamin K2 is derived from an ancient Japanese medicinal food called Natto. Natto is made from fermented soybeans and significant amounts of vitamin K2 are produced during the fermentation process. Fermented foods, such as natto, typically have the highest concentration of vitamin K found in the human diet and can provide several milligrams of vitamin K2 on a daily basis. This level far exceeds the amount found in dark green vegetables. Since most Americans do not eat traditionally fermented foods like natto, adding them to your diet is a must as the health benefits are tremendous. It has also been reported that the sticky part of natto contains polyglutamin acid – an acid that aids the absorption of calcium from the intestine.

The incidence of osteoporosis continues to increase dramatically, affecting an estimated 10 million Americans over the age of 50 years old – with 32.9 million afflicted with low bone mass, placing them at an increased risk for developing this condition. Additionally, close to 1.2 million bone fractures in the United States each year are related to osteoporosis. For early prevention of postmenopausal and age-related bone loss, nutritional interventions should be the first choice as they are the least toxic and least expensive option. While other nutrients are important for maintaining high bone densities, there is increasing evidence indicating a significant role for vitamin K in bone metabolism and osteoporosis.

It is very rare where a drug-based solution to a chronic degenerative health condition is the answer. However, many doctors prescribe oral drugs called bisphosphonates to treat osteoporosis. Bisphosphonates are a family of non-hormonal drugs used to prevent and treat osteoporosis. There are many bisphosphonates currently in clinical use, including alendronate (Fosamax) and etidronate (Didronel). Unfortunately, most doctors don’t have any clue that these biphosphanate drugs are toxic poisons that contain the same type of chemicals that are used to remove soap scum from your bathtub. These drugs can have drawbacks including gastrointestinal intolerance and poor absorption by the gastrointestinal tract.

They work by killing osteoclasts in the bone that are responsible for remodeling the bone. The theory is that if you can prevent bone loss you will have stronger bone. Unfortunately, the theory doesn’t hold up. The osteoclasts are metabolically poisoned (killed) and the bone does become denser. The denser bone does not translate to stronger bone. Although the bone is denser it is actually more brittle and more susceptible to fracture. While biphosphonate drugs work through osteoclasts that remove bone, vitamin K has been linked to osteoblasts, the cells that generate or “lay down” bone and produce a specific protein known as osteocalcin.

It was found that the protein osteocalcin acts as a kind of glue that helps to incorporate calcium into the bones, and vitamin K2 is necessary in order to produce this protein. Research shows that vitamin K regulates calcium and keeps it in the bones and out of arteries – stopping heart attack and osteoporosis at the same time. Vitamin K seems to do the impossible accommodating the needs of both bones and arteries. Vitamin K works through an amino acid called “Gla,” which stands for gamma carboxyglutamic acid. Gla is part of a certain kind of protein that controls calcium. Researchers believe there are at least one hundred of these proteins scattered throughout the body. Vitamin K is the only vitamin that makes these proteins work.

Vitamin K achieves a process on the proteins called “carboxylation.” Carboxylation gives the proteins claws so they can hold onto calcium. Once the protein grabs onto calcium – it can be moved. Proteins that don’t get enough vitamin K can’t hold on to calcium. Without a functioning protein to control it, calcium drifts out of bone and into arteries and other soft tissue. Vitamin K2 gently redirects the “lost” calcium back to the bone bank. One ground breaking study observed the change in circulating vitamin K2 (MK-7) and Gla osteocalcin concentrations in normal individuals with the intake of natto. Volunteers were divided into three groups. One group received regular natto, while the other two groups were given natto reinforced with two varying concentrations of MK-7.

1.. 10 times more absorption than other Vitamin K forms, not bound to fiber (like Vitamin K1)
2.. Longer residual time in the human body
3.. Works outside the liver (extrahepatic) to control calcium deposits in blood vessels and prevent bone loss and ten other biochemical’s pathways with unknown therapeutic application
4.. MK-7 may have less interactions with medicines such as Coumadin
5.. MK-7 occurs with good bacteria which can create probiotics in the gastrointestinal system
6.. Most fat-soluble form of Vitamin K, greater than Vitamin K1 and MK-4
7.. Non-animal sourced and suitable for vegetarians/vegans
8.. Non-GMO manufacturing and ingredients

To experience benefits for bone and vascular health, 100 micrograms per day of supplemental Vitamin K2 is suggested.

CAUTION: Vitamin K2 may counteract the effects of anticoagulation therapy, and therefore is not recommended for patients on blood-thinning medications. To prevent potential interference with oral anticoagulants such as coumadin (warfarin), you should not exceed a daily dose of 100 micrograms. Those who have experienced stroke, cardiac arrest, and those prone to blood clotting should not take Vitamin K2 without first consulting their physician. Pregnant and nursing mothers should avoid Vitamin K supplemental intakes higher than the RDA (65 mcg) unless specifically recommended and monitored by their physician.