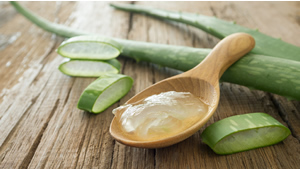 Aloe, native to Africa, is also known as “lily of the desert”, the “plant of immortality”, and the “medicine plant”. The name was derived from the Arabic alloeh meaning “bitter” because of the bitter liquid found in the leaves. In 1500 B.C. Egyptians recorded use of the herbal plant in treating burns, infections and parasites.

There are over 500 species of aloe growing in climates worldwide. Ancient Greeks, Arabs and Spaniards have used the plant throughout the millennia. African hunters still rub the gel on their bodies to reduce perspiration and their scent.

Extensive research since the 1930’s has shown that the clear gel has a dramatic ability to heal wounds, ulcers and burns by putting a protective coating on the affected areas and speeding up the healing rate.

The plant is about 96% water. The rest of it contains active ingredients including essential oil, amino acids, minerals, vitamins, enzymes and glycoproteins. Modern healers have used it since the 1930’s. Many liquid health treatments are made, some combining aloe juice with other plants and herbs. The juice is soothing to digestive tract irritations, such as colitis and peptic ulcers.

As a food supplement, aloe is said to facilitate digestion, aid in blood and lymphatic circulation, as well as kidney, liver and gall bladder functions.

Aloe contains at least three anti-inflammatory fatty acids that are helpful for the stomach, small intestine and colon. It naturally alkalizes digestive juices to prevent overacidity – a common cause of indigestion. It helps cleanse the digestive tract by exerting a soothing, balancing effect.

A newly discovered compound in aloe, acemannan, is currently being studied for its ability to strengthen the bodies natural resistance. Studies have shown acemannan to boost T-lymphocyte cells that aid the immune system.

Those wise to the ways of aloe healing keep this plant in the kitchen. When the leaf is broken, its gel is placed on burns to relieve pain and prevent blisters. Aloe may reduce inflammation, decrease swelling and redness, and accelerate wound healing.

Aloe can aid in keeping the skin supple, and has been used in the control of acne and eczema. It can relieve itching due to insect bites and allergies. Aloe’s healing power come from increasing the availability of oxygen to the skin, and by increasing the synthesis and strength of tissue.

There is a wide range of research from all over the world based upon different species of Aloe. As far as is possible the table below describes the constituents found in Aloe Barbadensis Miller (Aloe vera) with their properties and their inferred activities. The aloe constituents are derived from the aloe leaf which consists of three primary sections: the rind (photosynthesis) with sap contained in the pericyclic transport tubules (xylem and phloem), the mucilage (container) layer and the parenchyma or gel fillet (storage) layer.

The relative quantities of the aloe constituents may be quite small (the total solid fraction varies from 0.5 to 1.5%), but most researchers claim that the effects that are observed may be due to the synergistic actions of the 75 known ingredients. The table below lists the constituents in alphabetical order. The aloe constituent list represents a consensus view of published work and may not be complete. The properties and the associated activities reported in the table have been constructed using the references cited below.

The Essential Aloe Vera, The Actions And The Evidence, by Dr Peter Atherton, 2nd Edition, 1997