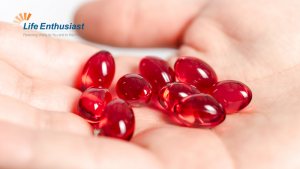 Astaxanthin is a Powerful Antioxidant

How does Astaxanthin compare to other antioxidants?

All antioxidants have the same action.  They neutralize harmful ROS by quenching or scavenging action. The potency determined by in-vitro tests can indicate the antioxidant capacity. When compared properly, antioxidant potency can vary tremendously. For example: Astaxanthin Singlet oxygen quenching activity in a lipid and water soluble system is (Nishida et al., 2007)

How does Astaxanthin work?

Astaxanthin is a lipid soluble carotenoid antioxidant. Upon ingestion astaxanthin can be found in all organs of the body. At the cellular level astaxanthin accumulates in the membranes of cells and in the membranes of mitochondria and many others. Astaxanthin has a unique structure that enables the molecule to span the double layer membrane and consequently, exposes itself both to the interior as well as the exterior of the cell. By localizing itself in the membranes, astaxanthin protects membrane components like proteins and unsaturated fatty acids from ROS mediated oxidation. Furthermore, this high antioxidant capacity can inhibit the activation of the proinflammatory response via the NF-kB dependent pathway.

Irreplaceable Molecule for any Anti-Aging Regimen

When a shrimp is cooked, it suddenly turns red. The red color is Astaxanthin- a carotenoid xanthophyll that tints salmon, crab, krill and lobster with vivid reddish pigmentation. The rising popularity of astaxanthin as anti-aging nutraceutical supplementation and cosmeceutical application has been endorsed by acclaimed researchers, health specialists and professional athletes worldwide as well as being featured in many nutritional regimens in popular mass media.

Purest antioxidant molecule because it has no proxidant activity even when subjected to enormous amount of stress from environmental factors and free radicals.

Provides superior mitochondria protection as research shows that is 1,000 times more effectively than Vitamin E against lipid peroxidation in the mitochondria.

Powerful Anti-Inflammatory – Several in-vitro and in-vivo studies shows that ASX strongly suppressed nuclear translocation of NFkB inflammatory cascade, which are the leading cause of most degenerative diseases.

The Global Burden of Cardiovascular Disease

Cardiovascular diseases (CVDs), including heart attack and stroke, are the leading cause of death globally. According to WHO, 17.3 million people died from CVDs in 20081. Of those, an estimated 7.3 million deaths were due to coronary heart disease and 6.2 million were due to stroke.

Behavioral risk factors such as smoking, unhealthy diet, and alcohol abuse are believed to be responsible for 80% of coronary heart disease and cerebrovascular disease2.

Moreover, these behaviors result in increased body weight, elevated blood pressure, dyslipidemia, insulin resistance, and hyperglycemia. These effects are associated with the development of atherosclerosis, which is the main underlying cause of heart attack, stroke, and peripheral vascular disease.

Oxidative stress and inflammation are widely recognized as contributing factors to atherosclerotic CVDs. The use of antioxidants such vitamin E, C, and beta-carotene as preventive therapies for CVDs has yielded mixed results. This is why astaxanthin, which is a much stronger antioxidant that also exhibits anti-inflammatory properties, is now being investigated as a promising compound for protecting against atherosclerotic CVDs. Studies have shown that natural astaxanthin reduces oxidative stress and inflammation, improves lipid profiles, promotes better blood flow in capillaries, and lowers blood pressure in hypertensive individuals. Importantly, no adverse effects have been reported in these studies.

When wrinkles or skin problems arise, most women reach for cosmetic products, like creams, gels, ointments, and makeup. Applying these products to the surface of the skin may temporarily conceal the problem, but their effect is superficial and doesn’t tackle the underlying causes. The skin is an extremely complex organ, consisting of multiple layers that each have unique and important functions. For a product to truly improve the skin’s health and beauty, it must provide protection and support to all layers of the skin.

Our skin is under constant attack from free radicals produced by UV rays, pollution, stress, and poor nutrition. The damage caused by free radicals is a major cause of skin aging and problems such as wrinkles and age spots. This free radical damage affects all layers of the skin, from the visible surface to the delicate deep layers where new skin is formed.

Natural algae astaxanthin is a powerful antioxidant with potent anti-inflammatory effects. Its unique molecular structure allows it to reside in the cell membrane and to protect the inside and outside of cells from free radical attack. Research shows that astaxanthin taken as an oral supplement is active in each of the skin’s layer, provides protection from UV damage, shrinks wrinkles, and makes age spots smaller. Natural algae astaxanthin can help your reveal your skin’s natural beauty from the inside out.

More than ever, people nowadays enjoy a wide variety of sport activities to maintain a healthy body weight and circulatory system. From lifestyle changers to elite athletes, fastidious training may not always bring desired results. Some may experience performance slumps or a decline of endurance. Specialized nutritional support is recognized to support physical performance in many ways. From isotonic drinks to protein and carbohydrates, natural astaxanthin nutritionally completes the demands of a physically active lifestyle.

During our physical activity, we require energy to move our body. And all energy we need are generated by mitochondrial cells, often referred to as the “power stations of the cell”, which provide as much as 95% of our body’s pure energy (primarily by the burning of muscle glycogen and fatty acids). Unfortunately, a portion of this energy produces highly reactive and damaging reactive oxygen species (ROS) which is the one of major factors to deteriorate our body. ROS leads the cause of cell damage by peroxidation of the cell membrane components, and oxidation of DNA and proteins. What we found from numerous studies and research, ROS also caused the inflammation of muscle tiredness and soreness. Improving your muscle performance and increasing its endurance are required to protect your physical condition from ROS damaging. In recent years, much attention was paid to the suppression of oxidative reaction by food with antioxidant. Vitamin C and vitamin E have been widely used as popular elements against oxidative stress now.

The most powerful antioxidant in the carotenoid group, Astaxanthin, provides a variety of benefits to the muscle function such as improvement of physical performance, lower muscle damage and the quality of blood.

Astaxanthin for Dyspepsia and Helicobacter pylori

Dyspepsia is the general term given to a variety of digestive problems localized in the upper abdominal region. Typical symptoms for example include stomach pain, gas, acid-reflux or bloating. Dyspepsia is like the stomach version of the irritable bowel syndrome and its symptoms may appear at any age or to any gender. The medical approach to dyspepsia involves looking for treatable causes and addressing them if identified. Failing that, doctors suggest treatments by trial-and-error. The problem associated with this non-standardized approach involves drugs that may not work, may cause side effects and exacerbate the patient’s condition brought on by stressful attempts to cure symptoms. To understand the benefits of astaxanthin in dyspepsia, it is necessary to categorize specific types; most common forms are either non-ulcer dyspepsia or gastric dyspepsia. Non-ulcer dyspepsia problems usually do not have an identifiable cause, but fortunately, for most cases it is non-disease related and therefore temporary. On the other hand, gastric type dyspepsia is more severe and linked to identifiable causes. For example, the bacterial infection of Helicobacter pylori is a commonly known cause. Pathological symptoms of H. pylori infection include high levels of oxidative stress and inflammation in the stomach lining and symptoms like gastric pain and acid reflux., H. pylori can contribute to mild and severe kinds of symptoms, but on the other hand, people who are H. pylori positive can remain asymptomatic whereas others may develop into clinical problems. It is still unclear what triggers the severe form of infection and how the bacteria is passed on, but scientists suggested using strong antioxidants like astaxanthin for therapy and better long term protection.

Epidemiological and clinical data suggest that dietary carotenoids such as astaxanthin may protect against cardiovascular disease (CVD) which includes hypertension. This condition is associated with blood vessel dysfunction, altered contractility and tone; mediated by relaxant (nitric oxide NO; prostacyclin) and constrictor factors (thromboxane; endothelin) in the blood. Furthermore, blood flow properties serve an important role in the pathological complications seen in atherosclerosis and coronary heart disease. Research presented here suggests that astaxanthin may be useful as part of an antioxidant therapy to alleviate hypertension.

17. Satoh A et al., Effects of the lntake of astaxanthin on the reduction of skin darkling induced by uv irradiation in adult women. Oyo Yakuri Pharmacometrics. 2011;80(1/2):7-11.