A Consumer’s Guide to Avoiding Drug-Induced Death or Illness 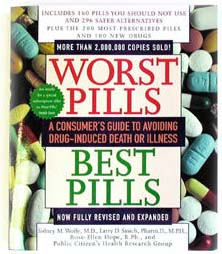 It is no longer a secret that adverse drug reactions can be dangerous or even fatal, or that doctors often prescribe two relatively safe drugs – which many cause life threatening interaction if taken together. This is the book that tells you what other pill books won’t about your medication!

It includes 160 pills you should not use and 296 safer alternatives, plus the 200 most-prescribed pills, and 100 new drugs.

Consumer advocate Sydney M. Wolfe, M.D. director of Public Citizen’s Health Research Group, has thoroughly revised and updated this accessible, indispensable bestseller that alerts you to the potential risks of hundreds of medications available today. Worst Pills, Best Pills gives you the information you need to become actively involved in caring your for yourself!

ADVERSE DRUG REACTIONS: How Serious Is the Problem and How Often and Why Does It Occur?

Although some adverse drug reactions are not very serious, others cause the death, hospitalization, or serious injury of` more than 2 million people in the United states each year, including more than 100,000 fatalities. In fact, adverse drug reactions are one of the leading causes of death in the United States.’ Most of the time, these dangerous events could and should have been avoided. Even the less drastic reactions, such as change in mood, loss of appetite, and nausea, may seriously diminish the quality of life.

Adverse Reactions to Drugs Cause Hospitalization of 1.5 Million Americans Each Year

Adverse Reactions Occur to 770,000 People a Year During Hospitalization

In addition to the 1.5 million people a year who are admitted to the hospital because of adverse drug reactions, an additional three quarters of a million people a year develop an adverse reaction after they are hospitalized. According to national projection, based on a study involving adverse drug reactions developing in almost 800,000 patients a year, more than 2,000 patients a day, suffer an adverse event caused by drugs once they are admitted. Many of the reactions in the patients studied were serious, even life-threatening, and included cardiac arrhythmias, kidney failure, bleeding, and dangerously low blood pressure. People with these adverse reactions had an almost twofold higher risk of death compared to other otherwise comparable hospitalized patients who did not have a drug reaction. Most importantly, according to the researchers, almost 50% of these adverse reactions were preventable. Among the kinds of preventable problems were adverse interactions between drugs that should not have been prescribed together (hundreds of these are listed in Chapter 3 of this book), known allergies to drugs that had not been asked about before the patients got a prescription, and excessively high doses of drugs prescribed without considering the patient’s weight and kidney functions.

Dangerous Prescribing Outside the Hospital for 6.6 Million Older Adults a Year

Based on the Do Not Use principle we have advocated concerning certain drugs for more than ten years in our Worst Pills, Best Pills books and monthly newsletter, several published studies have examined the extent to which people are prescribed drugs that are contraindicated because there are safer alternatives. One study, whose authors stated that “Worst Pills, Best Pills stimulated this research,” found that almost one out of four older adults living at home-6.6 million people a year were prescribed a “potentially inappropriate” drug or drugs, placing them at risk of such adverse drug effects as mental impairment and sedation, even though the study only examined the use of a relatively short list of needlessly dangerous drugs (fewer than the number listed as Do Not Use drugs in this book).7

Other researchers looked not only at people for whom a contraindicated drug was prescribed, but also at prescriptions for older people involving two other categories: questionable combinations of drugs and excessive treatment duration. The authors categorized all of this as “high-risk prescribing” and limited their analysis to just the three classes of drugs most commonly causing drug-related illness: cardiovascular drugs, psychotropic drugs (ones that act on the mind) such as tranquilizers and antidepressants, and anti-inflammatory drugs. They found that 52.6% of all people 65 or older were given one or more prescriptions for a high-risk drug.8 Thus, more than twice as many older adults were the victims of high-risk prescribing when these two additional categories were added.

How Extensive Is the Problem of Specific Adverse Drag Reactions?

The following national estimates are based on well-conducted studies, mainly in the United States:

– Each year, in hospitals alone, there are 28,000 cases of life-threatening heart toxicity from adverse reactions to digoxin, the most commonly used form of digitalis in older adults.9 Since as many as 40% or more of these people are using this drug unnecessarily, many of these injuries are preventable.

– Each year, more than 9.6 million adverse drug reactions occur in older Americans. The referenced study found that 37% of these adverse reactions were not reported to the doctor, presumably because patients did not realize they were due to the drug. This is not too surprising considering that most doctors admitted they did not explain possible adverse effects to their patients. 11

– At least 16,000 injuries from auto crashes each year involving older drivers are attributable to the use of psychoactive drugs, specifically benzodiazepines and tricyclic antidepressants[12] (Psychoactive drugs are those that affect the mind or behavior.)

Approximately 163,000 older Americans suffer from serious mental impairment (memory loss, dementia) either caused or worsened by drugs. 15 In a study in the state of Washington, in 46% of the patients with drug-induced mental impairment, the problem was caused by minor tranquilizers or sleeping pills; in 14%, by high blood pressure drugs; and in 11%, by antipsychotic drugs.

* Drug-induced tardive dyskinesia has developed in 73,000 older adults; this condition is the most serious and common adverse reaction to antipsychotic drugs, and it is often irreversible. Tardive dyskinesia is characterized by involuntary movements of the lips, tongue, and sometimes the fingers, toes, and trunk. Since most of the older people taking these drugs were not actually psychotic, they have a serious side effect from antipsychotic drugs prescribed without justification.17

– Drug-induced parkinsonism has developed in 61,000 older adults due to the use of antipsychotic drugs such as Haldol, Thorazine, Mellaril, Stelazine, and Prolixin. There are also other parkinsonism-inducing drugs, such as Reglan, Compazine, and Phenergan, prescribed for gastrointestinal problems.18 As mentioned above, most (about 80%) of older adults receiving antipsychotic drugs do not have schizophrenia or other conditions that justify the use of such powerful drugs.

A serious problem exists because doctors and patients do not realize that practically any symptom in older adults and in many younger adults can be caused or worsened by drugs.l9 Some doctors and patients assume that what are actually adverse drug reactions are simply signs of aging. As a result, many serious adverse reactions are entirely overlooked or not recognized until they have caused significant harm.

Later in this chapter we will list the most common drug-induced adverse effects along with the drugs that can cause them. In the box below are some of the symptoms which, although they are frequently caused by drugs, are the kinds of problems that you or many doctors might first attribute simply to “growing old,” or “getting nervous” instead of to a drug,

The drugs responsible for the most serious adverse reactions in older adults are tranquilizers, sleeping pills, and other mind-affecting drugs; cardiovascular drugs such as high blood pressure drugs, digoxin, and drugs for abnormal heart rhythms;20 and drugs for treating intestinal problems.

Louise went to her family doctor for allergies and was prescribed Seldane, the non-sedating antihistamine that was widely promoted and prescribed (until it was recently taken off the market). When she later got a fungal infection of her toenails, she went to a dermatologist who prescribed an antifungal drug, ketoconazole (NIZORAL). The dermatologist did not question her about which other drugs she was taking and also did not know that the combination of the two drugs could, by preventing the body from getting rid of Seldane, cause toxic levels of Seldane to accumulate, levels that cause life threatening heart arrhythmias. Louise died of such an arrhythmia not long after she started taking Nizoral.

Larry, an otherwise healthy 58-year-old man with diarrhea believed to be due to “irritable bowel syndrome,” was given Stelazine, a powerful antipsychotic tranquilizer to “calm down” his intestinal tract. Stelazine is not even approved for treating such medical problems. Six months after starting Stelazine, Larry developed severe parkinsonism and was started on L-dopa, a drug for treating Parkinson’s disease. Presumably, the doctor did not realize, the parkinsonism was drug-induced, and the Stelazine was continued. For seven years, Larry took both drugs. Then a neurologist specializing in Parkinson’s disease saw Larry, recognized the real cause of his problem, stopped the Stelazine, and slowly withdrew the L-dops over a six-month period. Larry’s severe, disabling parkinsonism cleared completely.

None of these people were psychotic, the one justification for antipsychotic medications. Rather, the most common reasons for using the parkinsonism-inducing drugs were chronic anxiety and gastrointestinal complaints. The most frequent culprit (in 19 of these 39 patients) was metoclopramide (REGLAN), usually prescribed for heartburn or for nausea and vomiting. Doctors often prescribe Reglan before trying other more conservative and safer methods. (See alternative treatment of nausea and vomiting, p. 366). Other drugs that brought on parkinsonism included Compazine, Haldol and Thorazine.21

Sarah, wrote us about her father, saying that she had to repeatedly nag his doctor about the possible role of her dad’s ulcer drugs in causing confusion and hallucinations before the doctor listened. Three different drugs-Tagamet, Zantac, and Pepcid-had been tried for her father’s ulcers, and each had caused these adverse reactions. When the doctor finally switched Sarah’s father to an antacid, Maalox, his mind completely cleared and he was his old self, no longer confused or hallucinating.

Sally, the mother-in-law of a physician, was noted by her son-in-law, who had not seen her for several months, to have suffered severe impairment of her otherwise sharp mind. She was acting confused and, for the first time in her life, was unable to balance her checkbook. When questioned by her son-in-law, she was able to remember that her problem had started around the time she was put on a tranquilizer, Ativan. After this link was discovered, the drug was slowly discontinued and all of the mental impairment that had begun when the drug was started disappeared.

Ben, the 64-year-old uncle of a physician, was scheduled to have a biopsy done at a local hospital at eight in the morning. So that he would be relaxed for the biopsy, four days before it was to be done the doctor gave him a free sample of a tranquilizer, Xanax, to take an hour or so before the procedure. Ben was not told that he should not use drugs like this if he was going to drive and, while driving to the hospital for the biopsy, he blacked out. The car went over a fence and sustained $6,000 worth of damage, but fortunately Ben was unhurt. (See Drugs That Can Cause Auto Accidents, p. 28.)

Sixty-three-Year-Old Gets into “Drug-Illness Cycle”

Nancy, a healthy 63-year-old woman, complained about difficulty going to sleep. Instead of taking a careful history and finding out that she had recently started drinking several cups of coffee at dinner, her doctor prescribed a sleeping pill. A subsequent referral was also made to a psychiatrist because of depression (possibly partly induced by the sleeping pill), and an antidepressant drug was also prescribed. If’ this patient also took an antihistamine-containing drug for a cold (not an effective treatment), she would be using three drugs, all of which have powerful sedative effects, which could make her so groggy that standing would be difficult, and falling would be easy.