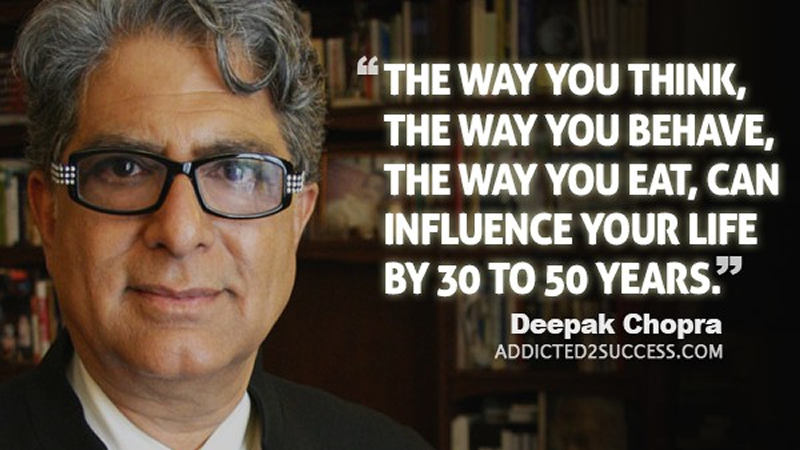 For the past decade Deepak Chopra, MD has been at the forefront of a major trend in holistic healing. Since the early 1980’s Chopra has successfully combined his impeccable credentials as a practicing endocrinologist with his exploration of mind/body medicine. By doing so, he has dramatically influenced many in traditional medical circles and helped bring the enormous benefits of holistic medicine to the general public’s attention. Chopra created a paradigm for exploring the healing process – a model he calls Quantum Healing. He recalls, “As doctors we are taught to prescribe tranquilizers for people who are feeling anxious to promote tranquility. We give sleeping pills to people with insomnia. Quantum Healing looks past all the wonder drugs and modern technology to a natural way of healing which speaks to an integration of mind and body.” Rather than turn his back on his conventional training, he extended his practice to bring together the best of ancient wisdom and modern science.

In 1984, he helped to introduce Ayurvedic medicine to the United States, and within a year he established an Ayurvedic Health Center of Stress Management and Behavioral Medicine in Lancaster, Massachusetts. He was also the founding President of the American Association of Ayurvedic Medicine. Since that time, he has emerged as one of the world’s leading proponents of this innovative combination of Eastern and Western healing. Chopra combines ancient mind/body wisdom with current anti-aging research to show that the effects of aging are largely preventable. By changing your perception of aging and by being aware of your body and how it processes intelligence and experience, you will change how you age. Today Chopra lectures around the world making presentations to major corporations and organizations such as the World Health Organization in Geneva, the United Nations, and London’s Royal Society of Medicine, as well as a number of major U.S. medical institutions.

Veronica: By changing one’s perception of aging, we can change our age. How?

Dr. Chopra: Well most people think that aging is fatal and scientific data shows that that’s not true. People don’t die of old age, they die of diseases that accompany old age, and they are preventable.

Veronica: You have stated that if we could effectively trigger the intention not to age, the body would carry it out automatically. Could you explain that?

If you can wiggle your toes with the mere flicker of an intention, why can’t you reset your biological clock? The reason most people can’t do it is because, first, they never thought of it and secondly they think that certain things are easier to do than other things. For example, it is easier to wiggle the toes than reset the biological clock, but that is just a belief that is rooted in superstition. If we could understand that the human body is a network of information and energy, then we would see that the same principles apply everywhere in the body.

Dr. Chopra: No, it’s the same mechanism. It’s just that we have been indoctrinated into believing that some things are easier, some things are more difficult. Expectations determine outcome, always!

Veronica: You have also said that our bodies are our experiences transformed into physical expression, in other words our bodies are the outpouring of our belief system?

Veronica: And we can change our interpretation or experience of the world at any time.

Dr. Chopra: That’s right. One person’s enemy is another person’s best friend. My favorite food might give you a rash, etc. Every experience that we have is unique to us because at some deep level we make an interpretation of it.

Veronica: You go even further and suggest that when you see yourself in terms of timeless, deathless being, every cell awakens to a new existence.

Dr. Chopra: Because the body is the end product of intelligence and how that intelligence shapes your reality will shape the reality of the body. The body is a field of ideas and it is a field of interpretations and when you change your experience of your own identity to a spiritual being, the body expresses the physical manifestation of that spiritual reality.

Veronica: You go on to say, true immortality can be experienced here and now in this living body. It comes about when you draw the infusion of being into everything you think and do. This is the the experience of timeless mind and ageless body.

Veronica: Is this why it is so important to live with passion, to have a dream, a reason for living, even if that dream is only for our own joy?

Dr. Chopra: I think that is a very important component, to have passion, to have a dream, to have a purpose in life. And there are three components to that purpose, one is to find out who you really are, to discover God, the second is to serve other human beings, because we are here to do that and the third is to express your unique talents and when you are expressing your unique talents you lose track of time.

Veronica: Most people think of time as linear and some of us feel that there is only so much of it, and that it is continuously running out. Almost as though our entire life is like an hour glass and the sand is running through and we don’t know how much sand we have left so we’d better enjoy every single moment. This kind of thinking is further reinforced every time we are faced with the death of someone we know. How does this kind of motivation, of enjoying every moment because time is running out, and we don’t have forever, compare with living joyfully without any kind of time anxiety at all, as if we really did have forever?

Dr. Chopra: The only way you can do that is when you know that part of yourself that is in fact, forever. There is a part of yourself that is not subject to change, it is the silent witness behind the scenes. That is essentially your spirit, the spirit being an abstract but real force. It is as real as gravity. It is as real as time. It is incomprehensible. It is mysterious but it is powerful and it is eternal. It is without beginning, without ending. It has no dimensionality, it’s spaceless, timeless, dimensionless, eternal, forever. When you can get in touch with that part of yourself, then you will in fact see that present moment existence, even an entire lifetime is nothing other than a flicker in eternity, a parenthesis in eternity, a little flash of a firefly in the middle of the night in the context of eternity.

What happens with that knowledge, with that experience, is that you begin to experience mortality as quantified immortality, you begin to see time as quantified eternity and when you see it against the backdrop of who you really are, then the anxiety of daily existence disappears. So one ceases to be troubled by as well as influenced by the trivial things of daily existence, the little hassles that create stress in most people. So it becomes much more joyful and you realize that the present moment is as it should be, there is no other way. It is the culmination of all other moments and it is the center point of eternity. So you pay attention to what is in every moment. And when you do that, then you realize that the presence of God is everywhere. You have only to consciously embrace it in your attention. And that’s what creates joyfulness. You have to know the reality and the reality is that we are eternal.

Veronica: I suppose then that the first way of looking at life is actually unhealthy.

Dr. Chopra: If you look at anything physical, you find out that at the quantum level, it is non-physical. The body is made up of atoms and subatomic particles that are moving at lightning speed around huge empty spaces and the body gives off fluctuations of energy and information in a huge void, so essentially your body is proportionately as void as intergalactic space, made out of nothing but the nothing is actually the source of information and energy. If you’d approach that level then you would realize that the body is a print out and by changing the software, by influencing the programming, and by getting in touch with the program you can create a new body anytime you want.

Veronica: How does living in the present moment contribute to agelessness?

Dr. Chopra: By quieting the mind which then quiets the body and the less turbulent the body is, the more the self-repair, healing mechanisms get amplified. In fact, scientists have shown that the better your DNA, your genetic machinery is at healing itself, the longer you live. That’s how meditation lowers biological age.

Veronica: What about the power of love in healing or agelessness, someone else’s love or the love of our own self?

Dr. Chopra: Yes, love but in the true sense, not as a mere sentiment or an emotion but love as the experience of unity consciousness, which means to know that you are connected with everything in the universe. Not only are you connected with everything in the universe, you might be the same being in different disguises with everybody else. So when you have that experienced knowledge you lose the ability to hurt people and you also lose the ability to be hurt by people. That’s love.

Veronica: Your approach to medicine is based on Ayurveda, which comes from India. How do you describe it?

Veronica: What will medicine look like in the future?

Dr. Chopra: Medicine in the future will give everyone the ability to become their own best healer.