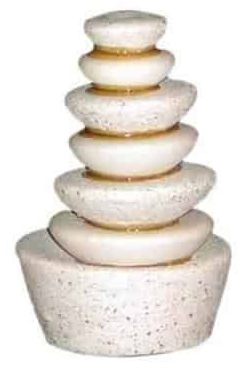 This four inch device can transform any bath tub or a hot tub into a rejuvenation station restoring hydration to every cell of the body. Dehydration = aging. Who would not like to rehydrate their cells?

I have been exposed to the ancient technology that is used in the manufacture of Twilight America and TransDerma Minerals products back in 2001 through products developed by Jim Carter. Jim called the company Twilight America, and later revealed that the name was not based on the emerging light of a new dawn, or the dawning of the age of Aquarius (do you remember the 1960s?), but on T.W.L.T., which stood for The Worlds Largest Test. Jim wanted to see if humanity could be rejuvenated in large numbers using the water structuring technologies he developed.

Jim spent a lot of time in his attempts to replicate an item that was given to him some 20 years ago. It was an ancient piece of ceramic art that came without instructions, only that it was producing liquid sunshine and that water treated with it was unusually moisturizing. You can read the full story of Jim’s discovery as it was recorded in Dr. Shealy’s book Holy Water, Sacred Oil. Jim spent nearly 30 years replicating and refining the ancient water treatment technology.

When I visited him in 2004, he handed me the original Artifact to examine it was emitting a very strong field of benevolent energy. I interacted with it intuitively and asked it to tell me how old it was. The reply I got was 4,560 years. That would be about the times of Moses. I drank the water treated with it, and I took the two naps and a bath in The Star Chamber (the Rejuvenation Station) that made me feel many years younger in a short two hour session.

We have the materials, we have the instructions, and finally, we are under way with clinical trials. One of these days people will have to start taking this woo-woo stuff seriously. Take a look at the Star Chamber Bundle. The Ultimate Water-Energizing Bundle: treat your drinking water, make your own magic water, energize the water in your bath or hot tub and release energy blockages, clear electromagnetic chaos.