What Is The Effect of WiFi Radiation On Us? 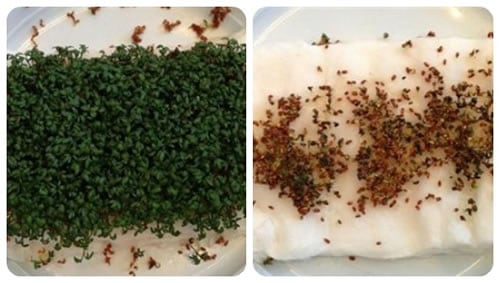 Can you tell a difference between these two trays of seeds? After 12 days of germination, one with and the other without exposure to wi-fi from a router. May I ask you to please help us replicate the experiment? Please sprout something close to and away from a source of electromagnetic radiation, and take pictures. Share it with the world.

It took the curiosity and the intelligence of ninth graders to come up with such a wild idea. You would expect the scientists working for the Cell Phone companies on proving that there is absolutely no biological effect from Wi-Fi radiation to run studies like this one. Five ninth-grade young women from Denmark recently created a science experiment that is causing a stir in the scientific community.

It started with an observation and a question. The girls noticed that if they slept with their mobile phones near their heads at night, they often had difficulty concentrating at school the next day. They wanted to test the effect of a cellphones radiation on humans, but their school, Hjallerup School in Denmark, did not have the equipment to handle such an experiment. So the girls designed an experiment that would test the effect of cellphone radiation on a plant instead.

The students placed six trays filled with Lepidium sativum, a type of garden cress into a room without radiation, and six trays of the seeds into another room next to two routers that according to the girls calculations, emitted similar amount of radiation to an ordinary cellphone. This has sparked quite a lively debate in Denmark regarding the potential adverse health-effects from mobile phones and WiFi-equipment, Kim Horsevad, biology teacher at Hjallerup Skole told ABC News.

Horsevad said that some of the local debate over the experiment has been over whether the negative effects were due to the cress seeds drying from the heat emitted by the computer/WiFi routers used in the experiment. But she explained that the students kept the cress seeds in both groups sufficiently moist during the whole experiment, and the temperatures were controlled thermostatically. Over the next 12 days, the girls observed, measured, weighed and photographed their results. By the end of the experiment the results were blatantly obvious while the cress seeds planted in the room away from the routers sprouted, the EMF radiation exposed seeds did not.

The experiment earned the girls (pictured below) top honors in a regional science competition and the interest of scientists around the world.

I did a related experiment with my daughter, showing the effect of EMF protection devices (either a sticker or a stone ring) on body balance, and recorded it on a video. You can read more about the EMF Protection Devices on our website.