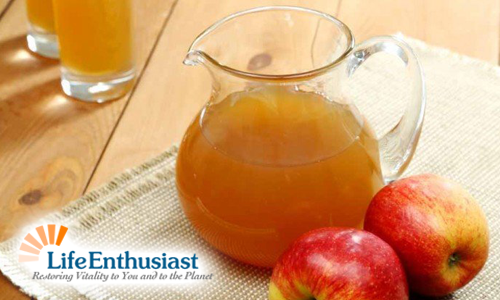 We all know the saying an apple a day keeps the doctor away, right? While the saying does not literally promise that a daily apple will forever keep you out of the doctor’s office, we understand the hidden message behind it: real food is the way to go. Consuming food in the most natural form possible comes with great health benefits. Some people might argue that man made vinegar, sold in a glass bottle with a bright colored label couldn’t be further away from the natural state of an apple, but we are living in a modern world where convenience sometimes has to come first, especially when we know the processed form comes with such significant benefits!

Apple cider vinegar is a wonderful tool; it serves as a multi-purpose elixir and a remedy that was known and used even back in the times of Hippocrates. Vinegar in general is not too far from real food actually. It is a product of fermentation, a process that happens in carbohydrate rich foods when bacteria feed on sugar to create alcohol, and if you let that process continue even longer, alcohol is turned into vinegar. Just like fermented foods such as sauerkraut, kimchi, or kombucha, vinegar has probiotic benefits. You can read about all the benefits of fermented foods in the post we made not that long ago, but I think apple cider vinegar with all the positive effects it has on the body deserves more attention.

Crushed apples (or just scraps you usually throw away like peels and cores) are pressed to extract the liquid, colonized with bacteria and yeast, and fermented twice to create apple cider vinegar (ACV). When you purchase high quality, raw, organic, and unfiltered ACV, it usually comes with a blob of friendly bacteria at the bottom this is called the mother and it also looks cloudy in the bottle. Industrially made ACV is sold as a clear, bright amber colored liquid without the mother bacteria in it, because after the fermentation process, it is pasteurized to kill those bacteria. Why? Its a simple marketing trick it looks prettier in the bottle.

Lets be honest, we all usually try to pick the nicest looking apple or tomato, even though we realize that the slightly uglier one has the same taste and vitamin content. We usually don’t touch things before we look at them, right? Our vision is the first sense that is used in contact with the world. Cloudy, muddy water with some dirt floating around is not as appealing as a crystal clear glass of water that screams drink me! I am so refreshing! That is a natural thought process and in fact can save us from drinking dirty, polluted water, but with ACV, we really want that ugly, murky bit.

The mother bacteria colony is what gives ACV the probiotic properties that are killed during the industrial preparation and pasteurization of vinegar. Manufacturers also use mechanical oxygenation to speed up the fermentation process, and there may also be colorings added to the product, like caramel for a brighter color or sulfites as preservatives. Traditionally made apple cider vinegar has none of these additives, and if you really want to be sure to get the best quality, you can easily make your own at home!

Acetic acid is what makes apple cider vinegar taste so sour and smell funky, and it is also a very important component of the vinegar. Acetic acid as a byproduct of fermentation is able to change the pH of the body, which may be helpful for some people with specific digestive issues. It was proven tohelp with weight loss and also to reduce cholesterol, though this study was only formally performed with rats so far. Rodent studies showed some positive data indicating an anticancer effect and improvement of heart health. Even though ACV has been used for many years now, scientific studies have not been done in humans to back up the anecdotal evidence, but that doesn’t mean the evidence of experience (dating back to Hippocrates) is not real.

Probably the most known use of ACV is as a remedy for digestive issues, such as acid reflux and heartburn. Gastroesophageal reflux disease (GERD) can be relieved by ACV intake. Those who suffer with acid reflux are also recommended not to drink too much water during their meals so they do not water down their stomach acid. This may sound like a contradiction to popular recommendations, but to quote Chris Kresser on this issue: Heartburn and GERD are not caused by too much stomach acid. They are caused by too little stomach acid and bacterial overgrowth in the stomach and intestines. Therefore successful treatment is based on restoring adequate stomach acid production and eliminating bacterial overgrowth. GERD can also be a sign of undiagnosed Celiac Disease or other food allergies, so take note of what you’ve eaten just before you experience these symptoms, and follow up with your practitioners if needed. It should also be noted that if your respond to ACV with flushing, hives, itching, bloating, or other symptoms associated with allergies that you may want to consider the possibility of Histamine Intolerance or Mast Cell Activation Disease.

Drinking water with ACV is an effective way to eliminate acid reflux symptoms, soothe your digestive system, and even help you digest starch, which prevents gas and bloating. Just start with one teaspoon of ACV in a glass of water on an empty stomach before your meal. Don’t ever drink vinegar undiluted it might be too aggressive on not only your digestive system, but also your teeth. Many people recommend drinking the ACV water with a straw to prevent the contact of acetic acid with your tooth enamel. ACV can also be used to kill some pathogenic bacteria in the body, fight candida, and generally help with yeast overgrowth.

Apple cider vinegar with all of its beneficial components is very often used as a natural skin care remedy. For example, it is very effective against dandruff as it balances out the pH of the scalp, helps remove product buildup, and promotes shinier, healthier hair. Just dilute a tablespoon of ACV in warm water, rinse the hair with this mixture after shampooing (a squeeze bottle of some kind will make this easier), and rinse it out with water. Apple cider vinegar is an excellent face toner and acne treatment that does not dry out the skin like most acne remedies do. Very often we believe that acne is the result of oily skin, and many conventional acne treatments tend to reduce the natural oil production of the skin. Stripping the naturally produced oil from our skin breaks the protective layer of natural moisture, and to compensate for this, our skin starts producing even more oil. While it is true that too much oil sitting on top of the skin makes you more prone to acne, as pores can get clogged and infected more easily, it is more effective to support your body in maintaining its intended oil barrier than to play the game of daily stripping and artificially moisturizing the skin.

Apple cider vinegar can be applied directly to the skin as a spot treatment, all over the face and neck as a pH balancing toner with antibacterial properties, or it can be added to bathwater along with some essential oils for those of you who aren’t fond of the smell (lavender works great here). I keep a glass bottle with a spray lid in my fridge with a 50/50 mixture of water and ACV with a few drops of lavender oil and use it as a toner after cleansing my face. The smell is gone once it dries, trust me. For sensitive skin, the 50/50 ratio might be too much, so start with one part vinegar and three parts water. For more oily skin, the higher ratio of ACV works better. Don’t use undiluted ACV on your skin though, it may be too harsh even if you don’t have sensitive skin.

Bug bites and sunburn can also both be treated with an apple cider vinegar solution! Other lesser known uses include treating nail fungus, jellyfish sting relief, easing constipation, helping to stop hiccups, soothing rashes and eczema, disinfecting wounds the list goes on, and even though there are no scientific documents to prove these claims, personal experiences have their own strong value.

You don’t have to just drink ACV with water to get your daily dose. Make apple cider vinegar your kitchen staple and use it like you would any other vinegar, for example in salad dressings and vinaigrettes, or marinades. Adding apple cider vinegar to other ingredients while making bone broth helps to release all the minerals and collagen from the bones. ACV is also an excellent leavener in baked goods when combined with baking soda. In our kitchen, we use apple cider vinegar to soak our produce in for 5 minutes to remove mold, parasites, and bacteria from our fruit and veggies, as well as pesticide residue we really don’t want to consume. We learned this trick here. I also clean my cutting boards and kitchen counter with an apple cider vinegar and water solution and from time to time use it to remove the limescale from the inside of our kettle. Check out this amazing list of uses for ACV in your home some of them might surprise you!

There are so many reason why you should keep a bottle of apple cider vinegar in your pantry at all times! It is very inexpensive and very multi-purpose. Try ACV yourself and experiment with it; buy a raw and organic brand like Braggs or have fun with making your own! You don’t have to throw away apple cores keep them and turn the waste into something wonderful!