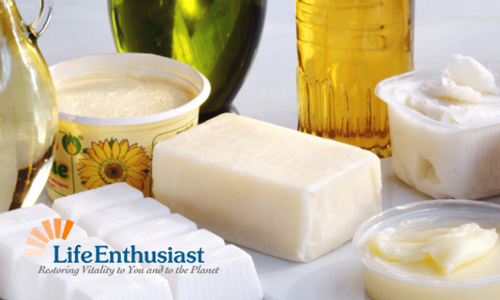 Fat. Even the word itself oozes with negative associations. Just say it out loud. Fat. What comes to your mind first? I doubt it is something cute or enjoyable. FAT. We’ve been given so much bad (and wrong) information about fat, that we tend to fear it, avoid it, and remove it even from foods that are naturally fatty (skim milk, anyone?). We are cutting the fatty pieces off of our meat, we are looking for low-fat options in the yogurt aisle, and we are constantly looking for a way to remove those fat layers even from our own thighs and bellies. We were taught to diss fat in every way, shape, and form. Fat makes you fat! we hear, or animal fat will clog your arteries. These dogmas were born over a hundred years ago, after partial hydrogenation was invented in 1900, and greater market saturation followed when margarine production doubled from 1920 to 1950. But now it is time to put these beliefs to sleep, just as we did the Earth is flat opinion in the past (and that one was believed to be true even by the smartest people back then). Forget everything you think you know about fat and learn about why avoiding healthy sources of fat might be the thing that’s blocking your path to optimal health and mental well being.

Fat is vital for our health. Every cell in our body needs fat: it is a crucial building block of our cells, along with cholesterol (we will talk about that later). The quality of the fat we consume in our diet reflects the quality of our cells, tissues, and organs. Our brain is composed of almost 60% fat, so eating quality fats is important for proper brain development and function. Our bone marrow is also made of saturated fat, so in order to have these organs and tissues rebuilt, we need to eat saturated fat. And of course, we cant forget the role that fat plays in the quality of our skin, hair, and nails. Like we said before every cell in the human body needs fat. Whole grains will not replace the need, unfortunately for food manufacturers. The saying you are what you eat gets a completely new meaning here. Fat is a building block for cell membranes, hormones, and the nervous system. Neurons are covered in protective coating (called myelin sheaths it’s like the plastic coating on electrical wiring that keeps the signal on course) that is 80% made of fats, and a very low-fat diet can actually damage our nervous system by not giving us enough nutrients. Some have suggested there may be a link between Alzheimers and low fat diets.

Fat is our primary source of stored energy, so when we run out of sugar in the bloodstream, our body starts burning stored body fat for fuel (and voila! Healthy fat loss). Fat is also more satiating than protein or carbohydrates, because it stays in your body longer, as it needs to be broken down through multiple processes in the body (in stomach, liver, gallbladder, small intestine, and pancreas). Fat will also give your body more than double the energy than the same amount of carbs or protein, because fat contains 9 calories per gram, while protein and carbohydrates only contain 4 calories per gram. Fat helps with digestion (provided your gallbladder isn’t compromised). It is not soluble in blood and it stores all the fat-soluble vitamins like A, D, E, and K in our liver. Without fat, our body could not absorb and use these vitamins. In nature, fat usually comes along with fat-soluble vitamins. For example, raw milk is full of fat and these vitamins. If we remove all the fat from milk to get a low-fat skim milk, we basically only get a white liquid with no significant nutrients. So usually vitamins are added back to the milk after all the fat is removed. This may sound smart, but without the fat, our bodies will not be able to digest, store, transport, and use these vitamins so its a total waste.

There are plenty of options on the market when it comes to fats and oils, along with general confusion about which of them are healthy and which are even dangerous. The truth is that most health recommendations about fat consumption are based on myths that were considered true for a very long time, even by medical authorities, and they often times still resonate with people, standing in our way to healthy living. But most of these myths started for the one and only reason profit. Food manufacturers care about profit, not human health. Mother Nature has everything ready for us, everything we need. Every nutrient we will ever need to thrive and stay healthy comes in the natural packaging of either plant or animal. You can get plenty of good fat from plant sources, but you have to consider the source and manufacturing process. With animal fats like lard and tallow, you want to consider what the animal was fed because toxins accumulate in fat stores.

We know we should avoid gluten, sugar, and highly processed dairy products, but we tend to forget about the dangerous oils in our diet. When we eat out, it is relatively easy to ask for a gluten-free option or to stay away from sugary desserts, but we usually don’t even think about the oils they use to cook our steak or veggies. Even homemade French fries are usually made with these processed, industrial, damaged, unsaturated oils like soybean, corn, cottonseed, canola and more. These oils can be more dangerous than sugar or a little bit of flour (of course if you have a Celiac disease, NO amount of flour is safe for you), they are highly inflammatory and one of the dangers is the fact that we do not really think about them as dangerous, because they were pushed as heart-healthy for so many years.

With fast food fries it is not the potato that is the problem, not even the process of deep-frying, it is all about the oil used for frying. McDonald’s used to use lard or tallow back in the day. The reason for them to stop was not because lard was bad in any way, but vegetable oils were way cheaper, trendier, and also people who do not consume animal products did not want their potatoes cooked in animal fat. If McDonald’s started using lard for fries again, would you get some from time to time? I sure would not fear to eat a few occasionally, but the current use of processed crop oils in Happy Meals for small children scares me!

Saturated fats are called saturated because they have strong bonds within the molecule and contain the maximum possible number of hydrogen atoms. These fats are usually solid at a room temperature (think lard, tallow, butter, or coconut oil), while unsaturated fatty acids are very unstable, fragile, and generally come as a liquid at room temperature so we call these oils. Unsaturated acids are then recognized as either mono- or polyunsaturated, depending on a number of double bonds between atoms. The more double bonds it contains, the more unstable and prone to oxidation the fat is. Stable fats like SFA are a great choice for cooking, because they stay stable even at a high temperature, while MUFA and PUFA do oxidize easily even on a very low temperature, creating free radicals that cause inflammation in the body by damaging our cells.

If you have a bottle of a flaxseed or olive oil at home, did you ever wonder why is it sold in a dark bottle? It is because even sunlight makes these unsaturated oils oxidize. If your cooking oil is in a transparent bottle, chances are the oil is rancid already, and you didn’t even open the bottle yet. Heat, air, and sunlight damage those unstable structures even more, so I highly suggest NOT to cook with these fragile, highly processed oils. Extra virgin olive oil is a great choice for a salad dressing, but if you love your sweet potato fries once in a while, do not cook them in vegetable oil. Vegetable oils are highly processed and they are cheap for a reason. They do not give you any nutrients and they might potentially hurt you. See, I used the usual term vegetable oil.

In fact, these frankenoils do not even deserve to carry that name soy is not a vegetable, its a legume. Corn is a seed, not a vegetable. Canola and cottonseed oil are made of seeds. Soy, corn, canola, and cottonseed are also among the most common GMO crops produced with disturbing amounts of pesticides and herbicides. Margarine and trans fats are NOT made of vegetables either! They are all so highly chemically processed because there is no way you can get oil from these plants just by mechanical processing, like cold pressed oils (like olive and coconut). Trans fats and margarines were made as a substitute for butter. At the end of the 19th century, a French chemist was asked to create a cheaper alternative for butter, using beef fat and skim milk. While this creation worked for a while, very soon partial hydrogenation was developed, a chemical process that was able to create never melting, plastic-like, odorless, and tasteless industrial oil shortening. While saturated fats like butter or lard melt at room temperature, these new hydrogenated trans fats didn’t.

It was easy to spread them on toast even straight from the fridge and they were easy to make. The idea here was, that solidified vegetable oils would not be as prone to oxidation as their liquid alternatives, but the chemical structure of the fatty acid is broken during processing, creating a whole lot of unexpected and unwanted damage in the body; they are really poisonous and dangerous for our cells. And we know that what hurts our cells, hurts the whole body! There is a trans fat called CLA (conjugated linoleic acid) that is the naturally occurring trans fatty acid our body actually needs and can get from sources like coconut oil or animal fat. Man-made trans fats are not a substitution for CLA, they are a criminal in disguise. If you feel like throwing away all the processed crop oil and margarine from your kitchen, don’t hesitate to do so, but make sure you read Part 2 of The Fat story where you will learn about the best fats and oils that can replace your current stash of vegetable oils. We will also debunk some serious misconceptions about one of the most demonized compounds in our diet cholesterol. Stay tuned!